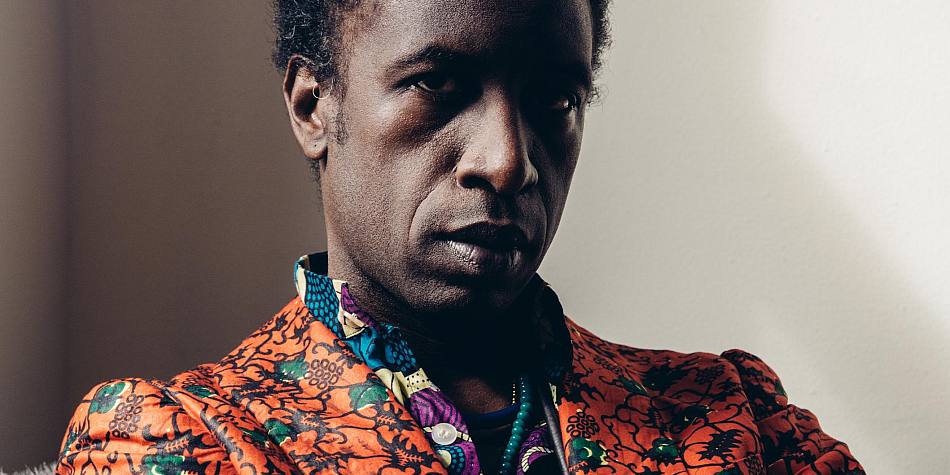 Musician, artist, poet and actor visited Iowa City on the fifth day of Mission Creek, and he blew our minds. After performing at prestigious venues like the Sydney Opera House, The Louvre, and the White House, Williams joined Mission Creek artists at Prairie Lights and The Mill to perform his craft.

While most of the other events I’ve attended during the festival have highlighted music, with or without words, this event mixed spoken word art, singing without music, and hip hop music. The night began with local spoken word artist Lovar Davis Kidd, whose pieces discussed issues of art, blackness, and family. In one piece, he impressively tap-danced and performed his poem at the same time!

Rather than moving from one artist to another, Lovar Davis Kidd and the second opener, Akwi Nji, made the choice to switch back and forth between the two creating a more fluid performance. Their pieces found similarities in each other’s and together, and working together they previewed the rest of the night well.

Nji performed several pieces about raising two daughters in today’s political climate. She encourages them to create within a world that insists on destruction of their self-esteems, and prepares them for the nature of society. Nji also performed a piece regarding the reputation of her neighborhood in Southeast Cedar Rapids, which intrigued me. She pointed out the problematic assumptions about the area, mocking people who called them “thugs” and “gangsters.” However, the most powerful part of the poem was portrayed through her interpretation of the interconnections between neighborhoods and the world. She argues that people isolate areas and separate themselves from problems, when in reality, the problems in Southeast Cedar Rapids extend to many other parts of the world.

After the two spoken word poets, I assumed the next opener, Psalm One, would also perform poetry. She hung a banner on stage behind her which read “Psalm One Loves You” which led me to believe her art would consist of positivity and love. When they came on stage, the woman whose face was on the banner was accompanied by another woman in a bra/bikini, skirt and skimask: I was pretty excited at this point.

Although only two women stood on the stage, the performance was the most engaging show I’ve seen at Mission Creek. The woman in the ski mask, Angelica, operated the computer and provided the vocals, while the rapper, Hologram Kizzie, owned the rest of the stage. The Chicago group sang songs which empowered women, opposed the government, and roused the audience as they danced and jammed along.

While I loved listening to Psalm One, I’m not sure if organizers made an informed decision about the order of the show, or asking them to open for Saul Williams who only performed spoken word. The crowd thoroughly enjoyed Psalm One, but the stark difference between Williams’ show and the previous performance was jarring.

That being said, Mr. Williams was incredible. One of the first things he said when he came on stage was that he wished he had brought his computer if he had known Psalm One would perform music. However, despite the contrast, audiences settled into the new art form.

I wanted to write down every word he spoke, but my pen couldn’t move that quickly. He incorporated such visceral body images and connected them to diction about geography and the earth, conveying his theme of unity. His first piece encouraged people to “hack into” various social constructs, systems and institutions which combined technology and anthropocentric themes.

After these short pieces, he sang a song called “Burundi” and a few others. Throughout the show, he paused in the middle of pieces to discuss the meaning of certain lines, but he spoke so poetically that I often couldn’t differentiate between a poem and his regular speech. For example, a line from his poem about whitewashed history: “fuck your history teacher, I have never been a victim.” A quote from his casual speech: “a leaderless movement cannot be quelled.” The night was filled with inspiring words like that, and “the greatest Americans have not been born yet.”

Williams hosted a great show last night, despite the audience’s rude behavior. A woman in the front row insisted on reciting some of his poetry with him, and interrupting him, and even filling in lines if he inserted pauses in a piece. Other people refused to sit with the silences he so deliberately placed, and asked questions and threw out unnecessary comments.

Williams remained gracious throughout the night, but as a reminder to show-going populations: these are not interactive events. People came to see Saul Williams perform, not you. Please be respectful to performers and let them portray their art in their way!

To learn more about Saul Williams, visit his official website and stay updated on his activities and art on Twitter!