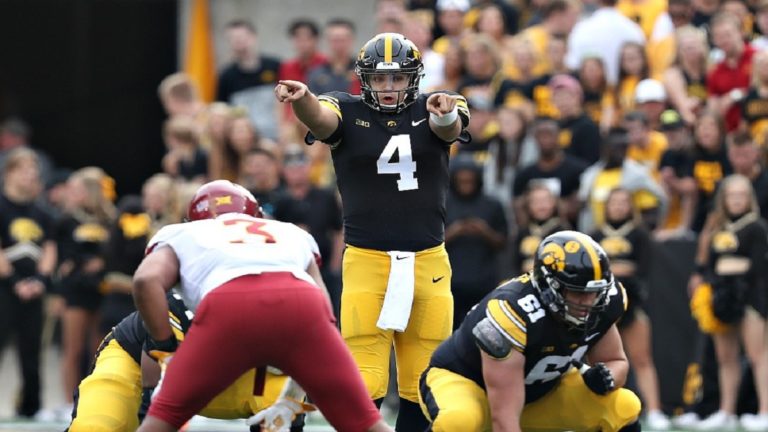 It’s been a fun week of playful trash-talk, but since we’re now in the period of time where people are taking it too seriously, it’s time to see what’s expected on Saturday.

It’s obviously the most anticipated Cy-Hawk game in the history of the series, especially with ESPN’s College Gameday on-site in Ames for the 1st time ever. People will be giddy over whether or not Coach Corso dons Cy or Herky at the end of the show.

Fortunately, as Kirk Ferentz alluded to in his weekly press conference, what happens on College Gameday has no bearing on the game. Both teams still have to go out and play their best brand of football for 60 minutes.

With that in mind, there are three story-lines to watch on Saturday in Jack Trice Stadium.

The beginning of the 2019 season has not been kind to Iowa’s secondary. Outside of captain Michael Ojemudia, the Hawkeyes have battled injuries since the start of fall camp.

The most notable is the status of Matt Hankins, who was nicked up in Iowa’s win over Rutgers on Saturday. Kirk Ferentz didn’t comment on his status at his weekly press conference but later said on his weekly radio show that they would “play it by ear”, when talking of Hankins status.

It would be a big blow for an Iowa secondary that is already missing their #3 and #4 corners in Julius Brents and Riley Moss due to injuries. That leaves young guys such as DJ Johnson and Terry Roberts as the next up.

The thin secondary will have to work to keep Iowa State receivers covered, especially with talented receivers such as Arkansas transfer La’Michael Pettaway and Deshaunte Jones, who had a phenomenal performance against UNI.

Can the Cyclones get it done on the ground?

With Montgomery off to the NFL, fans saw Iowa State use four different running backs in their triple overtime win against UNI. Based on performance, I would expect to see a lot more of Sheldon Croney Jr., and true freshman Breece Hall on Saturday.

The Cyclones also have other options on the ground with veteran players such as Johnnie Lang and Kene Nwangwu and another true freshman back in Jirehl Brock.

Iowa State struggled for three quarters to sustain a rushing attack against an inferior UNI defensive line, which leads me to believe that it could be worse against a front as talented as Iowa’s.

However, if Iowa State’s offensive line can get some push back on Iowa’s defense, there might be something to work with for the Cyclones rushing attack.

This is the biggest match-up of the game right here. We know that Iowa’s offensive line against Iowa State’s defensive line is a match of two immovable objects. But, this match-up will have more meaning for a couple reasons.

If Iowa State wants to win this game, they cannot be forced to play Iowa’s style of football. The Cyclones will have to look to get chunk yardage plays and big, downfield plays as well. If Iowa State’s offensive line can deliver time for quarterback Brock Purdy, that idea can be realized.

However, if the Cyclones offensive line falters and Iowa has their way with them, this game will go in the favor of Iowa. This will cause Iowa State to play a field position game. While Matt Campbell is good at this, there’s just one problem: Kirk Ferentz is great at it.

The Cyclones offensive line has to show up if Iowa State is serious about ending the four-game skid against the Hawkeyes.

So naturally, as man who has watched many a Cy-Hawk game in his life, this game will be the defensive grudge-match that no one is wanting.

These are two defenses that will likely end the season in at least top 30 in the nation. No sense in expecting the offenses to be the focal point, this will be a scrappy, knock ’em down, beat ’em up football game.

In the end, I believe Iowa’s defense and the veteran leadership of Nate Stanley will give them their 5th win in a row over the Cyclones.