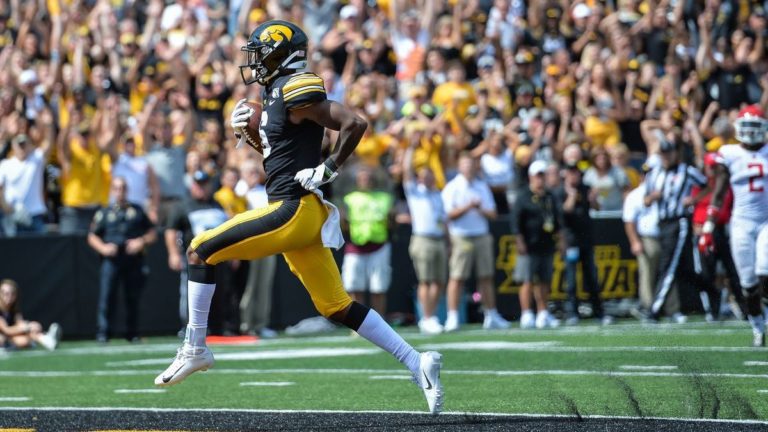 Iowa blanked Rutgers, 30-0, in front of a crowd of over 61,000 at Kinnick Stadium on Saturday. All three phases had great success, but it was the special teams unit that stole the show.

Rutgers punter, Adam Korsak, did all he could to stifle the Iowa offense in the contest, booting seven of his 10 punts inside the 20 yard line. Due to his precision – and plenty of help from his hands team – the Australian marksman downed Iowa inside its three-yard line four times. In fact, when beginning a drive after a Korsak punt, the Iowa offense averaged a starting field position of its own 19-yard line.

“Our focal point was to try and create more space around the back end zone and get a little more room,” Brandon Smith, junior wide receiver, said. “Then we could hit them with some hard plays and deep balls.”

Despite the heroics by the transfer from down under, the Scarlet Knights put on an abysmal display on both offense and defense, handing Iowa its first shutout victory since the 63-0 demolition in Champaign last season.

Nate Stanley led the offense to a dynamic offensive showing, tallying 236 yards and three scores to cap off another solid day for the signal caller. He found junior wideout, Ihmir Smith-Marsette, four times for 113 yards and a pair of scores. The Hawks are now 9-0 when Stanley tosses three or more touchdowns.

“I think the offense played great,” Smith said. “Ihmir had two [touchdowns], Tyrone [Tracy, Jr.,] had one. Once we got it all together and built some drives, we were pretty good.” Smith was targeted a team-high seven times, but hauled in just two catches. He did, however, draw multiple defensive pass interference calls against the Knights’ top corner, Damon Hayes.

Rutgers’ struggles on the defensive side of the ball are nothing new, allowing an average of 32.4 points per game in the Chris Ash era. This inability to keep the points down requires audacious efforts from the offensive unit and the talent pool is even shallower in that department.

Starting quarterback, McClane Carter, overthrew his way to a 5-for-15 first half, finding a spot on the bench by halftime. His replacement, sophomore Artur Sitkowski, has a rancid history behind center, notching four touchdowns and 18 interceptions in his forgettable freshman campaign. The underclassman came in for the second half to post 19 passing yards and an interception into the hands of sophomore linebacker, Djimon Colbert.

“Our defense is like a well-oiled machine,” Colbert said. “You can take one part out and put another one in without missing a beat.” Colbert snagged the first interception of his career after some manic pressure by A.J. Epenesa.

Speaking of Epenesa, the former five-star recruit barrelled his way into the contest, recording a sack and four quarterback hurries, as well as opening up gaps for pass rushers like Chauncey Golston, Nick Niemann and Kristian Welch.

“There were a couple plays where [Epenesa] was really after it,” Colbert said. “It was great to see. All positive things.” Epenesa was unusually quiet last week for a player of his caliber, but managed to turn it on against Rutgers after being touted as a future top five draft pick, per Mel Kiper, Jr.

The Hawkeyes pounded the Scarlet Knights both offensively and defensively, but the special teams looked to match Rutgers’ successes as well. Iowa transfer punter, Michael Sleep-Dalton, launched six punts for an average of 48.3 yards each, pinning two inside the 20. Keith Duncan got in on the action, too, nailing all three of his field goals, including two from 40+.

The domination came down to talent and Iowa undisputedly possesses more of it. While the team isn’t built of five-star blue chippers, the Hawks are able to develop what they have into a squad capable of Big Ten success.

“If you come out and play physical every down, they’re bound to get tired of us,” Smith said. Iowa gobbled up time of possession, garnering 38 minutes of ball time. The defense was simply too much, forcing seven three-and-outs and three turnovers.

“We love playing in Kinnick Stadium,” Colbert said. “We love the energy. It’s our job to get off the field. It feels good [to get a shutout], especially early on in the year. It’s a big confidence boost.”

Starting 2-0, the Hawkeyes travel to Jack Trice Stadium for the annual matchup with Iowa State. Both teams ought to be ranked for the first time in the matchup’s history and, in all likelihood, Ames will get its first ever College GameDay.

“They are all tough. There’s nothing easy about playing college football, just ask any player,” head coach Kirk Ferentz said. “But every preparation is important and they are all going to be challenges. That’s how I look at it. I don’t see any easy outs on our schedule.”

The Hawkeyes look to win their fifth in a row against the Cyclones, a feat not accomplished since they won 13 straight between 1983 and 1997. For now, though, Iowa basks in the glory of yet another Big Ten shutout.