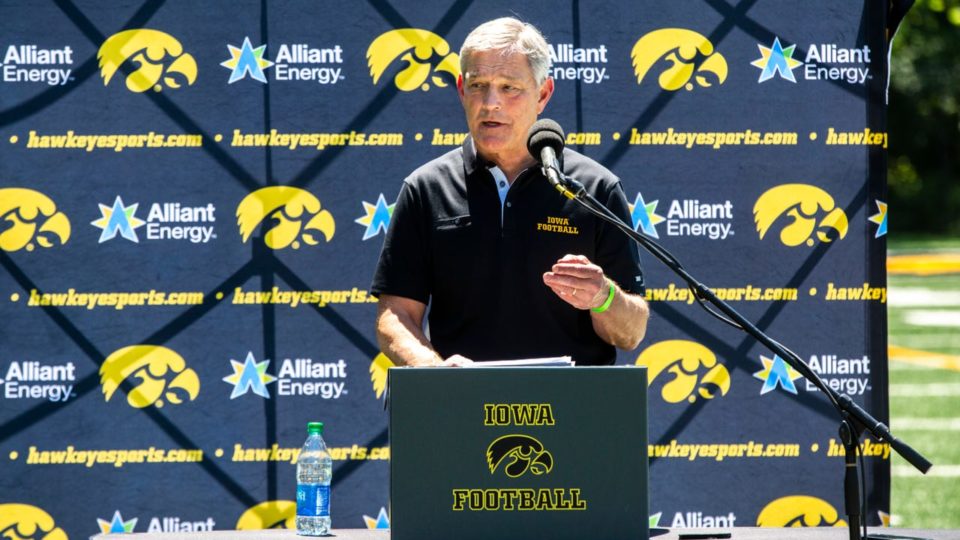 Since 1979, there’s been little change on what the exterior of Iowa football has looked like. A tough, smart, physical football team that wore you down and did all the little things right, on and off the field.

On the interior, the changes made over the past week is more than many fans would ever think to see in a 40-year time span. Between morale, expression and unity, Iowa football is in a very different place than it was on Thursday, June 4th.

At Friday’s press conference outside the Hansen Football Complex, the word “change” was used again and again and again, but it was used for all the right reasons. Flanked by sophomore safety Kaevon Merriweather, junior running back Ivory Kelly-Martin and senior kicker Keith Duncan, Kirk Ferentz delivered an update on the state of the program.

“We spent Monday in meetings, instead of a workout. The players did most of the talking: it was raw, it was powerful and productive,” Ferentz said. “Everything was on the table, it got somewhat heated and somewhat emotional at times, and I think that’s good.”

The meetings on Monday came after the suspension of strength and conditioning coach Chris Doyle, amid allegations that Doyle made racist and belittling comments to black student-athletes. Ferentz did not give a comment on Doyle in fairness to the ongoing investigation.

Many have called on Ferentz to take blame for what happened in his program, and he did so at Friday’s press conference.

Another big topic was the nature of the tweet sent out by Kaevon Merriweather on Monday.

When asked about the nature of the tweet, Merriweather went into further explanation.

“The tweet was about the Iowa community, we wanted to let them know that our team is together as one and we expect our fans to be their with us every step of the way,” Merriweather said.

The tweet did result in some backlash as it appeared Merriweather indicated that the team would be kneeling for the national anthem this fall in solidarity with the Black Lives Matter movement.

As for senior kicker Keith Duncan, as optimistic as he was about the future, he stated that not all of the blame was on the coaches for what had happened in the Iowa program.

“I would take complete blame as players, because a majority of the people in the building are players,” Duncan said. “We need to speak up more, if we see something, I would never put all the blame on Coach Ferentz, he is not able to see all these things, we see everything.”

While Duncan did take some of the blame as a leader, he stated that the unity of the team never wavered.

“I think the unity was always there, I think it was the communication was something that we could improve on,” Duncan said. “We’re a very tight group: players, coaches, it’s a family, it really is. I’m very excited to be on the team, we’re all excited to push forward and see what we can do.”

One of the many allegations made against the atmosphere in the Iowa program was that black student athletes felt like they were “walking on eggshells” whenever they were in the facility, junior running back Ivory Kelly-Martin went further in detail.

“Yes, it felt like that, it was an atmosphere where you did have to look out and watch your back and just had to be on your toes at times,” Kelly-Martin said. “But throughout this week there have been so many conversations had about change and these last couple days in the weight room and on the field, we can see a clear difference between how it is now and how it was before.”

The college football world has kept a keen eye on what’s happened in Iowa City over the last seven days, ideas split among those across the country whether this is something Kirk Ferentz should lose his job over. But, in a conversation with a new player, Ferentz stated that thought is not what’s in his player’s heads.

“I was talking to one of our new players this week, told him it was certainly a tough time to join the program coming in,” Ferentz said. “I was encouraged by his response, he said ‘Coach, I’m excited to be here, and we have a chance to set the bar for college football.'”

The word “change” has never had a bigger meaning for Iowa football than it does right now.