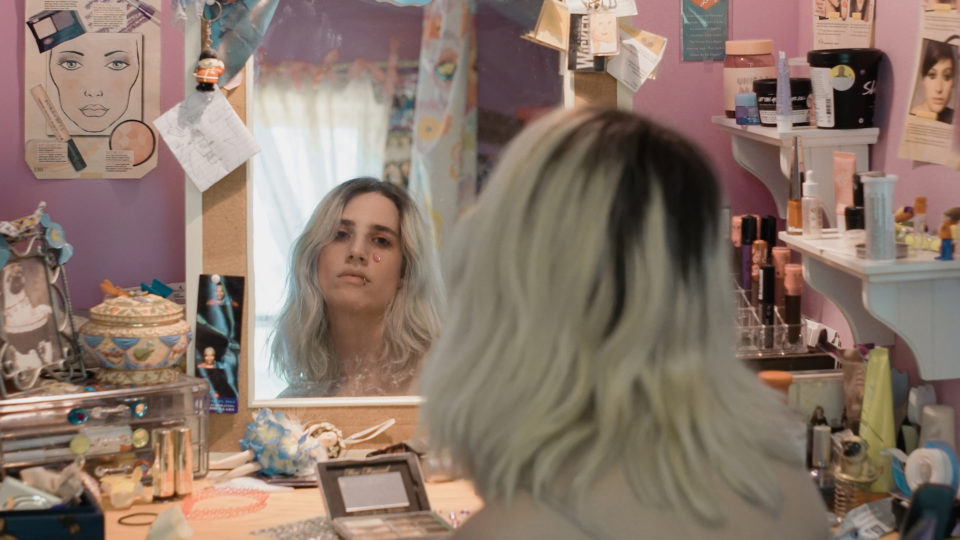 Sir Babygirl demands your attention. The new indie pop project from Kelsie Hogue (who uses they/them pronouns) is a DIY pop-strocity. Songs on their new album, Crush on Me, range from pop-punk (the punchy Flirting with Her) to classic indie pop (the title track) and almost everything in between.

Hogue seems equally inspired by 90’s pop artists like Mariah Carey and Avril Lavigne. Their songs crush up these influences and grind them into a mixture of all pop, culminating in a sound full of gargantuan hooks and effervescent pop.

Nothing demonstrates Babygirl’s talents like the opening track on the album, the outright banger, “Heels.”

With a driving beat and piercing vocals, “Heels” is the epitome of Sir Babygirl’s blatant extra-ness. The song is absolutely intoxicating when Hogue goes into their high register to sing “I changed my hair,” stretching out that final word until it becomes a scream. When I first heard that sound, everything Hogue was doing coalesced. I sat up and realized the truth about Sir Babygirl. They simply do not care how anyone views them.

The entire album, and specifically “Heels” itself, feels centered on the idea of living a life free from expectations. The song’s breakup narrative feels secondary to the triumphant act of finding oneself. When Hogue sings about changing their hair, it is not a simple dye-job. It is a declaration of independence and self-assurance. Although, they probably also dyed their hair, which is often a striking neon green.

Sir Babygirl’s abhorrence of judgement and lack of traditional expectations may stem from Hogue’s status as a non-binary artist. The entire Sir Babygirl project is unabashedly queer, with the bisexual Hogue mostly writing about female love interests.

Using pop as their canvas, Sir Babygirl cuts through the heteronormativity of pop and does it with a smile. Look at the gender presentation being twisted in the “Crush on Me” video, as Hogue inhabits both gender binaries.

Sir Babygirl eschews the male gaze and centers on the female perspective. It’s a welcome relief to see someone in pop at least attempting to upend these norms. Sir Babygirl tends to do so in startling ways.

Just look at the video for the single “Haunted House.” It uses a pop trope, the party song against parties. But, it’s delightfully unhinged and invigorates the tired concept. The idea of a haunted house is demonstrated in the demented melody and performance Sir Babygirl inhabits. Forcing one to say, “this is a downright awful party, but I want to dance to this song.”

“Heels” is more restrained than that “Haunted House,” but it doesn’t feel like a let-down. Instead, the song features Sir Babygirl at their most accessible and vulnerable.

There is a genuine pain in Hogue’s vocal performance, but it’s tempered with a dash of hope. “Lights shine brighter when there’s tears in your eyes” sits in the middle of the chorus and serves as the illuminating lyric. Sir Babygirl speaks to struggle, yet finds the happiness inside it. Every bad experience will lead to a good one. And good experiences will lead to better ones.

“Heels” is only the beginning of Sir Babygirl’s album, but joy is simply unleashed in this song. Sir Babygirl is an artist who truly lets emotion show and burst forth. The song is an explosion of hooks and bravado.

“Heels” has been stuck on repeat in my world for a full week. I’ve forced friends to listen to it at parties. I texted it to another friend saying, “You’ll either love this or hate this” (she loved it). I made my brother listen to it in the car (he called it “fun and weird”). And finally, I subjected it to all you readers. I hope the joy of the song makes its way to you, riding the hard beat and piercing vocals straight to you.

Sir Babygirl is an up and coming indie powerhouse, and I think a future album could be a big breakthrough. For now though, I will continue listening to “Heels” over and over until I wear it out. Then, I’ll probably move onto the next song.

Listen to if you like: Charli XCX, Frankie Cosmos, Avril Lavigne, or Mitski.

This is part of the column Song Obsession (formerly Song of the Week).

Sir Babygirl’s debut album Crush on Me is out on Father/Daughter Records now.