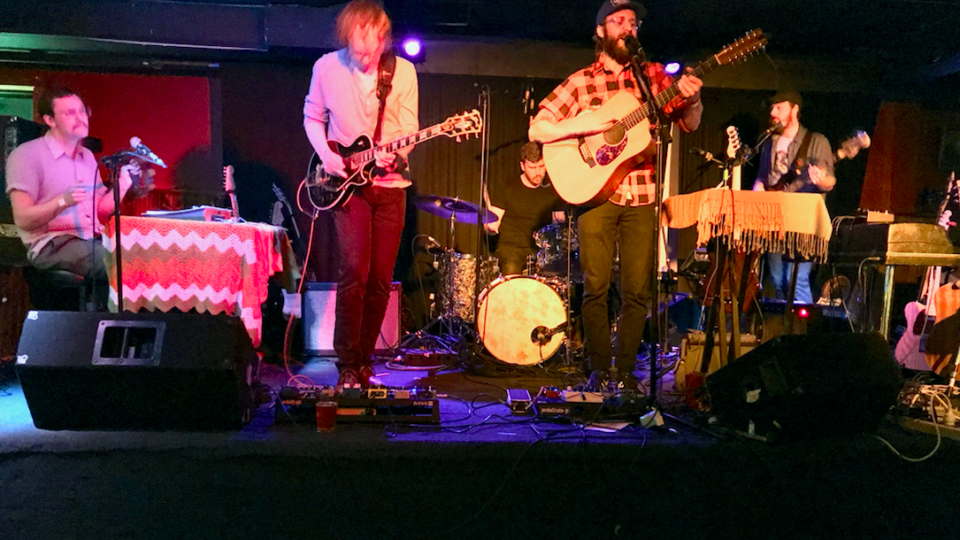 Nils Frahm, a German pianist, composer, and electronic jack of all trades, snatched the collective breath away from a crowd of hundreds at the Englert Theatre nine days ago with a number of cuts from his magisterial new record, “All Melody.”

Speaking about it, but more broadly about his approach and process, he curtly opined “I think we’ll look back and realize that there has never been a point in history where we’ve taken art so seriously.”

The comment puzzled me for ways I couldn’t quite explain, so I pushed it to the back of my mind.

Only a short while spent with the music of Des Moines’ Extravision reveals a blunt reinforcement of Frahm’s belief, that nearly excessive attention to detail is the essence and lifeblood of streams of artists today.

For musicians like Ryan Stier, who fronts the group, it isn’t so much a choice as a requirement; an obligation to explore ideas all the way down to their most refined core.

The shadowy aesthetic of The Mill in Iowa City, in pairing with a crowd embracing the musical lovefest that is Mission Creek, refracted their acute awareness through a magnifying glass of accepting arms and ears.

A debut album title like “Waking Up”, released this February, does little to dispel the notion that Extravision is anything other than a serious band for serious times, whose musical ethos seeks awareness and understanding far beyond the surface level.

Their method of delivery, however, is far less consistent. Friday night’s show saw flirtations with a range of genres, sometimes even within the same song; opener “Still, Up in The Clouds”, floated majestically on the back of textured Stratocaster drenched in reverb and tremolo, in the same vein as Chicago shoegazers, Airiel.

The climax boasted equal fluidity and control as the five-piece climbed together, kickstarting a set as polished and well-composed as it was emotionally affecting.

In contrast to the initial extended jams, which felt buoyant and atmospheric around enveloping delay effects, Stier’s 12-string guitar strummings turned inward on the band’s collective meditations, which touched on mortality (“Moments of Clarity”), purpose, loss, and transition over the course of forty short minutes.

The shimmering sounds of the steel strings held up beautifully alongside guitar leads of increasing intensity and drive, and the occasional punch of overdrive or phaser.

In either case, whether raucous or subdued, balance is fully realized with keys, bass, and rhythm that refused to be overbearing, but rather an accessory to Stier’s psychedelic creations.

On “The Dark Where I Could Only Hear”, a true manifestation of the band’s sonic identity, acoustic textures were smartly woven with jabs of electric guitar touching higher octaves.

Combined with an expressively coherent vocal delivery that aptly filled narrow gaps in the arrangement, it was hard not to be reminded of fellow-Iowan Dick Prall’s voice but washed over with a backing of modulated effects and decay.

The full-blown instrumental push over multiple minutes was carried out with reckless abandon, at least as much as could be mustered for a group with such care and focus. Few groups warrant as direct a comparison to Philadelphia rockers The War on Drugs, and the drone squeezed out in the final seconds of the track confirmed why.

For as unabashedly as Extravision resides in the vapor trail of post-Woodstock Americana and psychedelia, make no mistake- they aren’t ripping anybody off. Stier’s pensive songwriting and honest delivery boast uniqueness that can only be fully understood in front of one’s own eyes.

Led by curious minds and ears, and a clear sense of direction, whatever this group is searching for, I’d bet that they’ll find it.