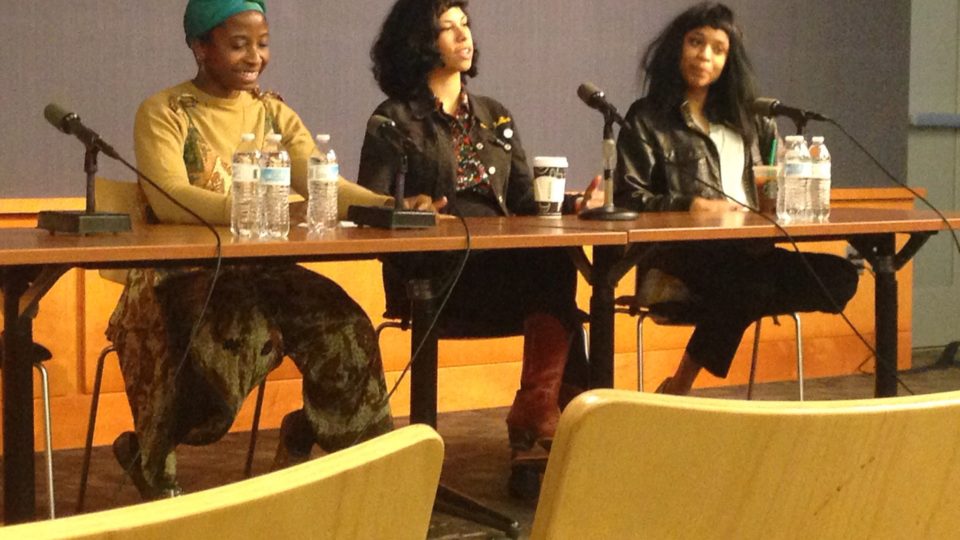 Black Art / White Space Pt. II is a continuation of a panel that began during the Witching Hour Festival in November, where black artists can discuss the various aspects of their experiences creating art in a mostly white space. Alea Adigweme, a panel member at the first segment, asked artists Adia Victoria and Monica Martin about their motivation behind their art, how they navigate blackness in the music industry, and the meaning of success.

Adia Victoria, who performed at The Yacht Club on Wednesday night, was born and raised in South Carolina and discussed the effects of growing up around white people. She explained that she creates art to “fight against the narrative pushed on me” and how she used to associated blackness with only shame. Growing up around white kids led her to constantly compare herself to them, which created a “deficit” in her mind.

She explained that after realizing this in her 20’s, she has spent a lot of time “unpacking my internalized racism” which is an issue that many people of color share when they grow up with the indoctrination of Eurocentric ideas.

Victoria describes her feelings about blackness now to be “a liberation” from her previous ideas. She hesitantly confessed to a crowd of mostly nonwhite people that she “feels blessed” she wasn’t born white, because of the vantage point that has helped her to understand the world better.

After her answer, the audience looked back at Martin, lead singer of PHOX, whose eyes brimmed with tears. Adigweme asked her about her feelings, and Martin disclosed an important moment in the decolonization process: “I feel behind in many ways.” She elaborated, saying that because she hadn’t critically examined her blackness the way that Victoria has, she feels that it’s not her place to comment on black experiences until she has “thoroughly educated” herself.

This represents a feeling that I have definitely experienced, earlier in the learning process. I felt like my friends had so much more knowledge than me, and they had read theoretical arguments and feminist literature that I hadn’t heard of, and I invalidated my own position as a brown woman living in a white space.

However, Adigweme responded with my exact thoughts. “It is your place, though.” As a black woman living in America, as a musician creating art in a white space–her experiences are just as valid and she deserves a voice.

The panel continued, as Martin brought up issues of colorism in the black community. Victoria spoke against the limiting definitions of blackness. Both artists discussed their frustrations with wanting to create art meaningful to them, but the white music industry expecting them to make pandering music that appealed to “the NPR crowd” (otherwise known as white hipsters).

Victoria explained how she has learned to deal with those people: learning to say no. When people try to change her creative process or her political activism, or tell her she isolates herself by creating a certain kind of art, she reminds them, “you work for me.” She finished her answer by defiantly declaring “I’m not going to take a position of subservience in my art.”

Black Art/White Space Pt. II was the most powerful Mission Creek event I have attended so far, and I applaud the organizers for including this in the festival.

Check out my review of Adia Victoria’s show here, and PHOX’s show here!