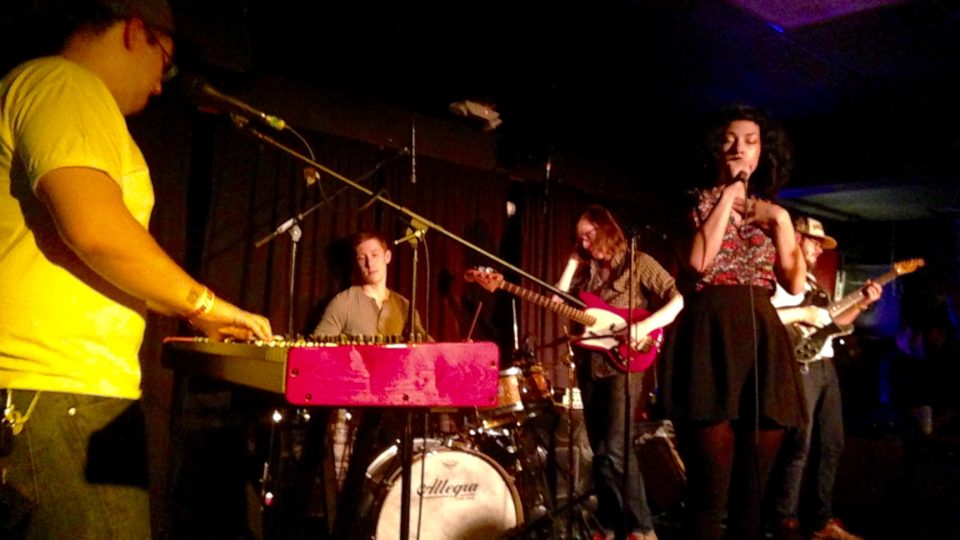 Wisconsin folk/indie band PHOX graced Iowa City’s Mission Creek Festival at The Mill on Thursday, April 7th. After they cancelled their Witching Hour performance due to illness, the crowd was anxious to hear the band play their unique music. Mixing the sounds of Bon Iver and Nickel Creek, the band has played at Bonnaroo, Coachella, and now, Mission Creek!

The show began with openers Subatlantic and The Wandering Bears, but I already felt impatient about seeing PHOX

which probably affected my opinions of the first two bands. The first group, Subatlantic, composed of older members, began with their set, which I found to be pretty homogenous. Each song sounded similar to the previous one: a cliche mix of folk/indie with some aspects of country sprinkled in. They had longer, awkward breaks in between each song during which they definitely lost my attention.

However, I really loved the variety of instruments they used, like a cello and an accordion! They competed for my attention with the drunk people yelling next to me and lost most of the time.

I appreciated that members from PHOX and The Wandering Bears both showed up to watch the first performance, which headliners often don’t do.

While the first band seemed to be largely unknown, The Wandering Bears definitely had a fan base. After a 5-year hiatus, the band appeared to be surprised that some audience members knew every word to many of their songs and even the names of the members!

I liked this band’s style more than the previous opener, mainly because of the three vocalists. Each of them shared the vocals pretty equally and clearly had individual talent, but blended together so well. Their three-part harmonies transitioned from complex to unison with ease, and they sounded so smooth. Unfortunately, I found myself ignoring the rest of the band’s instrumentalists because I was so impressed by the vocals. During the last song, one of the two women precariously crowd-surfed (such is the nature of crowd-surfing) and they left the stage.

Finally, PHOX began to set up for their long-awaited performance. The lead singer, Monica Martin had participated in a panel earlier that day called Black Art / White Space to discuss her perspective as a racialized woman creating art in a mostly white arena, and the event was very powerful. I was excited to see a different aspect to her persona as an artist.

Aside from Martin, the band members looked like really cute nerds. Thick-framed glasses, matching tattoos, and an energetic stage persona contributed to their lovable nerdy nature. A few minutes before they began to play, the band squeezed past me yelling “we’re gonna pee first!” Thinking ahead. Smart people.

They began with the song “Calico Man,” and the audience immediately quieted down to listen to Martin’s flawless voice. The people next to me repeated “she’s got the voice of an angel” all night, and I agree! When she sang “Blue and White,” I may or may not have shed multiple tears.

The band played four new songs which showcased a starkly different style than their older music. Their first new piece, entitled “Lack of You” discussed the dilemma of being hit on by a person who is in a relationship. The song seemed to stray into R&B genres, with hints of jazz-iness. Their newer style reminds me a lot of Allen Stone: relaxed R&B sounds with smooth vocals.

Other new songs included “Fight or Flight,” “Stocked Liquor Cabinet,” and “Pillow Case” and the crowd seemed to love all of them. I can’t wait to hear their newest creations!

The night was complete when Monica Martin looked directly at me and recognized me from an earlier event. SHE WINKED. I died. It was amazing.

PHOX’s performance tops all other concerts I’ve ever attended! Stay updated on the band to listen to their newest music!

Check out the PHOX Facebook page for band updates and silly selfies, and listen to some of their great music here!