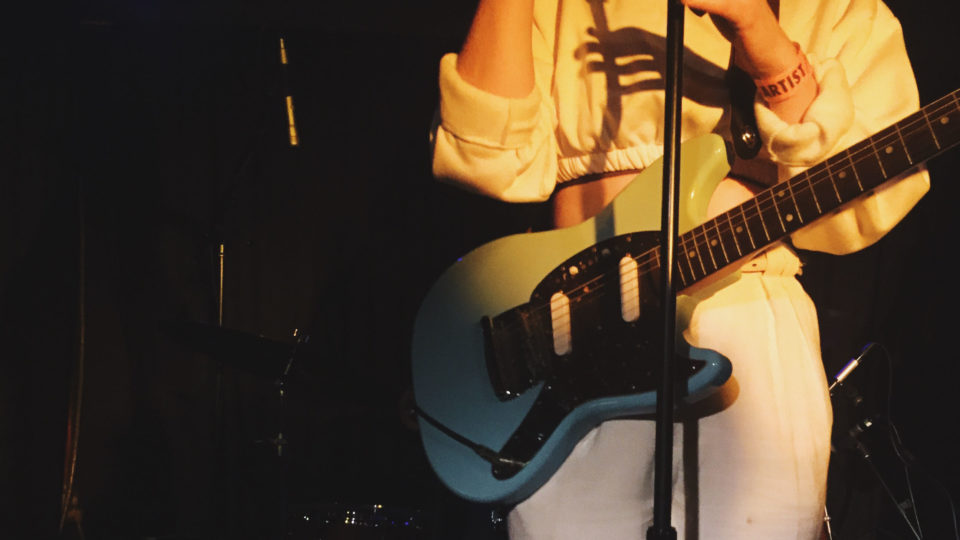 *Disclaimer: This article includes language that may be deemed unsuitable for minors*

The first day of Mission Creek Festival is finally here! The next five days will be filled with concerts, lectures, literary events, etc. all around Iowa City. The Mill kicked off their series of Mission Creek concerts with Caroline Smith, joined by openers Karen Meat and Quilt. Doors opened at seven, and the festivities began.

When I got to the Mill fifteen minutes before doors opened, there was only a very nice middle-aged couple before me that were there to see Quilt. When we got inside, they grabbed the booth closest to the stage and invited me to sit with them since they had no one else coming. For the remainder of the hour waiting for the first opener, Karen Meat, we talked about music and about what we knew of the bands performing. The rest of the audience seemed to be college-aged/twenty-somethings with a few older people scattered around.  The restaurant and bar held around 30-40 people at this point, and it was pretty quiet. (Tip: If you ever go to the Mill, for a concert or otherwise, order their coffee. It was unexpectedly very good.)

When Karen Meat took the stage at eight, the only thing I knew about them is that they were from Des Moines. Within the first thirty seconds, it was easy to tell that the band had chemistry. They were goofy in the way that they played and collaborated with each other’s energy, but I noticed that it took them a few songs to really get into their music and performance. They reminded me a lot of the sound that The Frights have (which I’ve started to get more into recently), but Karen Meat had cooler lyrics, a unique female voice, and more electronic elements. Those electronic aspects of the music were translated really well live. One of the musicians had some kind of digital, touch screen guitar that was used to make synth elements come alive on stage.

You can definitely tell that the group genuinely has fun performing together, and as their set continued, they drew people onto the floor in front of them to have fun as well. They laughed on stage as they silently shared inside jokes with each other, and they then gave that joy to the audience as well. I probably would not continue to listen to this band’s music if the performance hadn’t gotten so entertaining. If Karen Meat is playing anywhere near you (here’s their website), I would highly recommend going and seeing them.

Next up was Quilt at nine, and I was instantly interested in their sound because of the members of the band themselves. Each member had A+ fashion sense, and each seemed to hold their own stories and their own secrets. I was excited to see how those personalities would transfer over to their music. The transition from the tuning at the very beginning of the set and the first song was super interesting. It was like they were trying to draw you in just from the sound of their instruments and then turned that fiddling into a song. Those transitions between songs continued throughout the entire set. I don’t think there was any point in the set where an instrument wasn’t being played.

Quilt was clearly very well-rehearsed. When the tempos in their songs changed immediately from slow to fast, there wasn’t a flaw in the beat of the music. That is something that can be really hard to accomplish (or at least it was in high school orchestra). Their vocal harmonies were absolutely perfect. For the first half of the set, I thought that they were using a synthesizer for the second or third harmonies, but found out that they were all happening live.

The band had several exchanges with the audience that made the connection between musician and viewer seem more real. Once, the guy standing next to me yelled to the band after they said this was their first time in Iowa City. He shouted, “The weather doesn’t make sense, but you guys rock!” The lead singer then replied, “The weather doesn’t make sense? Why, because it’s April and it’s cold as fuck outside?” It was a small exchange, but everyone laughed. Those interactions can make a huge difference in the quality of a concert experience. Overall, I don’t know if I would continue listening to the band’s music because it isn’t perfect for my taste, but their set was well worth attending.

It was finally the time that everyone had been waiting for: Caroline Smith, the headliner of the show. From the time that Quilt’s set ended and Caroline got on stage, the floor had filled up so much that I was pushed from further back to the very front of the stage, right in the middle. (I’m not complaining.)

As the stage was being set up, the band’s chemistry and love for each other and what they were doing was evident. They were laughing together, talking and telling stories, and they were excited to get started. Caroline Smith had this light to her immediately. When she got on stage, she went straight to the microphone and started the set with the most powerful pose and the nicest smile. Her voice sounded exactly like it does on her album; it has the same jazz and R&B feel to it. Her backup singer had the exact same level of talent as well. A few songs in, she told the audience “I promise to give you everything I’ve got tonight if you promise that you’re going to feel good.” The entire band had such a life to them along with so much pure enthusiasm, and they truly wanted everyone that was there to have the time of their life. Their cover of Alanis Morissette’s You Oughta Know also didn’t harm anything. (Early 2000’s me was screaming.)

What made the performance so meaningful was that, as a human being, Caroline Smith was so strong. It exuded from her and her music so openly. During the performance, she kept talking about gender equality in ways relevant to her music, and she kept making sure that everyone knew that they should be happy, during the concert and for the rest of their lives. When she sang her second to last song, Walking Off Strong, she handed her mic to different people so that they could sing along with her. As she handed that mic to me and let me sing part of the song that she wrote, it was the most empowering thing that I’ve experienced in a long time. I know that everyone else in that room could feel that confidence that Caroline had and could feel it in themselves.

Let’s just say that I’ve heard the phrase “post concert depression” multiple times in my life, but have never understood or felt it until I attended this concert. There was amazing music, amazing people, and an amazing vibe flowing through everyone that was there. I will think about last night for a long time, and I know that the other amazing performances during Mission Creek will have the same amount of passion in them.

Listen to Caroline Simon’s album below: