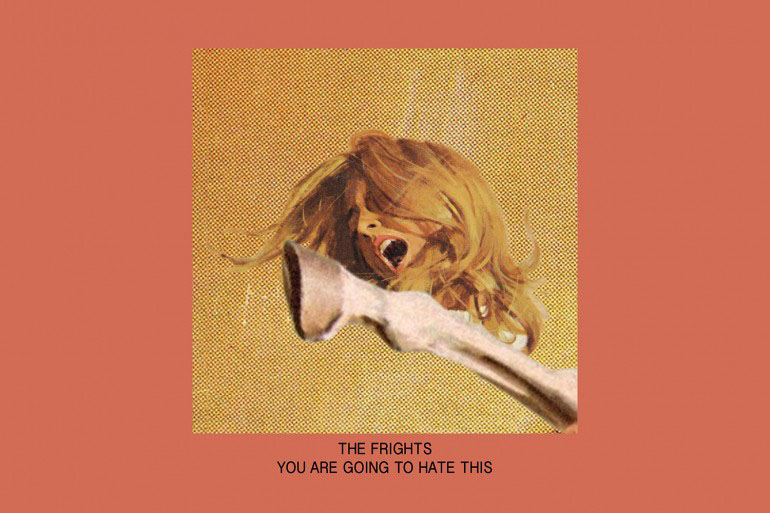 *Disclaimer: This article includes content that may be deemed unsuitable for minors*

The Frights, a surf punk band originating from San Diego, California, released their second studio album, “You Are Going to Hate This” in February of 2016. The trio began playing in a garage in 2012 before they all separated for college, then regrouped later on to create a new sound, which they coined “dirty doo-wop.” The dirty doo-wop sound is especially prominent in their first studio album, and is still relatively recognizable in their second. “You Are Going to Hate This” is somehow similar to Mac Demarco, The Strokes, and Boston all at once, and each song is variant, with its own individual sound.

The opening song, “All I Need” gives a good feel for what the rest of the album will be like. The vocal, guitar, bass, and drums are used in a multitude in ways throughout the song that will all be used later in the album. It also introduces the angst-y lyrics The Frights wrote for the album.

“Kids” feels like the definitive teen angst anthem of the album with lyrics such as “I hate my mom and dad,” and the scream of “oh my god whatever,” in the middle of the song. The studio recording of this song gives off an outdoor concert vibe, especially in the way that the voice sounds.

The next song, “Afraid of the Dark,” provides a calmer break in the album, and brings the listener back to the chorus of the first track. The song is soft, but features heavier vocals, a steady drum beat, and a quick and simple guitar riff.

“Puppy Knuckles” brings a petty middle school romance into a grungy rock song. The lyrics put it simply enough, but the music itself sounds so cool that I don’t feel like I’m reading a letter passed between two twelve-year-olds during math class. I especially like the music box sounds between the chorus and the second verse, which I think ties back to the immaturity of the story taking place.

The fifth song, “Tungs,” explains the band’s surf-rock sound from the very first second. The song is a lot less gritty than the previous songs have been, but still fills the rock standard that the album holds. I like that somehow we can tell how much the singer cares about the love interest with the lyrics “Have you seen my shoes? Cause they’ve been ripped to shit from walking the world for you.” The transition between this song and the next, “Haunted,” is executed very well.

“Haunted” is a distant, spacier, more robotic song, and is my personal favorite on the album. The strong electric guitar and drums suddenly disappear for the beginning of the song. Eventually, a cello urges a string orchestra into the picture, which is a no-fail way to make me fall in love with a song. I could see this song being played in some kind of underground hangout in a big city.

And then “You or Me” appears, and you are immediately woken up from your stupor. Everything that we got at the begging half of the album is back again and packed into a single song. At this point in the album, I think this sound is used enough already. I liked the different direction that the last two songs, “Puppy Knuckles” and “Tungs” were going and wanted to hear more of it. That being said, the song still fits in.

“Growing Up” made me think differently about how the musicians were using different sounds as symbols. The song is clearly about an on-again-off-again relationship (which is easy to interpret via the lyrics). I think that this song is particularly interesting because during the verses of the songs, the singer and the instruments are acting as they normally do.

Suddenly, when the chorus begins, it sounds like the voice transforms into a machine breaking down. The song itself creates a “machine” or relationship that goes between working as usual, and breaking down, like the relationship being described in the lyrics. Eventually, however, the alternation between the two gets boring and the song seems to be dragged out for too long.

This song ended up making me wonder if the entire album was a concept album, since the singer is telling (I’m assuming) the same girl the hard truth about how he doesn’t like her, and how he knows that she will hate what he has to say, circling back to the title of the song and album. I think that it could be a concept album, but it’s a very far stretch.

“Of Age,” the final song from the album, is a simple, cute outro featuring a ukulele and some light xylophone in the beginning, but transforming into a slightly rougher song near the middle. After analyzing the lyrics, I quickly realized that this song is a “screw you, but I’m still going to miss you” song so the singer can tell the girl that he really doesn’t actually want to be with her and never will be again. The song reminded me of the song “Postcards from Italy” by Beirut, despite the two bands being on opposite ends of my music taste.

I think that “You Are Going to Hate This” was overall a good listening experience, but only if I don’t feel like listening to anything with any real substance to it. The lyricism could have been much better and the album feels like it could have been cut in half and still hold the same amount of entertainment. I could play this in the background while I am doing homework or reading or walking to class, but not if I want to sit down and listen to something.

Listen to “You Are Going To Hate This” below.

One response to “Album Review: “You Are Going to Hate This” by The Frights”