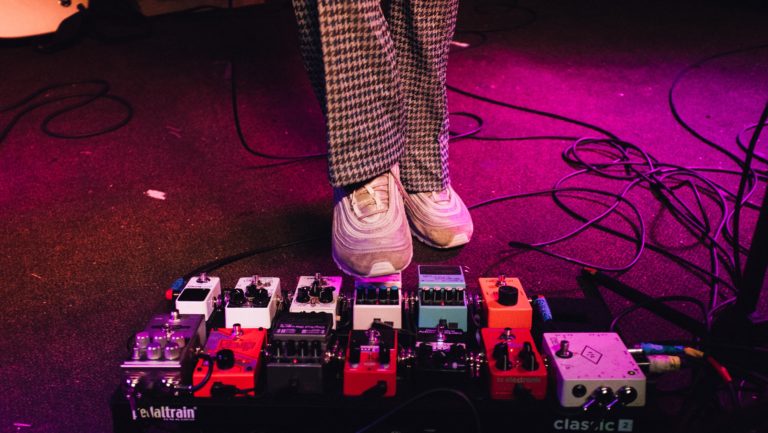 I had been at Gabe’s for a couple hours watching Karen Meat and Younger, Beach Fossils’ two openers, and had watched the gigantic room upstairs fill for them the whole time. I’d listened to one of their alt-rocky tunes before, “Sleep Apnea”, so when I heard that a band named Beach Fossils was coming to Iowa City for Witching Hour Festival the name rang a bell.

The audience awaiting the band’s arrival was very eclectic. Most of the people that were there for Karen Meat had stayed for the whole evening with the intention of seeing Beach Fossils as well, even if their sounds are very different.

There were also a lot of people showing up that were older than the audience for the previous two bands but not by too much. They could have been in their late 20’s or early 30’s.

As soon as the band begins playing, I can see why. This is the kind of music I love, that provides a special kind of comfort, kind of like a nostalgia but for a time you can’t pinpoint. The echoey, drawn out notes on an electric guitar that seem like they might fly.

The vocals slick over the subtle beat of a drum. The sound is timeless, something lasting. I could see anybody listening to Beach Fossils, since their music is clearly about the feeling a person gets while listening to it.

I wish that the band had interacted with each other more or had been less formal, for lack of a better term. Their music was amazing, and it’s important to focus on making music sound great in live performances.

It still would have been nice to create a dialogue with the audience or with each other to make the experience a little bit more accessible.

They did say that they were inspired by a trip to Jimmy John’s to write a song about their trip to Iowa.

I don’t know what it was, but something about the experience was off.

I loved the music, I loved the band, but something kept me disconnected from the amazing feeling of being at a concert and seeing the music you love laid out in front of you.

I did, however and thankfully, find a new band I would love to listen to constantly. I’m glad to hear that on their recorded albums there are string influences! You can hear cellos in there!

A band that can appreciate classical music even in it’s tiniest forms automatically owns my heart. They create ideal road trip music, or at least music that makes you feel like you’re going somewhere.