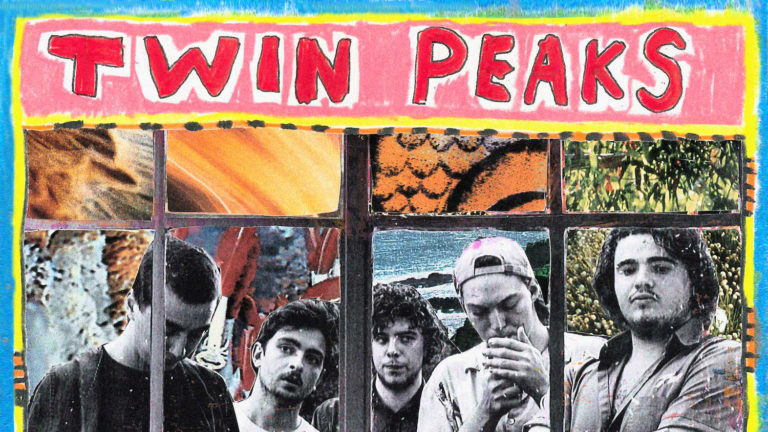 Twin Peaks released their third album “Down in Heaven” on May 13th, 2016. The band formed in 2010 when they were still in high school, and have been producing their self-titled 60’s garage rock/2010’s garage punk sound. They’ve released three albums, and say they are influenced by Black Lips, The Pixies, The Smith Westerns, and White Mystery.

Before listening to their most recent album, I listened to the previous two. “Sunken,” released in 2013, definitely held more surf rock than 60’s garage rock, but was I incredibly satisfied. All of the songs melted together in the best way possible but were still different, exemplifying the various talents of the band members. I was reminded of an odd combination of bands, from The Human League to Novo Amor to (very briefly) Ozzy Osbourne in this album.

In the second of Twin Peaks’ studio albums, “Wild Onion,” I began to see the band sink into the rock vibe, but kept the surf rock as an essential element. I felt more like I was listening to a friend’s album than a stranger’s. It felt a lot more like I had a reason to listen to it, and that came with the rock. The new vocal variety was a good way to keep the songs separate yet together. “Making Breakfast” earned a special gold star from me.

Listening to these first two albums gave me some hope for what I would get from “Down in Heaven.” I wasn’t noticing too much lyrical genius, so I was hoping to get more of that. I also hoped that I would still feel like I was listening to a group of friends doing what they loved to do. I hoped to feel engaged, yet comfortable. Having these hopes in mind, I clicked play.

“Walk to the One You Love” sounded like a driving song, but wasn’t at all what I was planning on hearing. The lyrics were repetitive, which kind of made it drag on a bit. I don’t really know what to think of it, but I’m not sure that it was for me.

For some reason, “Wanted You” just made me think of Mike Posner’s “Bow Chicka Wow Wow” as soon as it hit a break from the vocals. I think that it was in the guitar because there is no similarity between the two artists or songs. I did enjoy the subtle harmonies that were joined by two voices near the last third of the song because they gave the song depth that it hadn’t had up until that point. There were layers to the tune, which, in my opinion, is vital.

“My Boys,” however, did not hold the same amount of depth. The message of the song is essentially “I’m in a car with my friends, and we’re all blazed.” I may or may not let this slide if the artists had found some way to convey the message that wasn’t with the lyrics “90 miles down the f*ckin road and I’m stoned, my boys.” At this point, I’m counting on sticking with their first two albums.

“Butterfly” is a song about loneliness. The song touches on loneliness based on being left by people that were supposed to love/care, such as friends, parents, and possibly a significant other. The singer also talks about how, despite the pain of being left, he is leaving others as well. These things can be relatable to me and to others. I also really liked the music itself, especially the guitar.

Ah, yes, the signature “I couldn’t care less” song that comes with any alt-rock/indie album. “You Don’t” features the lyrics “I wanna be bored of you if you’re bored of me,” which is I suppose kind of cute (if it wasn’t for the fact that being with someone who is bored while also simultaneously being bored is incredibly boring–and probably not very healthy). He also sings, “if you don’t care about a goddamn thing, then I don’t,” which contradicts the entire point of this love song. He does care, despite his love interest’s disinterest. I don’t know what to think, but I really didn’t find my hope of lyrical genius in this song.

“Cold Lips” is a reality check via a string of sick burns. If you read the lyrics, some of the things that he’s saying to this person are pretty intense. I wish that I had more to say about how I feel about the song, but mostly I just want more back story about who the singer is trying to send a message to.

I am relieved to hear the intro to “Heavenly Showers” because I can tell that the song is going to be different from anything I’d heard yet on the album. The other songs are exhaustively similar, but this song sticks out a bit more to me. There are two voices that work together. One of the voices is calm and steady, while the other is raspier and almost angry. This could be symbolic of an internal struggle. The voices sing, “Now I don’t feel too sad, you know, but I could.” This makes me think that perhaps the song is about denial of one’s feelings. I feel like I can finally listen to what the band members are actually thinking without the show of it all, which is good to hear sometimes.

“Keep It Together” made me think for a while. The lyrics refer to a “her,” and I was curious to figure out who she was; she didn’t seem to be a person, necessarily. The singer seemed to be fascinated with her. It took a couple of listens, but I came to the conclusion that this is a love song between a drug and its user. If this is the case and the song isn’t just about a girl, I really enjoyed it.

And then suddenly, the members of Twin Peaks turn into mentors within a short, sweet song. “Getting Better” is, as you might expect, a song about recovery and urging someone to recover. The band gives this musical advice in exactly the way that I like my advice: more of an understanding rather than an order. This shows me that the band cares enough about their fans to give them a genuine, encouraging song.

The title of “Holding Roses” immediately made me think “cheesy love/breakup song,” and I was only partially correct. I was confused by the happy music when I was expecting a more somber sound. The mood made more sense with the first lyric we hear: “save me from a sad, sad song.” The lyrics from then on made sense. This guy is heartbroken that he lost his love, but it deciding to be okay with it. It was unique in that contradiction, and I find it interesting. Way to go, dude.

“Lolisa” is basically a song that Pudge may have written for Alaska. The entire thing revolves around how special and unique this one girl is. She is grungy and sad and wears different clothes, but she is so, so beautiful anyways. I would ordinarily love this song, but I can’t help feeling that writing/singing about this type of girl is overdone.

“Stain” sounds to me like a song about a broken childhood and trying to grow up in spite of it. The singer finds stains from his childhood in places he finds in his adult life: airplanes, polyester coats, and in his mind. This song speaks volumes to me, and I’m sure that it speaks volumes to many others that have heard it.

Finally, at the end of the album, we reach “Have You Ever?” I wish that this had been a better send-off, but I mostly notice how repetitive the song is. One of my pet peeves when regarding music is too much repetition within a short amount of time. That being said, this song didn’t really sit too well with me. It did, however, fit in with the rest of the album since the music was pretty much the same/very similar.

After this album was released, the band did a live Spotify Session that just happens to have some pretty cool album art (see above). Only two of the fourteen songs released were from this album: “Walk to the One You Love” and “Butterfly.” I personally thought that they were both more impressive live because it was easier to tell that the band members were doing what they loved. My favorite song by the band, “Making Breakfast,” was also on the live release, and they made it sound even better than they already had. I like the raw sound they have when they perform live.

Listen to “Down In Heaven” below.