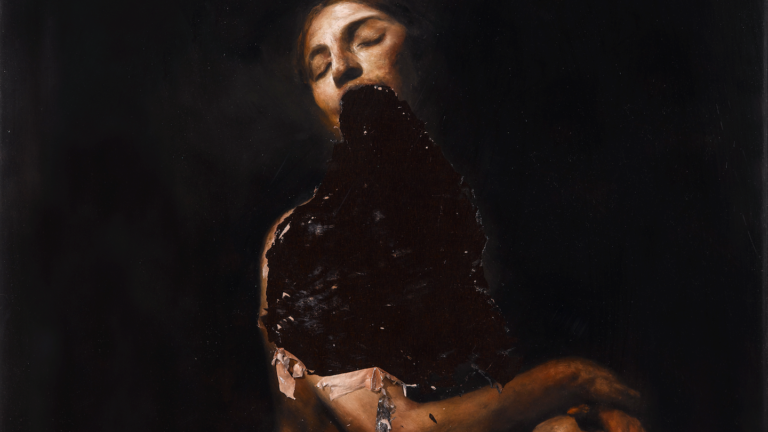 The Veils, an indie-alternative band from London, have released their newest album Total Depravity. The band has released two EPs and four albums before Total Depravity. I personally have never heard any of the Veils music before, but was drawn in by beautiful and haunting album art of their newest album. The only place I had luck finding lyrics is the band’s website, so all lyrics I discuss will be on this page.

The first track on the album, “Axolotl” is intriguing to me. I love the emotion and chaos that the instruments bring to the song, and I think the vocals fit them perfectly. I was curious as to what “axolotl” meant and upon a Wikipedia search discovered that an axolotl is a Mexican salamander known as a walkingfish, none of which are still surviving in the wild. They are unusual because they mature into adulthood without undergoing metamorphosis like other amphibians. I wondered if this had anything to do with the song’s meaning.

This track is the only one on the album to have a music video released, and it confuses me in terms of lyrical meaning. I find the music video to be disturbing in a fascinating way, but it took me in a completely different direction than I thought it would. It features a man with a clear abnormality, which includes black sludge pouring out of his stomach and his mouth. This motif ties in with the album art, a portrait of a woman with what looks like oil paint pouring out of her mouth. Watch this music video below.

“A Bit on the Side” reminds me of another band that I cannot for the life of me remember. I think I hear something very familiar in the vocals because the music itself is very understated until there is no one singing. I do wish that the music wasn’t so repetitive. I think it sounds good in between verses and the chorus, but it can get a bit exhausting to listen to over and over again. I hope that the band isn’t as repetitive throughout the rest of the album. That being said, the first lyrics of this song is “hoochie-coo-mon-ami-oh-my, honey, honey” which is very satisfying to say so I’m into that.

“Low Lays the Devil” is a very AM-era Arctic-Monkeyian song. I can’t stop focusing on the guitar in this song, some of the riffs are beautiful. I don’t care too much for the lyrics, but I love “sure as inside the egg lies the yolk, I’m standing outside the gates of Hell, and I’ll keep singing ’til I croak.”

You can definitely tell that the band is trying to directly tell something to the listener in “King of Chrome.” The vocals are much stronger than any other part of this song. The voice sounds a lot like it did in “Axolotl,” so it is possible that the artists were trying to make us draw a connection between the two tunes. They were the two songs that represented the same types of things: a man that is lonely, and man that is turning into a monster, a man that can’t find anyone else that is like him, a man that seems very angry for reasons we can’t really see based on lyrics alone.

“Swimming with the Crocodiles” is my favorite song on Total Depravity so far. It makes me want to drive and it makes me feel very nostalgic. I think that nostalgia stems from the guitar’s crooning, which was a common motif in music my dad used to listen to as we were on road trips when I was young. This song’s lyrics are also very beautiful, but I wonder what the crocodiles really are. It would make sense for them to be harsh memories or people from the past. I could also see that the water represents the comfort that can come from dwelling in something, sad or otherwise.

“Here Come the Dead” is the most sudden contrast to the previous (very calming) song. The song starts very vacant with pregnant pauses in between lyrics, then starts with very harsh guitar. Throughout the song, the music goes from calm to harsh to relaxed to sudden, a back and forth pattern. I am not sure how I feel at all about this song, but I’m kind of put off because a few of the subtle sounds in the background vaguely remind me of Jellyfish Jam from Spongebob which is so not anywhere near relevant to this album and very unfortunate for The Veils.

“In the Blood” was a good way to calm the listener down after listening to “Here Come the Dead.” I loved the opening lyric “he holds your nightmares in one hand and your dreams in the other, but no matter which one you demand you’ll wish you would’ve chose the other.” It was a simple lyric with a simple voice and a simple melody in the background, which was great to calm my nerves after the whole “this song is creeping me out but also reminds me of Spongebob??” fiasco.

In “Iodine & Iron,” my favorite part of any album is featured. If you’ve read any of my other album reviews, you know how much my heart sings for a string element. There was a subtle orchestra in the beginning, and there were cello harmonics in the middle, and there was a lone violin in there, and the orchestra returned and I’m just very happy with it. The song as a whole had a lot more country elements than I would have preferred in the music, but I think that The Veils had a great balance between the different instruments and the vocals that I’m not really that upset about it.

I wish that there had been more diversity between “Iodine & Iron” and the next track, “House of Spirits.” The music is very similar, but the latter is a lot less country-esque sounding. I love the rhythm and the chill-ness of this song, but there really isn’t too much else to say about it. I feel like it fits in, but that’s all.

“In the Nightfall” is second to “Swimming with the Crocodiles” as my favorite tune from Total Depravity. I do like the extremely relaxing nature of the song, but I like even more that it seems to tie in with “King of Chrome.” This song opens with the lyric “I stepped out to the sound of my radio on the right song.” It made me wonder if this entire time during the entire album, the trucker was telling his story through the radio he was listening to.

It would explain why there were so many drastic changes in the style of the songs; perhaps he was flipping through the radio stations. Sometimes there were songs next to each other that sounded similar, so perhaps that’s when he decided to stick with a radio station for a few songs. We can see him step into this truck at the beginning of the album during “King of Chrome,” and step out of his truck now after thinking for a while, during “In the Nightfall.”

The last song, “Total Depravity” seems like the perfect song to play during the credits if the rest of the album were a movie. The lyrics recap the story in some subtle ways, but the music itself serves as a great outro to the story. It feels like a sendoff, which is what I feel the truck driver/man looking for common ground really needs.

The album seems to be a tale or commentary on corruption either of an individual or of a group of people, but also of how it is possible to get out of it. In the “Axolotl” music video, first a man has black sludge dripping from his mouth until eventually all of the people around him also do. Perhaps it is about a man who is or thinks he is corrupting the people around him. Whatever the meaning, I will probably be listening to this album in the future, and have found a few new groovy tunes that I love.

You can listen to the album on YouTube here, or on Spotify below.