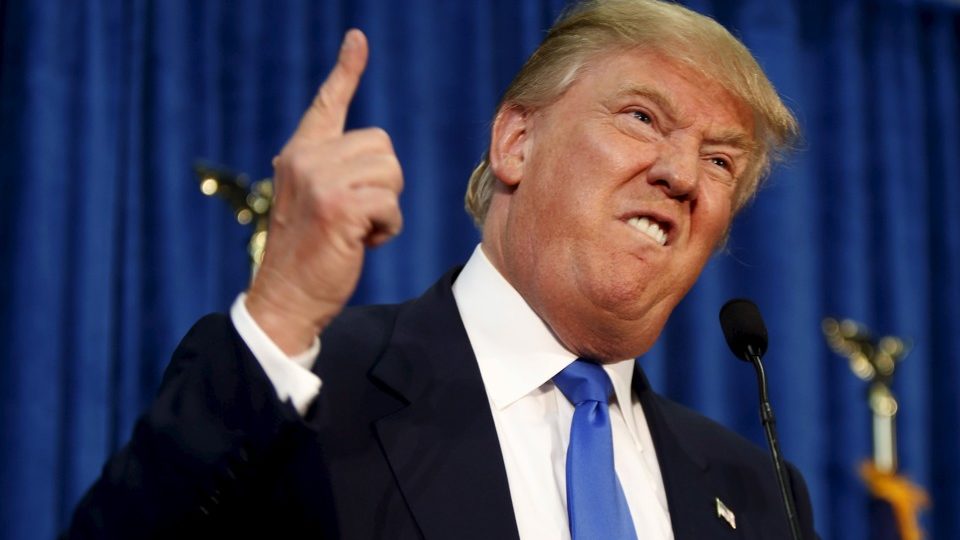 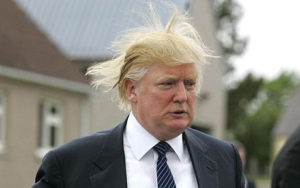 Disclaimer: The views expressed in this piece are those of the writer, not KRUI.

“They’re bringing drugs, they’re bringing crime. They’re rapists and some, I assume, are good people.” These words were used to describe an entire ethnicity. They weren’t spoken by some random person on the street, they were spoken by someone who wants to be the President of the United States: Donald Trump, a reality TV Show host and a real estate tycoon.

In 15 words, he devalued every single hardworking Mexican. He spoke these words in the speech he used to announce his candidacy. In that same speech, Trump talked about how immigrants have no place here.

However, apparently that’s not important, because his mother’s skin was white. If immigration had shown up on her doorstep, the minute they saw her white face they would apologize and walk away. The lady with a brown face sitting on a bench? They would instantly walk up to her and assume she was illegal.

He says he wants to deport all illegal immigrants from the country. However, not all immigrants: just Mexicans. According to Trump,

Trump only said Mexico, so it’s okay people from Central and South America. You can stay in the United States! You’re not from Mexico!

Right now, Mexico is still trying to get over the national embarrassment of Joaquin “El Chapo” Guzman, the drug lord who escaped from maximum security prison. Again. After his escape, Trump decided to give his opinion. 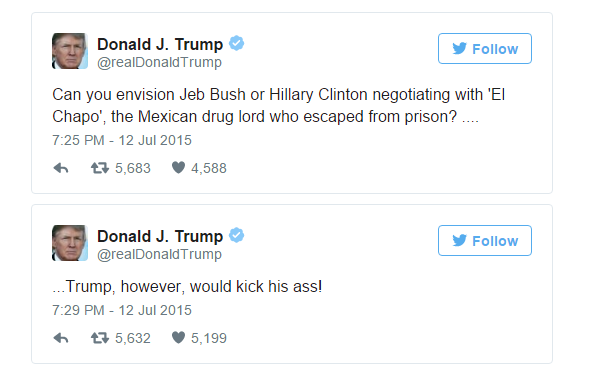 Trump is threatening a man who is feared by an entire country. Very smart. That’s what I want in a president. For him to provoke a drug lord and mass murderer. Trump is right in one thing: Mexico has drugs and drug cartels. It is precisely because of these drug cartels that people flee to the United States. They control Mexico’s government at the local and federal level.

On September 26th 2014, 43 college students were attacked by local police ordered by the local drug cartel. What has Mexico done? They covered it up and are still covering it up. (Geez, I wonder why people are fleeing.)

Ever since his speech in the summer, Trump has gone on to say even more ridiculous stuff. However, his supporters are just like him. Ignorant and aggressive. In fact, a Honduran man went with fellow Latinos to a Trump rally. His experience was captured.

His feelings at the Trump rally are what many immigrants feel in their own home country. Fear. Not only did Trump’s supporters get his home country wrong, one man spit on him because of the color of his skin. Ronald is from Honduras, which is separated from Mexico by an entire country. This man is not Mexican, he is Honduran. But to Trump’s supporters and to Trump this doesn’t matter. He is brown, therefore he is Mexican.

Our parents and our peers come to America not to steal jobs, not to make the economy worse, they come to escape. They are scared of stepping out into their street. They come so they don’t have to feel that emotion anymore.

I put out a study on Facebook and asked my peers to answer three simple questions: What their ethnicity was, the chances of them voting for Trump, and why they would or wouldn’t vote for him. I got 35 responses. Out of the 35 only 9 said they were either Hispanic or Latino. That didn’t surprise me. I was raised with the phrase, “Don’t say or do anything that will get you in trouble. Stay out of it.” The parents of Hispanic/Latino children are raised to avoid trouble, to not stick their neck out. This comes from their own fears of their childhood.

In the survey, 23 people said they were white. When I looked at the stats of their chances of voting for Trump I was definitely surprised.

Eighteen said there was no chance of them voting for Trump. Some of my favorite responses included:

“This country would be a complete joke if Donald Trump became president.”

“Because he is insane and doesn’t actually have a solid plan for the nation and he’s racist and impulsive. He’d jump us into a nuclear holocaust 5 mins after being swore in.”

“Several reasons: 1. He’s racist af. 2. He’s sexist af. 3. He will single handedly burn this country to the ground. 4. Those creepy comments he made about his daughter. 5. I don’t trust his face. He looks like Peter Pettigrew, if Peter Pettigrew had become a billionaire running a rat mafia. 6. I made a vow that if Trump were to become president I was legitimately going to move out of the country and I’m currently a broke college student and I guarantee I will not have my life together enough to move out of Iowa let alone the US by 2016. 7. #Bernie2k16.”

“He’s a racist motherfucker that would ruin literally fucking everything.”

The rest of the reasons that people wrote went along these same lines. Not only do they think that Trump is racist, but they also consider him a joke. Some didn’t even mention his racist comments, they just don’t want him as president.

One Latino wrote, “He’s disrespectful. A leader doesn’t need to offend anyone, more importantly make anyone else seem like less to be a president. A president cares about every human. Doesn’t think of the innocent kids that he also puts down or most importantly, probably even scares. We’re all human. We all deserve respect.” The rest also wrote how they had no respect for him.

One thing that I found more surprising than anything else was that not one single Hispanic or Latino wrote a cuss word when writing their response. Their responses talked about being disrespected and how Trump was rude and condescending.

Going back to what I said before, Hispanics and Latinos are raised to stay out of it, avoid conflict, mind their own business. It is our greatest flaw. We don’t get involved. We don’t push. We keep our heads down, and do what we need to do. And yet we still get discriminated against. The vast majority of us are workers, doctors, teachers, lawyers, actors, singers, and students with no criminal record, but when just one Hispanic or Latino breaks the law, our entire race feels the repercussions. Suddenly, we are all criminals and need to go back from where we came from.

On November 7th, Donald Trump hosted Saturday Night Live. The live comedy show is known for making fun of things that normally wouldn’t be made fun of. While most of their shows laugh at politicians and celebrities and how they act, this one made fun of something else. It made fun of an ethnicity.

Leading up to the show, protesters began popping up. These protesters were Latinos. They weren’t happy that offensive comments made about them were about to be taken as a joke. They were about to be made of fun of on national television. They held up signs that read “Stop the Hate”, “#RacismIsntFunny”, and “#DumpTrump”.  They protested because the show wouldn’t be one rich white man hurling insults. . . It would be an entire cast of rich white people.

Trump’s monologue was the first thing that started off the show after the cold open. In it, he states that he can take a joke, makes fun of Rosie O’Donnell, and says hes rich, full of talent, and handsome.

The Latino protesters had said before the show that they would give $5,000 to anybody that called Trump a racist on the show. They weren’t joking and will give Larry David the money. While everybody considered it a joke, the Latino protesters did not. Trump called Mexicans criminals, but when the Latinos protested against him, they did nothing violent or criminal. They didn’t burn things, destroy things, or vandalize anything. It was a just a group of Latinos asking for respect. Latinos and Hispanics stay out of political issues and other things but when they do decide to stand up for themselves and ask for respect, they are taken as a joke.

This is important because Latinos and Hispanics are never taken seriously and in the words of John Leguizamo, a Colombian-born actor and producer, “This is celebrating somebody who, if he’d said those things about any other ethnic group, he would not be on SNL.” Sure, SNL is a comedy show and they can make fun of things that many wouldn’t, but I didn’t realize that that meant supporting racism.

This hurts because being Mexican isn’t just the color of your skin, or the place where you or your parents were born. Being Mexican is our identity. It is who we are. The reason the insults affect us so much is because we know we aren’t those things. We know that we are not rapists, drug dealers, or criminals. We are human beings.

I was born in America to Mexican parents. My entire life I have told people I am a Mexican-American. Mexican because of the blood that flows through my veins and American because this country is the only one I call home.

If Trump devaluing an entire ethnicity isn’t enough to convince you not to vote for him, then think of all the other communities he’s insulted. Women, other ethnic groups, and people with disabilities have also been insulted by a man who wants to be president and currently leading in the polls.

Donald Trump is a bully. He is not the type of man who we should have or want as president. All he has done so far is insult practically everyone expect for white supremacists. The only good thing that has come out of this is that Latinos and Hispanics have realized that they don’t want to be insulted anymore. They have decided it’s time they were given respect.

President Trump wouldn’t make America great. America isn’t perfect and she probably will never be, but it is our duty to get her as close to perfect as we can. Getting rid of racism would be a step in the right direction, and we can’t do that if our president is a racist. So please, DUMP TRUMP.

To read the first article of Living in White America click here.

This is the second article of the column titled “Living in White America.” Every month there will be a new article discussing how one immigrant group, Hispanics/Latinos, live in America. This column will have articles dealing with anything and everything that concerns Hispanics/Latinos, this could include political and social talks. Some articles may discuss a culture of a different Hispanic or Latino group and interviews with a variety of Hispanics/Latinos will be added as well as interviews with non-Hispanics/non-Latinos asking for their opinion. Discrimination against Hispanics and Latinos has gone on long enough and now it’s time people get a look into a world they dislike so much.