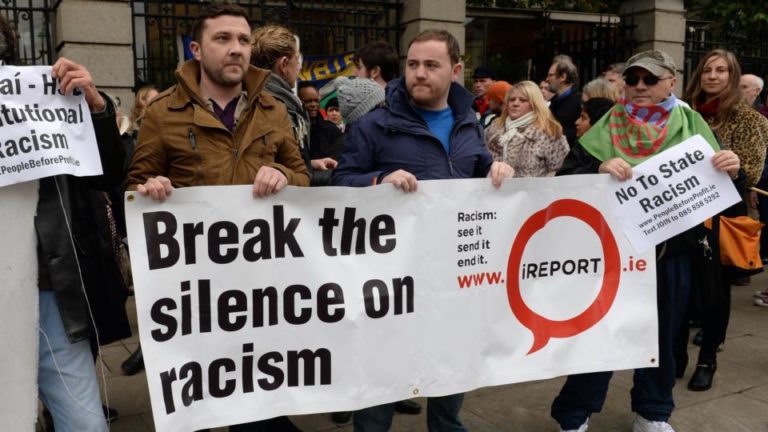 Racism is one of those topics that people want to slide under a rug and not talk about. Usually, it’s white people. In general, white people aren’t aware of their own privilege simply because they don’t need to be. White people don’t have to face the racial discrimination that people of color have to deal with and even those who are aware of their privilege don’t “help” out people of color.

Dr. Beverly Daniel Tatum writes in her article titled, “Defining Racism: ‘Can We Talk,'” that there are three forms of racism: active-racism, anti-racism, and passive-racism. She writes:

“I sometimes visualize the ongoing cycle of racism as a moving walkway at the airport. Active racist behavior is the equivalent to walking fast on the conveyor belt. The person engaged in active racist behavior has identified with the ideology of White supremacy and is moving with it. Passive racist behavior is equivalent to standing still on the walkway. No overt effort is being made, but the conveyor belt moves the bystanders along to the same destination of as those who are actively walking. Some of the bystanders may feel the motion of the conveyor belt, see the active racists ahead of them, and choose to turn around, unwilling to go to the same destination as the White supremacists. But unless they are walking actively in the opposite direction at a speed faster than the conveyor belt — unless they are actively anti-racist — they will find themselves carried along with the others.”

Active racism is behavior that would be deemed racist such as violence and overt discrimination. It’s typically fairly easy to see when someone exhibits racial behavior. These are the people who go out of their way to be racist.

Anti-racism is the exact opposite. These are the people who go out of their way to make a difference. To be different. They are the ones who are AWARE of their privilege and who do whatever they can to dismantle systematic racism. The reason these people are praised for supporting the ideas and general lives of people of color is that they are working AGAINST the system. They are going against social norms and everything that they have grown up listening to.

Finally, if you aren’t a racist who is happy for the oppression of minorities but you also aren’t doing anything to support them in escaping their oppression then you exhibit passive racism. Think back to the conveyor belt example. Just because you are facing in the opposite direction, you are still going in the same direction. You are still going the same direction as those who exhibit active-racism. Being aware of the system in which you benefit from and doing nothing about it doesn’t mean you are helping in any way. You are simply content with continuing to benefit from the oppression of others.

Choose which form of racism you want to exhibit. Putting the topic of racism underneath a rug is something we can’t do anymore. Something we should never have done. Racism is alive and that doesn’t change even though there are people who don’t believe that it still exists.

It’s obvious to see. We see it when a black football player exhibits his first amendment right and gets told to shut up and to be grateful for the fact the he was raised by white parents, we see it when unarmed black men are shot, and we see it EVERYWHERE. Racism exists wherever we look. From the people who insult and attack those of other races to the people who protest social inequality, and to the people who sit down and do nothing.

Who are you? A racist, a supporter of social equality, or someone who does nothing?

This is the tenth article of the column titled “Living in White America.” Every month there will be a new article discussing how minorities live in America. This column will have articles dealing with anything and everything that concerns the under-represented groups of White America. This could include political and social talks. Some articles may discuss cultures of different groups and interviews with a variety of people including those of the racial majority. Discrimination against everybody but the racial majority has gone on long enough and now it’s time people get a look into the worlds of those they dislike so much.