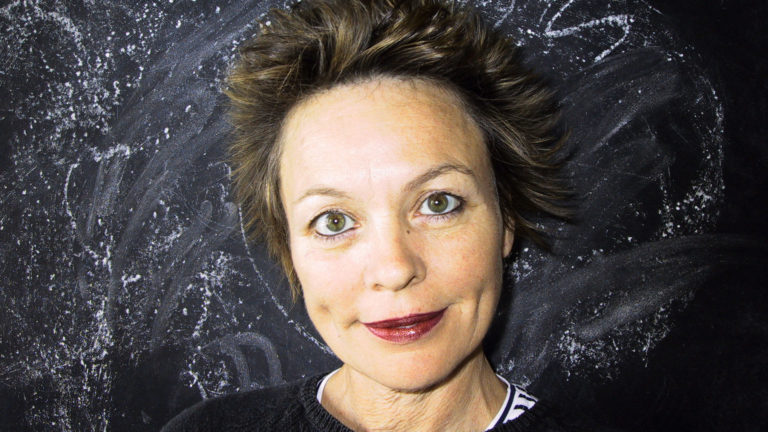 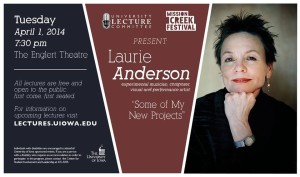 Her art has appeared in galleries such the Museum of Modern Art, on screen on PBS, and she was even the first (and so far only) artist-in-residence for NASA.  She stopped by Iowa City on Tuesday night to discuss some of the projects she is currently working on.

Laurie began the night by discussing some of her smaller works currently in progress.  She kept the mood light and joked around, asking for an open dialogue among the audience.  One of the most surprising and attention grabbing topics was her involvement in a kung fu movie she was producing: Final Weapon 2.  The movie, she said, would focus on tai chi and kung fu masters intertwined with a Mexican drug cartel.  A slightly different, yet just as interesting, project she briefly discussed was ghostwriting a book about the history of the bagel.

The main focus of the night was a new movie that she was working on.  The working title, “Every Love Story is a Ghost Story” is a quote from the late writer David Foster Wallace.  From what was shown, the movie doesn’t seem to have a clear plot line.  The project, which was supposed to be only forty minutes but has now grown into a two hour feature, includes a variety of different stories.  One of which, which she briefly discussed, was centered around her dog, who had gone blind and was learning how to play the piano.  The film showed home footage of the dog pounding its paws on the keys while barking on beat.

The film ended with beautiful sequence of Manhattan filmed with a camera attached to the roof of a car directly facing up, scanning through the towering skyline.  A narration of Laurie’s artificially deepened voice discussed the concept of time, questioning how its measured before slowly fading away.

One of Laurie’s most interesting features is her ability to change the tone so suddenly.  During her story readings and while discussing the film, Laurie took an audience booming with laughter to absolute silence as she abruptly switched to topics of a dying loved one and even mentioning the world left behind after 9/11.  Laurie played off this silence, using long pauses in her speech that could be felt all throughout the theater.

The final part of the night was a brief Q & A.  Members of the audience stepped forth to ask about the conflict of science and art, her use of comedy in her art, and one member even offered hugs which she graciously accepted.  The night ended with Laurie telling a story about the late John Cage, an experimental composer.  Laurie explained that during his final days, she had the task of interviewing him.  There was one question she hesitated to ask: is the world getting better.  Laurie, with a smile on her face, told the audience that yes, according to Cage, and to Laurie as well, the world is always getting better.

For more information on Laurie and her past and present projects, visit her website.  Also, take a look at the video to her song  “O Superman” which reached #2 on the UK pop charts in 1981.

Missed the lecture?  There’s still plenty more to do at Mission Creek Festival throughout the week.  Check out their website for a full lineup.