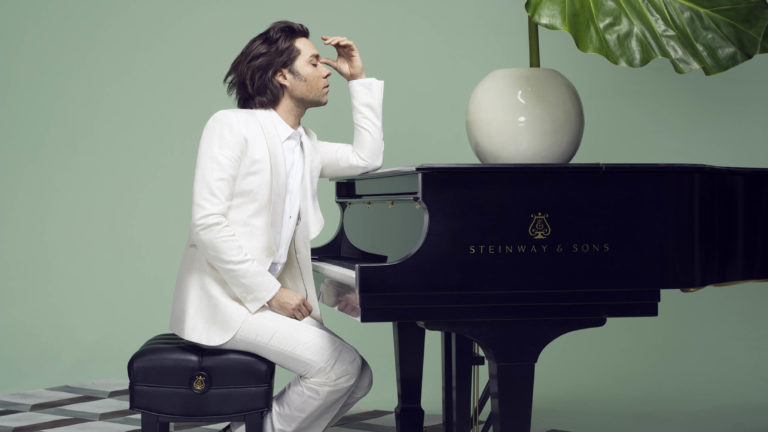 Rufus Wainwright and Laura Gibson performed their sets at the Englert on the fifth day of Mission Creek in Iowa City.

As I usually like to do, I went into this show almost completely blind. I knew nothing about Laura Gibson and had only done a quick Google search of Rufus Wainwright to see if he was the same guy I thought he was. (He wasn’t). All I knew is that he had written some really sweet operas and was an amazing pianist, which is really all I need to know I want to see a musician live anyways!

While waiting outside for sound check to finish up, I was told that the pass I had only granted me standing room. I was mildly irritated but understood. The line had grown from the entrance to the Englert to at least a block or two west. Clearly, this guy must be good if there are so many people waiting.

I make my way into the building and notice that I must be one of the youngest people in the theater. There are many middle-aged or elderly people in attendance, including the most precious old couple that was holding hands throughout the entire opening performance. I also notice that the only instrument on stage is a piano, and this only makes me more antsy for the performance to begin.

After two people representing Mission Creek tell us that the piano sitting behind them is brand new and had never been played before (it was pretty cool to imagine that such an esteemed artist would be the first one to work with it), Laura Gibson walked onto the stage. As soon as I hear her voice, I know where I might’ve heard her before. She released a stellar cover of “Edelweiss,” my favorite song on planet Earth. Her voice is pretty buried in the song behind the music, so it will be a lot easier to hear her vocals while she is performing for us.

I’m impressed by her performance and even more impressed by her presence. Her commentary on her own music was interesting. She tells us that the title of her latest album, “Empire Builder,” seems self-righteous, but it’s actually just the name of the train she took when she moved across the country. She says that it is inspired by the people she met and saw on that train, and also about how it was a three-day trip filled with self-doubt.

Overall, I like Gibson’s music, but it’s not anything I’ve never heard before. I will probably listen to it again (I did last night after I got back home from the concert) but I’m still looking for something in her music that really sets her apart.

During the intermission between Gibson and Wainwright’s performances, an Englert employee asks me if I would like for him to find me a seat, to which I almost screamed out of pure relief. He finds a single seat in the center of the fourth row, which is much closer than I’d expected to be in any circumstance.

As Rufus walked on stage, he gave a little bow towards the crowd which had gone insane with applause, walked directly to the piano bench, and started passionately playing the piano with no introduction. He almost cut the audience off with their welcome so that he could start playing sooner. Then he opened his mouth to begin singing and I understood why the audience had gone so out of their minds for him.

It was like he was a machine. I have never heard someone sing like he did right before my eyes, and I also don’t think I’ve heard a voice like his ever. It didn’t falter a single time in his performance, and it was so effortless. Each note was so intentional. As he played the piano or the guitar, it never took attention away from his voice. At some times, it was easy to forget that he was playing an instrument at all because I was so captivated by his voice alone.

He also talks to us in between his songs almost every time. In the last half of his concert, he talks about how important the mid-term elections will be, and how imperative it is to vote no matter what you believe. He talks about how an audience member in one of his last shows booed him as he talked about it. When asked why, he said something to the extent of “You’re just a singer, who are you to tell us this?” Wainwright told us to heckle him so that he could say what he wished he’d thought on in the moment.

Wainwright told us to heckle him so that he could say what he wished he’d thought on in the moment. We did and he got his redo. “If I don’t say everything I can now to make as much change as possible, someday I won’t be able to say anything.”

Near the end of his performance, he sings a song without an accompaniment. It was just him and his voice, and I don’t think I’ve ever seen an audience so silent and so captivated.

I would recommend that everyone immediately, right this moment, go an look up Rufus Wainwright. I don’t know if you’ll be able to get the same experience by a recording as you ever would’ve gotten by going to see him, but you still need to hear it.

Listen to Laura Gibson and/or Rufus Wainwright below!