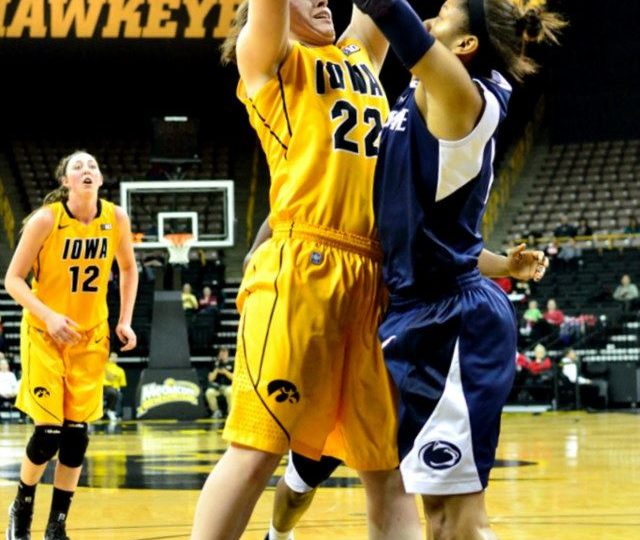 Iowa took on the No. 9 Penn State Lady Lions Thursday night at Carver-Hawkeye Arena. The game started out at a level pace and Iowa taking an early 6-3 lead over Penn State. Iowa picked up an offensive rhythm that allowed them to stay relevant up until the end of the first half.

In the second half they crumbled under the added defensive pressure Penn State put on. Even head coach Lisa Bluder thinks that the Lady Lions’ defense late in the game forced the Hawkeyes to make some “mental mistakes.” Bluder was “defensively disappointed” and felt her team gave Penn State too many “easy scoring opportunities.” Penn State shut down Iowa 81-69; leaving them 11-1 in conference play.

As the second half ensued, Iowa let their yo-yo 2-4 point lead increase finding themselves in double digit deficits numerous times. Penn State ended the game with four players in the double digits. However, most impressive was junior guard Maggie Lucas. With 21 points on the night, Lucas’s shooting was always on time and she had incredible precision.

This is the fifth game in a row that Iowa has lost, and the first time this season they have lost to a ranked team. Prior to this loss, they were a strong 6-0 against ranked teams. Reeling from the loss against Nebraska Monday (February 11) night, it would seem like Iowa wouldn’t have let this game go un-won. However, they experienced numerous pitfalls in this game that seem to be the same issues they face each game, ultimately leading to their demise.

Large portions of their points go down the drain at the free throw line. When it comes to free points, you’ve just got to take them. One player the Hawkeys can count on to make free throws just about every time though is senior guard Jaime Printy. Printy currently ranks fifth nationally for her free throw percentage. Due to high ball pressure and amazing defense on Penn State’s end, much of Printy’s shine was dimmed this game. Her usual three point shots just weren’t there tonight.

The Hawkeyes do not have a break in schedule coming up for them and really need to work on strengthening their defense amongst other areas if they want to be successful. They take on number 13 Purdue, as well as Nebraska again—both on the road. It will be especially interesting to see if they hold their own against Nebraska since they struggled earlier this week from their own arena. The imperativeness cannot be stressed enough, the need to win at least one of these games.