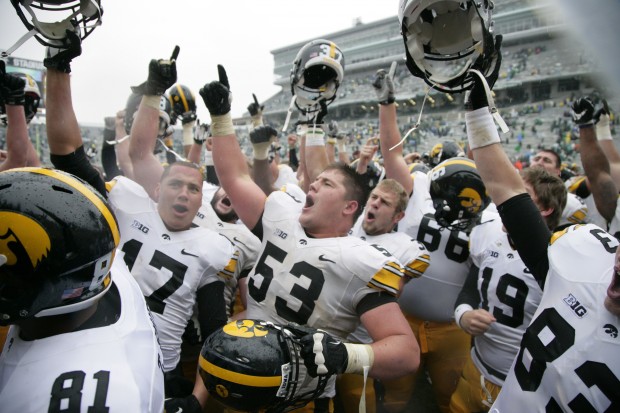 Three weeks ago, the Iowa football team was down in the dumps.

The Hawkeyes wrapped up their non-conference schedule by losing to lowly Central Michigan in Kinnick Stadium. CMU scored a touchdown, recovered an onside kick, and ran a couple positive plays to setup a field goal and win all within the last 100 seconds of the game.

Kirk Ferentz and Co. had their work cut out for them. A .500 record going into Big Ten play for the first time since 2000 didn’t equate too well. It was going to be a long season, perhaps a losing season — even I wrote about it.

Forget about all of that. Iowa has suddenly turned the season around about as fast as it was counted out.

After a dominating win against Minnesota on Sept. 29, the Hawkeyes went into the bye week last week with a bit of momentum. Well, now they have heaps of momentum.

Iowa played just about a complete game against Michigan State on Saturday, getting out of East Lansing with a victory in two overtimes, 19-16. And it was the defense and special teams, two steadily improving units that were criticized vehemently pre-season, that ultimately put Iowa over the top in Spartan Stadium and improved its record to 4-2.

The linebacking corps of Anthony Hitchens, James Morris, and Chris Kirksey have been nothing short of extraordinary. All three have stabilized the opposition’s run game, almost always finding their way to the ball-carrier. Hitchens is second in the nation with 78 tackles while Morris is 33rd with 60.

Through these first six games, the defense has yielded just 17.2 points per game and have held all six opponents under 400 total yards.

The offense is still on some rough footing — 5th-year senior James Vandenberg has thrown just two touchdowns — but Mark Weisman continues to flourish at running back. Weisman has rushed for over 100 yards in four straight games, including 116 and a crucial touchdown against Michigan State.

Remember, Weisman was essentially a no-name seven months ago during spring ball. Not only was he at fullback instead of running back, but he was No. 2 on the depth chart. Over 600 yards and eight touchdowns later, he is a legitimate contender for conference player of the year.

But there is even more reason for optimism.

Iowa is 4-2 and tied for first atop the Legends Division with Michigan, with very winnable games coming up against Penn State at home and Northwestern and Indiana on the road.

And what do you know — the Hawkeyes play just one team currently ranked in the Top 25 the rest of the season: Michigan. The Wolverines haven’t beaten Iowa since October of 2006, and Denard Robinson has had his fair share of struggles against the Black and Gold the last two seasons.

Three weeks ago, Iowa was headed for a 5-7 season and no bowl game.

Now, the Hawkeyes already have four victories with ridden Penn State and struggling Indiana and Purdue teams dotting the schedule for three out of the next four match-ups. Northwestern is beatable on Oct. 28 in Evanston and then there’s that Michigan game on Nov. 17.

You can make your own projections or have your own reservations. But Iowa might remain in first place for a lot longer than any of us could have imagined.