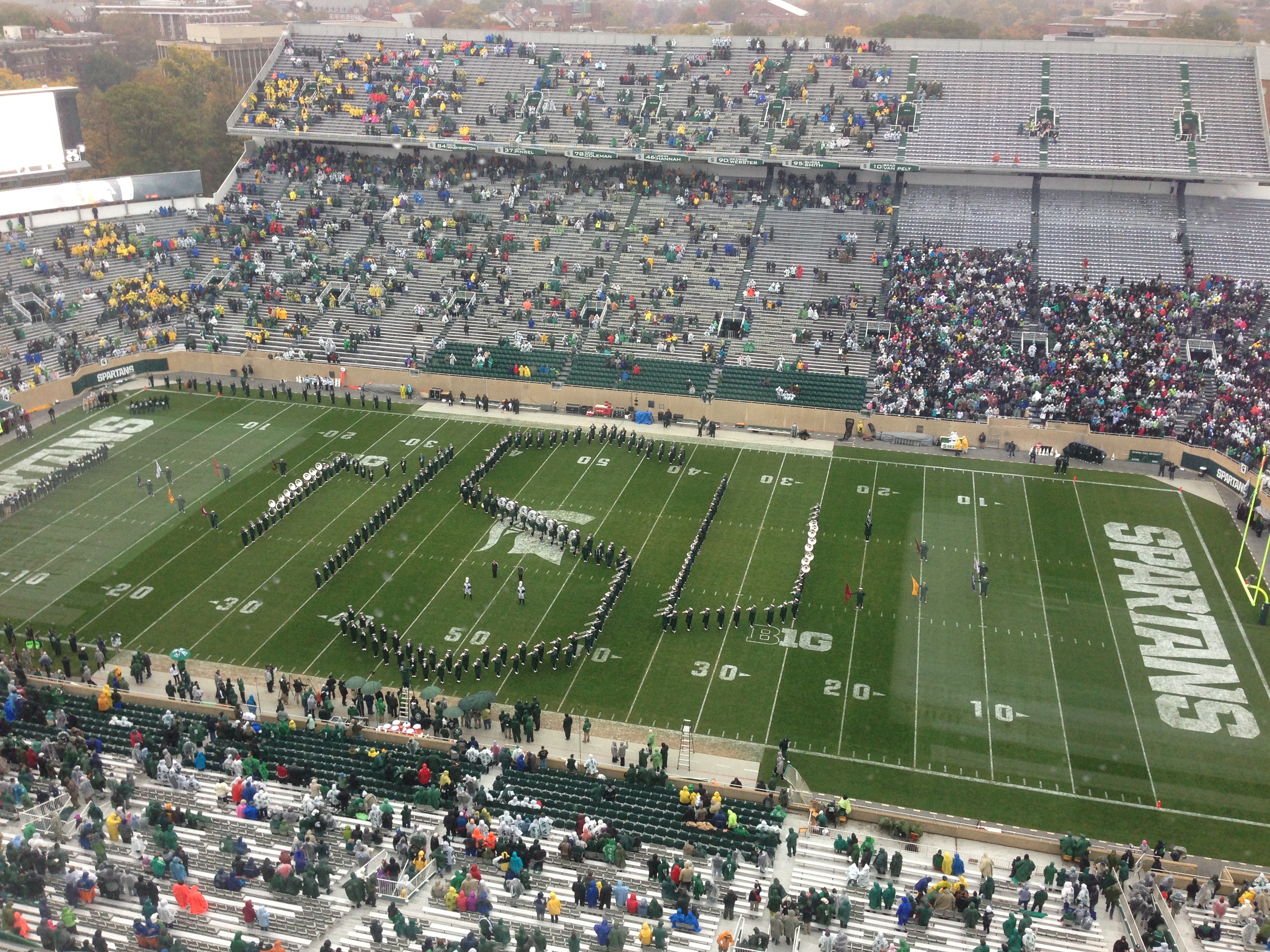 Iowa returned to East Lansing on Saturday for the first time since 2009.

The last time the Hawkeyes visited Michigan State, Marvin McNutt caught a last-second touchdown pass as time expired, tearing a victory away from the Spartans and stunning all of those in attendance.

Iowa entered Saturday’s game 3-2 on the season and 1-0 in the Big Ten Conference, going up against a 4-2 Michigan State team that was 1-1 in Conference play.

The weather to start the game in East Lansing was miserable to say the least. There was a steady rain and a temperature of 41 degrees, leading to a lot of empty seats.

On the opening drive, Iowa quarterback James Vandenberg quickly threw an interception, giving the Spartans good field position. Michigan State would begin the drive from the Iowa 26 yard line and quickly turned things over to running back Le’Veon Bell, who would proceed to plow his way through the Hawkeye defense, scoring the first touchdown of the game.

The rest of the first half was rather un-eventful. Both teams struggled to do anythingwith the football, especially Iowa who ran a total of 29 plays for 65 yards. After exchanging field goals, the Spartans led 10-3 at the half.

The third quarter provided more of the same as the Hawkeyes offense struggled to move the ball and stay on the field and the defense continued its “bend, don’t break” style it has had all season.

In the last five minutes of the third, fan-favorite Mark Weisman broke-off a major run, leading Iowa into Michigan State territory for the first time in what seemed like ages. The Hawkeyes, however, would fail to reach the end zone, settling for another Mike Meyer field goal, cutting their deficit to 10-6.

Following an Iowa field goal to start the 4th quarter, Andrew Maxwell and the Spartans orchestrated a 72-yard drive, taking 6:27 off the clock. However, thanks again to the Hawkeye defense, Michigan State had to settle for another field goal and the lead was back to 7. The Hawkeyes, however, would refuse to go quietly.

With just over five minutes to go in the game, James Vandenberg and the Hawkeye offense would go to work, starting the drive with a 1st and 24. However, after a spectacular 37-yard pass-play to Keenan Davis, the Hawkeyes were given new life, and Mark Weisman would cap a 68-yard drive with a game-tying touchdown.

Regulation would end in a 13-13 tie, sending the game to overtime.

Iowa would win the toss and the defense held Michigan State to a field goal. All Iowa had to do was score a touchdown to win the game, but they would have to do so without Weisman, who suffered an ankle injury on the previous drive. The Hawkeyes would again struggle to score and had to settle for a field goal of their own, sending the game to a second overtime.

Starting the second overtime period on offense, the Hawkeyes struggled even more to move the ball and this time, Mike Meyer would come on to attempt a 42-yard field goal. As he’s done time and time again this year, he split the uprights, giving Iowa a 19-16 lead and putting the game in the hands of the defense.

After a 1-yard rush by Le’Veon Bell on the first play of the drive, Andrew Maxwell would go to the air. This time, his pass was deflected and intercepted by Greg Castillo, sealing the victory for the Hawkeyes on the road in East Lansing.

Saturday’s 19-16 victory was the 100th of Head Coach Kirk Ferentz at Iowa. After the game Ferentz was visibly pleased with his teams performance and tried to play-down the accomplishment. ” Whether it was the 100th or 10th, this is a game I’ll remember for a while because of how hard these guys battled.”

Ferentz wasn’t the only one smiling when he met the media. Every single Hawkeye that walked in the room was ecstatic about the victory and how it had happened.

“I saw [Castillo’s interception] and I’m like, ‘he caught it. Is the game over?'”, said linebacker James Morris.

Greg Castillo had just one thought on his mind, “Just catch it,” he said, “I saw it all the way… I was wearing gloves too so I was worried about dropping it.”

Fortunately for the Hawkeyes, he did not, and the rest, as they say, is history. The atmosphere on the other side of the field was not quite as happy.

“Tough football game today,” said Michigan State head coach Mark Dantonio. “You go from having an opportunity to win at the end of the football game, to losing it in a split second.”

“I think we have to look at where we are as a program right now and what’s the next step for us. When I talk about re-evaluate I’m not talking about personnel I’m talking about what we’re doing right now. Re-evaluate our goals and what we have to do now to win the Legends Division.”

The Spartans now drop to 4-3 on the season while the Hawkeyes improve to 4-2 and stand alone in 1st place in the Legends Division.

The Hawkeyes will now return to Iowa City to take on the Penn State Nittany Lions while the Spartans will hit the road to take on the Michigan Wolverines.