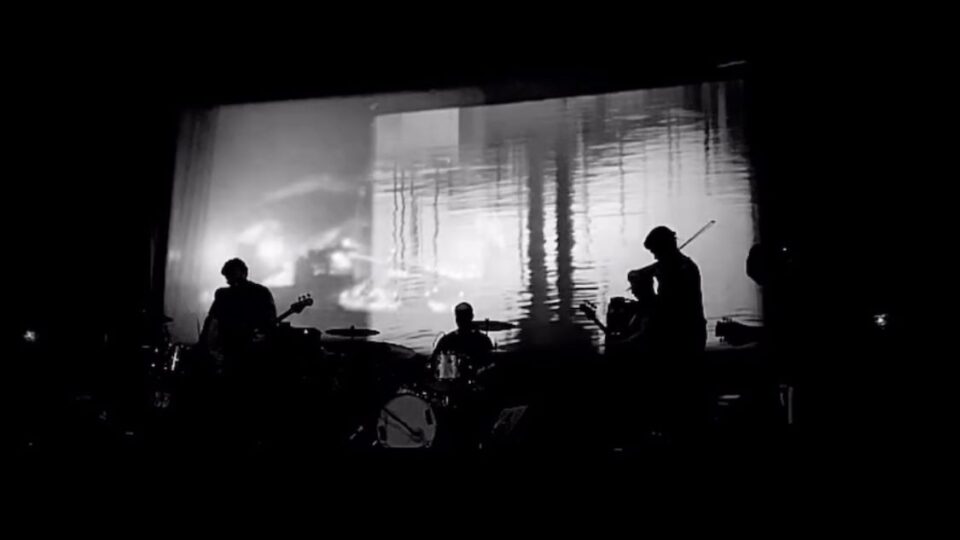 The FEaST festival presented by local organizer Feed Me Weird Things concluded on Saturday evening with Godspeed You! Black Emperor, one of the most acclaimed post rock bands. They played at the Englert Theatre in downtown Iowa City, in the second show of their tour, with opener Marisa Anderson. Together, they brought a modern, experimental take on the vintage theater experience.

Marisa Anderson, originally from Portland, Oregon, opened the night with songs about the American frontier. She focused specifically on the beautiful, unique swaths of canvas in the sky that blankets those landscapes. She played songs about love, and about death. Anderson laced the performance with themes of spirituality and natural wonder. She picked at the notes on her overdriven telecaster, and they resonated like images of a lonely traveler, accompanied only by the surrounding scenery.

Godspeed You! Black Emperor opened with a droning buzz from their amplifiers, with three stark spotlights shining onto the audience. Eight members stood onstage, including founding members Efrim Menuck, Mike Moya and Mauro Pezzente playing guitars and bass. They were accompanied by vast arrays of percussion and violin.

The band began with “Job’s Lament,” and “First of the Last Glaciers.” The latter progressed from light ambient sounds to a series of cascading scales from the basses. Then the music dropped into punches of long, played out notes, in a grand psychedelic climax. Behind them, a projection of birds soared lonely in the sky, overlayed with film of a smoking crashing plane. The images symbolized the music’s continuous rising and falling.

The psychedelic theme continued through the ringing euphonious guitars in “Bosses Hang.” The song then transitioned into a fantastical ambient track, characterized by squeaking violin. The ambience built itself up into a wall of sound and tremolos before crumbling down with a force that shook the ground, ringing out until the reverberations simmered down.

During this, images of a post-industrial wasteland were projected on the screen. Later this was contrasted by images of hands digging through rich fertile dirt. The grainy, black and white film projections define a Godspeed You! Black Emperor show. The projections have an ambient feel that matches the music, but they also serve a greater purpose.

The images act as lyrics for a band that typically has none, other than some vocal samples which were absent that night. The films played can give the songs a meaning for the listener to latch onto. It creates a captivating audio and visual experience, which fit very well inside the vaudeville era Englert Theatre.

The band ended with “East Hastings,” which opened with a lonely desolate guitar riff, underlaid by rolling waves of noise. A piano chop broke through the noise, and a violin echoed the guitar’s bleak riff. Images of political violence played overhead, then quickly switched to pictures of orange, fiery burning towns.

The music transitioned to a frantic, blistering pace, with rapid drums and guitars roaring out like a blade shredding through the air. The song then cooled in a singular, fizzled out drone, much like how the show began. The band members then left the stage one by one.

Godspeed You! Black Emperor’s music is available on streaming services. You can follow the rest of their tour here.

First of the Last Glaciers