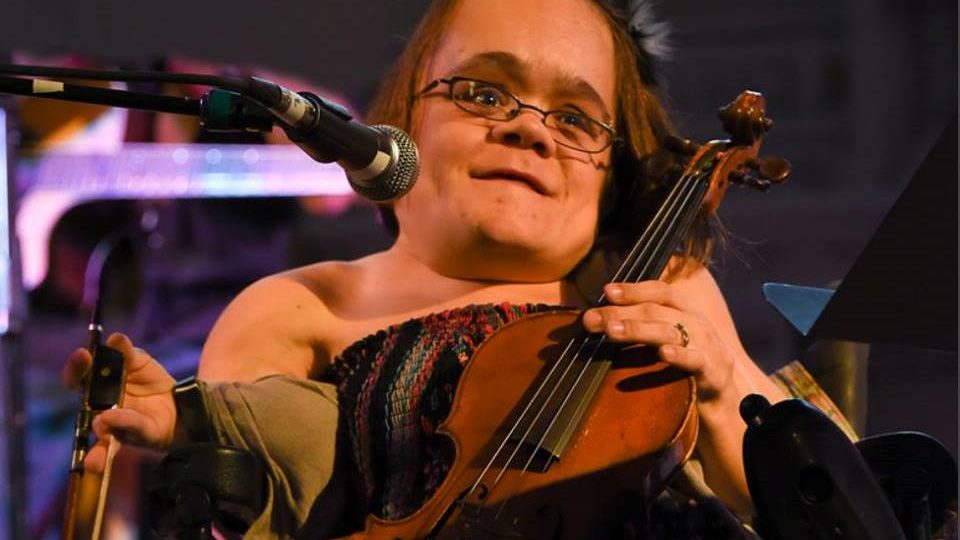 Last night I had the wonderful opportunity to see Gaelynn Lea live at the Mill. She is a classically trained violin player from Duluth, Minnesota with a wealth of knowledge about traditional fiddle tunes. Gaelynn Lea uses a loop pedal to create multi-layered soundscapes, and her lyrics are deeply human. Hers songs make one feel love and understanding.

Gaelynn Lea began the set with “Medley in D Major,” which is an amalgam of all the traditional fiddle tunes she knows that are in the key of D Major. Since she uses a loop pedal, Gaelynn was able to combine and layer all of these tunes together to create a harmonic wall of sound that was truly beautiful.

She followed that up with the first tune she ever wrote, “Watch the World Unfold,” which is about wishing we knew what was coming down the pike, but we never know until we get there. She asks us, what makes us think we have a right to know what will be? What makes us so special? The song was haunting, beautiful, and vivid.

Gaelynn Lea followed that tune up with “Swallowtail Jig,” which is an Irish folk song. She told us that many traditional fiddle tunes have been passed down for hundreds of years, without even having been written down: they were just passed on from one person to another directly. “Swallowtail Jig” appears in the film Titanic, when Rose and Jack dance together with all the poor people.

Next, she played another original of hers, “Let It Go,” which is not from the film Frozen. She wrote that tune before Frozen came out. This song is from when she was in the band Murder of Crows (with whom she still occasionally collaborates).

Next, Gaelynn Lea performed an arrangement of “Boys of Bluehill,” which is on her new EP, The Songs We Sing Along the Way. Her arrangement created a warm, ambient soundscape but was nevertheless very dancy.

Next Gaelynn Lea performed the song with which she won NPR’s Tiny Desk Contest, “Some Day We’ll Linger in the Sun,” a very deep song about how love can be beautiful even when difficult. Gaelynn Lea wrote this song after a medical emergency that made her stay in the hospital for some time. Her husband stayed with her every night, and this song is about their love and going through this difficult time together. I’m pretty sure it was in a harmonic minor key. It had a longing to it, but the harmonies also created a strong sense of peace.

Gaelynn then treated the audience to a preview of a song that will be on her next record, which she plans to release in 2018. The song is “Bound by a Thread,” and features a pizzicato rhythm with a legato lead. The song is very contemplative. The message is that we’ll see the fruits of our labor, maybe not now, maybe lifetimes ahead, if only love will be our guide.

Then she asked the crowd for help with another Murder of Crows song, “Birdsong.” She asked the audience to sing the lines, “Bird, why do you sing? Fate has clipped your wings,” while she sang and fiddled over the top. She played a few more traditional tunes arranged for solo violin with loop pedal. But Gaelynn Lea also played a cover of the Melvino Reynolds tune “Little Boxes,” which you might remember from the show Weeds, and a cover of the Pigface song “Point Blank.”

The second-to-last song was a spoken word poem of hers, “Breathe, You Are Alive,” which is also featured on The Songs We Sing Along the Way. She speaks over a pizzicato rhythm she has plucked. She reminds us that we make ourselves up, put ourselves out there, and we don’t really know how others are going to react to us. This was the second time I wept during the performance. She finished up with a Scottish farewell tune, “Parting Glass,” as a way to say thank you and good night. As usual, her fiddle chops were on point.

Gaelynn Lea plays music that heals the heart. It is deep, and seems to express a longing for something, a longing so profound we don’t even know what we are longing for. Yet the music is also joyous, uplifting and triumphant. There is no doubt about it: Gaelynn Lea sings with voices from the ages, and through her our ancestors speak to us. She blends the ancient and the contemporary seamlessly. She has tapped into something deep, universal, and ancient. She is a wonderful presence to be around, and I feel lucky to have seen her show.