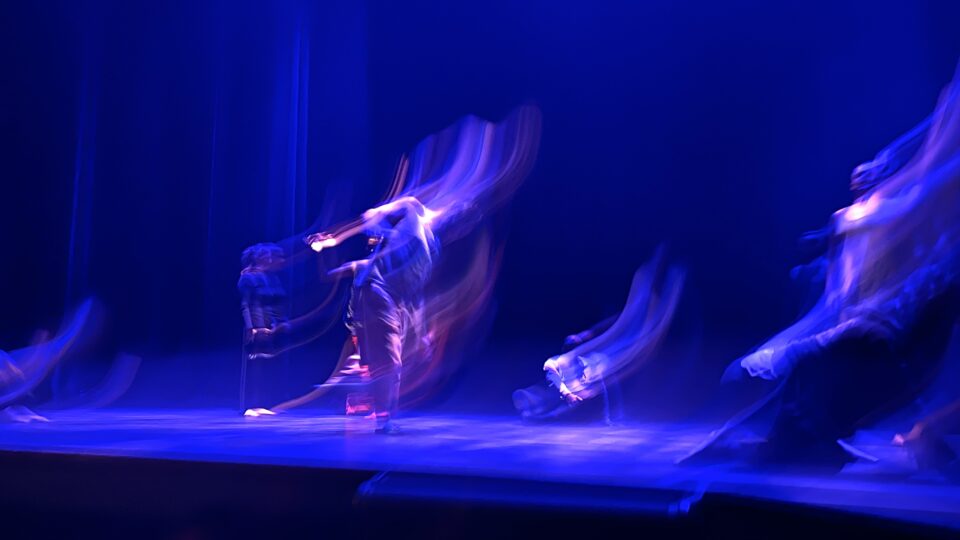 When I set out to write the preview for this dance program, I could find practically no information. A one sentence description from the University of Iowa’s dance page was about all I got after hours of research. It was as if the very concept of the show was meant to be a mystery – a guarded secret. Now, after watching that mystery unfold on stage in front of me, I am so grateful that I wasn’t in on the bit.

If I had to choose one word to describe this performance, it would be raw. At all stages in the show, you could feel the vulnerability, the power of these dancers. The performers presented their hearts and minds in a web of art forms – interlocking movement, comedy, poetry, and music. Their roles as performers, but also their individual identities, were never hidden from us.

As audience members trickled into the Englert, handpicking their seats on the floor, we watched the dancers stretch and warm up. Their bodies bent and contorted in impressive ways, but not in a boastful way. It was a glimpse into the world of dance and the community built between performers. They rehearsed moves and conversed with each other, occasionally waving to the audience as they spotted a familiar face. Immediately, the audience was immersed along side them on their stage – no boundaries or exclusivity.

The show was divided into three acts, all directed and choreographed by Jennifer Kayle, associate professor at the University of Iowa. Kayle also co-directs the university’s MFA program. The three acts were titled “Nocturne for Sleepwalkers,” “Turns at the Intersection,” and “Another Stage of Staging Ourselves.”

When the first act began, you could feel the dancers shift into focus. The performers delivered their moves with unmatched liveliness. The audience laughed and grinned as the performers tossed pillows back and forth – a visual expression of the energy exchanged between them. They delivered comedy exclusively through motion, calling Charlie Chaplin to mind.

The second act, “Turns at the Intersection,” maintained the first act’s palpable energy, but expanded its influence beyond choreography. The back curtain of the Englert’s stage lifted to reveal two sound technicians who worked in tandem with the dancers to create an improvised performance. The hypnotic, pulsing soundtrack intermingled with the dancers’ intermittent narrations. Taking turns at the mic, some performers briefly detailed their experiences. Others ventured into the audience, asking for our experiences to narrate the movements unfolding onstage. The musicians then remixed and echoed these sound bites, creating a surreal atmosphere of total truth.

The experience was severe in its simultaneous approachability and intimidating rawness. The act concluded with two duets, inspired by weightlessness, which we had just seen be developed, reworked, and finalized. These overlapping art forms captured the human experience in a stunning and inspiring way. I have so much respect for the creativity, vulnerability, and genius of these artists.

Brady Van Patten and Zachary Bird performed the third and final act. The duo once again immersed the audience in their creative process by combining choreography and dialogue. The pair effortlessly transitioned from comedy to vulnerability, raw movement to narration. You could never guess their next step. Each phase revealed a new truth about the performance and the performers.

Brady and Zach boldly retold the intricacies of queer identities and relationships. They tore open the pushes and pulls of life – the forces that act on all of us but seem so personal. The performance capitalized on the anticipated intensity and the liberation of honesty.

All three acts of this performance completely blew me away. Its intentional mystery left the interpretation of this piece to the audience. Every moment infused centering and reflection. The performers silenced our minds and awakened our hearts, forcing us to acknowledge how unique this night was, that there would only be one performance like this. “Another Stage of Staging Ourselves” perfectly encapsulated the humanity of movement and art.