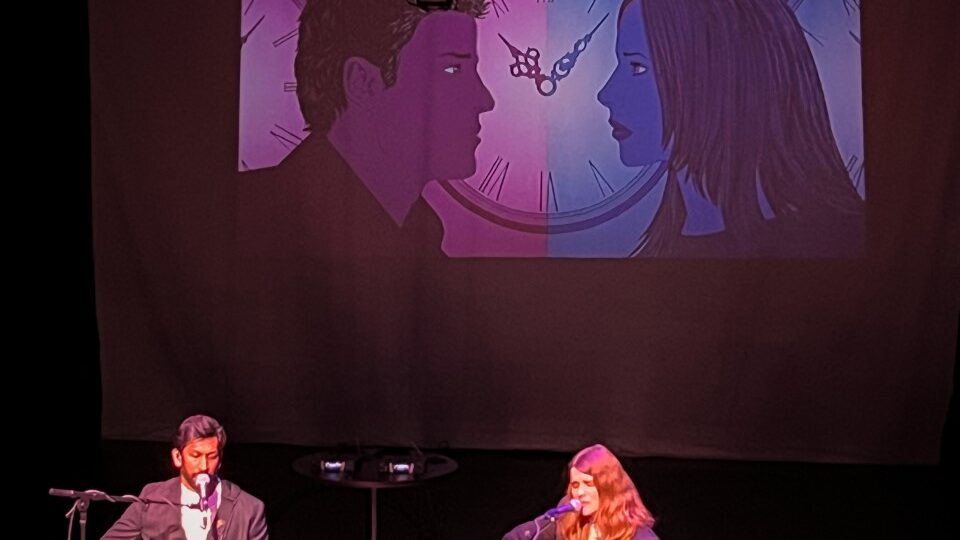 On Thursday, October 27th at The James Theater, Hrishikesh Hirway and Jenny Owen Youngs performed for a full crowd. I found a seat in the sea of people. The lights dimmed and our special guests appeared. They were met with a wave of applause.

Hirway and Youngs were quick to show their personalities and steal our hearts. They were funny, charismatic, and overall charming. Youngs even called us their friends. They were excited for their “extensive three day tour of the Midwest.”

The two clearly shared a meaningful bond. Hirway acknowledged Youngs’s exceptional career and Youngs called “Rishi” a “notable podcaster and cool guy.” It was impossible not to smile and laugh with the joyous duo. To start the show off, they detailed lovable stories from how they almost met, how they did meet, Hirway’s marriage, Youngs’ teenage years, and other fun snippets from their careers.

Jenny has just concluded her podcast “Buffering The Vampire Slayer,” and she wrote an original song based on each episode. The singers performed a delightfully chilling song called Hush. Their smooth voices melted together perfectly and I had goosebumps the entire time.  This was the first song they wrote together but definitely not the last.

The artists preceded each song with some background information. The individual pieces meshed together to create a beautiful and calming set. A couple songs including Memory Palace and Between There and Here brought tears to my eyes. Just when I thought they couldn’t top themselves, Youngs performed arguably my favorite song from the show, Next Time Around.

An hour and a half of the friends’ comedic and lovable dynamic was not nearly enough. It was a joyride to be on. Their songs were heart wrenching, and then their whimsical friendship had the whole audience laughing.

The artists shared personal details that furthered our love for them. They covered a range of topics including family, Sandra Day O’Connor, reincarnation, county fairs, and video games. It was a wonderful experience.

The closed the show with their newest song and had the audience sing along to a part of the chorus. It was a charming idea that formed a friendship between everyone in the room. I speak for myself and all of the audience when I say they gained several fans. I even bought their merchandise at the end. Without a doubt go check out Hirway and Youngs’ music and catch them on tour if you can.