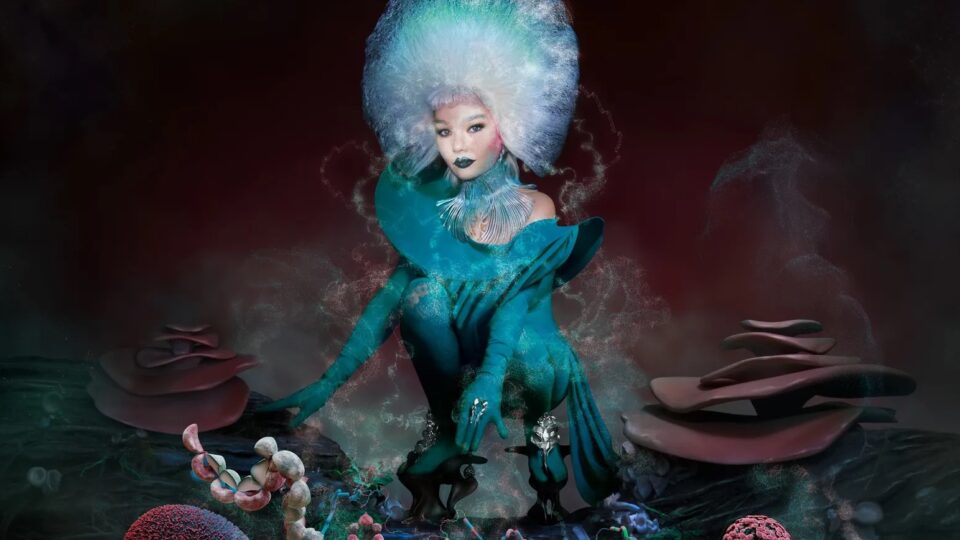 Björk has never been one to shy away from pushing musical boundaries. The 56 year-old Icelandic singer-songwriter-producer has had a nearly three decade long solo career that has consistently warped and redefined what pop music can be. She has created undeniable masterpieces, including “Homogenic,” “Post,” and “Vespertine.” Her recent material has pushed the envelope even further, exploring pop music’s sonic landscapes.

2015’s “Vulnicura” was a heart-shattering view into a failed relationship, while 2017’s “Utopia” ushered in much brighter horizons for Björk. Self-described as her “Tinder album,” the project contained feathery and light instrumentals. While “Utopia” felt like a concert in the sky, “Fossora” digs its roots deep into the earth for a unique conceptual piece.

Recorded over the course of 5 years, some of which were spent in full lockdown, “Fossora” explores the connection between humanity, music, and nature, a prevalent theme in Björk’s previous work. The album’s instrumentals are as sporadic and unpredictable as mushrooms, which influenced the record’s imagery and themes.

The opening track, “Atopos,” is a jarring listen, featuring an off-kilter instrumental arrangement. The song employs irregular bass clarinets that bring both a sense of urgency and uncertainty. The lyrics warn that we must overcome “excuses” for not connecting. “Hope is a muscle,” Björk sings. The idea that hope must be exercised regularly to avoid losing its strength was a bold one to include at the end of such an abrasive track, but Björk makes it work in a way only she could.

“Victimhood” was a personal standout. In a rare occurrence, Björk speaks directly about a topic instead of using metaphors and symbolism. The track employs upfront lyricism with a slow, dark, and foreboding instrumental that utilizes leads from the same bass clarinets as “Atopos.” Björk slowly delivers passages detailing the pitfalls that a mindset of victimhood can lead to. “Rejection left a void that is never satisfied,” she sings. “Only bird’s eye view can help me transcend this archetype, who am I that this has happened to?”

“Allow” with Emilie Nicolas was another favorite, and feels like an outtake from “Utopia.” Gorgeous flutes welcome the listener back to Earth’s surface, and the lyrics revolve around Björk’s undying love of the natural world. The song shimmers with happiness and light describing “the warm open wind on my skin.” “How I long to float there midair, between the branches amongst impossible magic,” Björk sings.

The track “Fungal City” featuring serpentwithfeet is another lighthearted track. The song, scored by winding horns, takes the listener on a trip into a fantasy world and makes the entire song feel endlessly whimsical and romantic. “Fungal City” also hints at a new love interest. “His capacity for love is enormous, his vibrant optimism happens to be my faith too,” Björk sings. The track ends with an instrumental surge that amplifies pure joy, creating a love song that is uniquely Björk.

The title track “Fossora” is another standout, backed by exciting instrumentals that sound like a “Legend of Zelda” soundtrack. The earthy horns and beautiful drum and bass hits accompany lyrics about the planet’s beauty, emphasizing the idea of spreading and growing roots.

A review would not be complete without discussing the emotionally significant “Ancestress” and “Her Mother’s House.” The songs feature Björk’s son Sindri Eldon and her daughter Ísadora Bjarkardóttir Barney, respectively. Each track focuses on motherhood and the deep emotional connections it entails.

“Ancestress” is a touching tribute to Björk’s late mother, who died in 2018. The song details Björk’s loss while also describing how she lives on. It’s more hopeful than mournful, with lines such as “you see with your own eyes, but hear with your mother’s.” “When I was a girl, she sang for me in falsetto lullabies with sincerity, I thank her for her integrity, Björk sings.

“Her Mother’s House” explores Björk’s own experiences with motherhood, and focuses primarily on how her children’s growth and departure has affected her. The chorus paints a bittersweet picture. “The more I love you, the stronger you become, the less you need me,” Björk sings. Another verse says, “when a mother’s house has a room for each child, it’s only describing the interior of the heart.” The song says that a mother is forever connected to her children through love, despite the physical distance between them.

With “Fossora,” Björk has once again proven that she is one of the greatest pop artists of all time. Her innovation and creativity knows no bounds, and this album cements her position in the upper echelon of modern music. Through its masterfully crafted instrumentals, stunning vocal performances, and exceptional thematic consistency, “Fossora” stands as one of the best albums released this year.