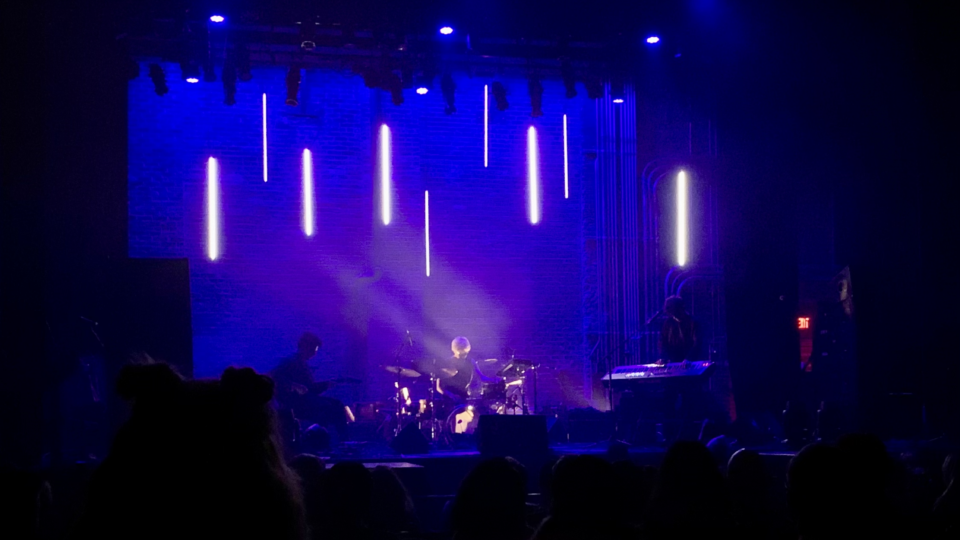 The lights faded to blue as fog lingered in the theater and three silhouettes emerged to take their stations – Ryan Lott on the keyboard, Ian Chang on drums, and Rafiq Bhatia on guitar. White light strips hovered above the band and, in contrast, a warm yellow light highlighted the drums.

Muted piano notes overlapped and fused with a watery rhythm to introduce their first song “Vacancy” from Son Lux’s Tomorrows III album. The dimming and lightning of the hovering light strips mirrored the rhythm that lulled the audience into a trance. Though vocalist, Kiah Victoria, was absent from the track, Lott’s shuddering vocals and Chang’s balanced murmur of percussion still beautifully delivered the song’s emotionality.

Son Lux is known for its genre-less and unconventional sound, yet the sea of headbanging from the crowd and band members spoke for itself. I got so into the songs that when I zoned back to reality, I was headbanging with the best of them.

The reverberating shudders, string lashes, and emerging clock-like pulse from “Plans We Made” in their Tommorws I album kept you enticed. The echo of “What are you doing, love” from “Honesty,” also from their Tommorws I album, melded with the uneasy surge of twisting strings that welcomed vulnerability. Their demonstration of mastery in instrumental manipulation was only the start of the show.

Before starting the next song Lott prefaced, “I’m sure this is the one everyone has been waiting for: Easy” from their 2013 album Lanterns. The crowd erupted in excitement and Lott invited Kassa Overall, a jazz musician performing at Gabe’s later that night, for a surprise collaboration. Overall contributed a melodic rap verse that was unexpectedly delightful.

Lott took a moment before their last two songs to express his excitement for their 40 track, two-hour-long score of original music for the movie Everything Everywhere All at Once. Urging the audience to “Go watch it right now. Well, not right now – at least wait until we’re done.”

The many moving pieces to their live performance shined in Lott’s continuous changing of keyboard wires and Chang’s rotating responsibility between the soundboard and drums. As Lott played an unfamiliar first note for “Last Light” from the Tommorws I album, he paused and said, “That wasn’t right. I knew something was going to get messed up.” The crowd laughed and cheered them on as they finished their last song “Live Another Life” from the Tommorws II album.

This was Son Lux’s first time back on the stage since 2019, not to mention their first-time performing their Tomorrw tracks. Lott expressed his gratitude and was “happy to be back,” referring to their last show for Mission Creek in 2016.

Ian Chang proved his soothingly explosive drum skills a force to be reckoned with. Son Lux’s music is the perfect sonic stimulation brought together by Lott’s hollowed vocals. It espouses vulnerability and invites the audience to join in the experience. Experiencing Son Lux’s music live is the way to go and watching their sound manipulation in action is really something else.