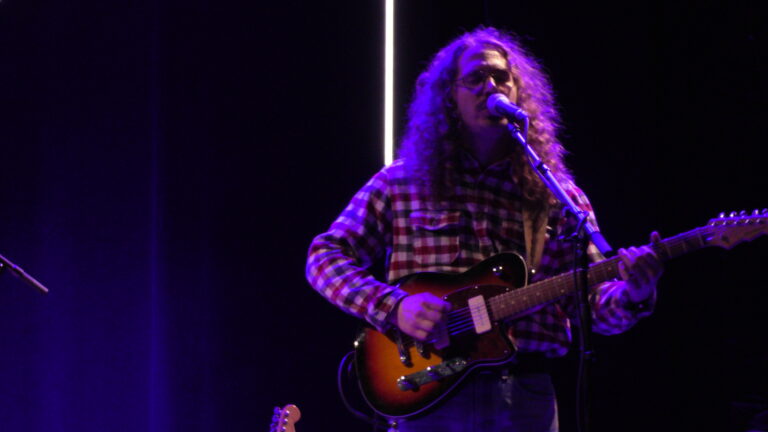 While some Iowa City locals may recognize Charlie Cacciatore from behind the counter of The Record Collector, they are also the face of indie rock act Good Morning Midnight, who played at the Englert on April 8th as part of Mission Creek Festival. I’ve been enjoying Good Morning Midnight shows in this town since I got here four years ago, but I can’t say I’ve ever seen them play a venue quite like the Englert. For one, I had certainly never sat while watching a GMM show–the notion seems almost sacrilegious, but the rows of theatre chairs at the Englert weren’t really inviting people to jump around at this performance. As a rock band that has always been comfortable in the style of lo-fi, I was curious to see how the band would perform under the pressure of the Englert’s high-production live shows and exceedingly large space.

Extremely well, it turns out! The crew energetically railed through a selection of tracks off Songs of Violence, “Josie’s Experiment” off Both Neither and Both, and a couple of new ones too. Cacciatore traded off riffs with guitarist Griffen Clark–both getting their time to shine on extended jam sessions during the set openers–“Deadbeat Pt. 1 & 2” and “Holy Ghost.” Drummer Aaron Knight can both barrel through a beat and patiently hold back, and did both across songs of dynamic intensity. A highlight of the set was “Big Flood,” where Cacciatore mostly shrugged off the melody of the chorus in favor of an impassioned shout, which suited the song well. I’d describe Cacciatore’s shout as having the yelp of early Isaac Brock and the sneer of early Conor Oberst–pretty much it ruled.

From there they played two new songs, “Birds Fly” and one that went unnamed. While Cacciatore tends to have some great lyrics that meld the physical and emotional, (There’s no loneliness and there’s no pain / There is only the falling rain, it’s an ideal / But I’m not gonna reach for it on “Holy Ghost”) “Birds Fly” is an instance where they let Cole Hatsky’s cool, lumbering bassline do most of the talking. It culminated in a pretty raw slowcore jam. Their other new song had an almost classic rock quality to it with its soaring guitar lines but still kept its indie rock grit. “Josie’s Experiment” was a nice nod to GMM’s earlier years and worked exceedingly well in the Englert’s dazzle–a reminder that great songwriting transcends lo-fi-dom.

Cacciatore and Co. closed with “And to All the Lonely Painters,” the last tune on Songs of Violence. In the first moments of the song, Cacciatore repeated a calm guitar riff and the room was quiet enough to hear the lone snare rattling. Clark, Knight, and Hatsky joined in, proceeding with the tune as it reached a natural crescendo. This has been a favorite of mine in GMM’s catalog since it released and the crowd seemed to agree. The audience roared in applause when the instruments ceased as Cacciatore was still trying to sing the momentous words leading into the final jam session. Good Morning Midnight rocked the Englert in the strongest performance I’ve seen from them yet.