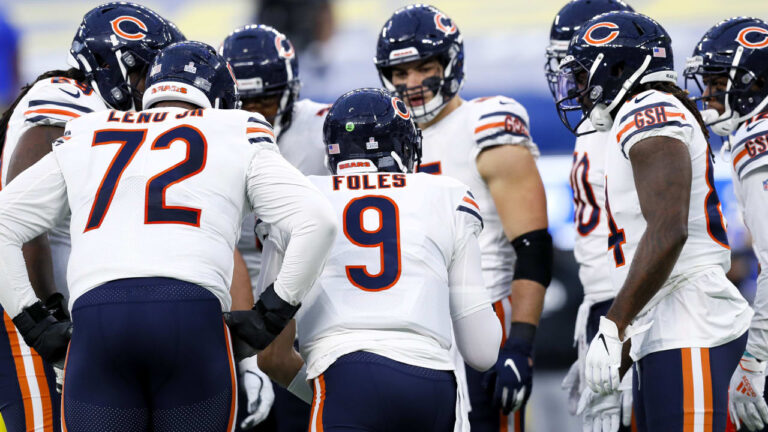 The leaves are falling

The wind is crisp

It’s that time of the year, folks. With Week 8 in the books, we’re officially about halfway through the NFL regular season. It’s the time of year when early season struggles turn into long-term problems. When slow starts become miserable middles. When the contenders start to separate themselves from the pretenders.

Traditionally, superlatives are given out at the end of the year – a fun reflection on the times we had and the people we met. But this year, since nothing has been traditional, I’ve decided to give out superlatives at the halfway point in the season. So without further ado, here are a handful of midseason superlatives for the NFC North.

At almost 37 years of age, Aaron Rodgers is having one of the best years of his career. Through 7 games, Rodgers has tossed 1948 yards and 20 touchdowns while only throwing 2 interceptions. The craziest part? Only one Packers wide receiver has more than 16 catches. Due to a lack of wide receiver depth, Rodgers has relied heavily on Davante Adams and the tandem of running backs to carry the passing game as well as contributions from tight end Robert Tonyan. The Packers offense has, maybe unexpectedly, been a well-oiled machine this year, and Rodgers deserves a lot of credit for it.

Aside from the Houston Texans, the Vikings have to be the most disappointing team in the NFL this year. Projected to compete for the division title coming into the season, the Vikings now find themselves 2-5 and facing a tumultuous offseason. Already, the team has traded away recently acquired star defensive end Yannick Ngakoue. While they are fresh off a much-needed win over the Packers, it’s hard to see the Vikings digging themselves out of a hole of this size.

Since my mostly negative 1st quarter of the season performance review of the Lions, the team has quietly scraped together a respectable 3-4 record. Like Lions teams of the past, Detroit appears capable of beating any team on any given day, but general inconsistency and defensive woes will keep them from being a serious contender. Fun fact: if football games were 1 quarter long, the Lions would be 5-1-1.

Not likely to help their cause, the Lions play a gauntlet of a schedule in December – at Chicago, vs Green Bay, at Tennessee, vs Tampa Bay, vs Minnesota. With the exception of the Vikings, there’s a good chance that four of those teams will be jostling for playoff position, and the Lions will have a chance to be a thorn in someone’s side. Don’t be surprised if Stafford and company can’t ruin at least one contender’s Sunday.

One of the few bright spots for the Vikings this year has been the emergence of rookie wide out Justin Jefferson. Through 7 games, the LSU product has amassed an impressive 563 yards, leading all rookies and good enough for 14th-most leaguewide. The Vikings used the 1st-round draft pick they received when they dealt Stefon Diggs to Buffalo to draft Jefferson. Although it’s early, it’s looking like the trade is working out for Minnesota.

Most Likely to Get Coal in his Stocking – Javon Wims

During the 3rd quarter of the Bears-Saints game, Chicago receiver Javon Wims jogged halfway across the field to New Orleans cornerback Chauncey Gardner-Johnson, appeared to rip at his chain, then proceeded to connect two punches to the helmet of the stunned Saints defender. A scuffle ensued, and Wims was promptly ejected. He has since been suspended two games. In response to the incident, Gardner-Johnson wrote on social media “that man punch like a female.” If you haven’t seen the video, I highly recommend it.

This is a loaded superlative. On one hand, the Packers are 5-2, lead the NFC North, and are poised to make the playoffs. On the other hand, the Packers have a tendency to put up duds. After jumping out to a 10-point lead in Tampa, things got ugly, as the Packers gave up 38 unanswered points and were dominated in all phases of the game. Just last week against the Vikings, the Packers defense played as though they had been given sedatives before the game. The first Vikings possession that didn’t end in a touchdown came in the 4th quarter. While the Packers have certainly shown extended periods of dominance this year, these ‘fluke’ games happen a little too often for comfort.

And as Packers fans know, in recent history, the team has had a tendency to completely wet the bed in big games. In the 2010s, Green Bay lost four playoff games by 14+ points – the most of any team.