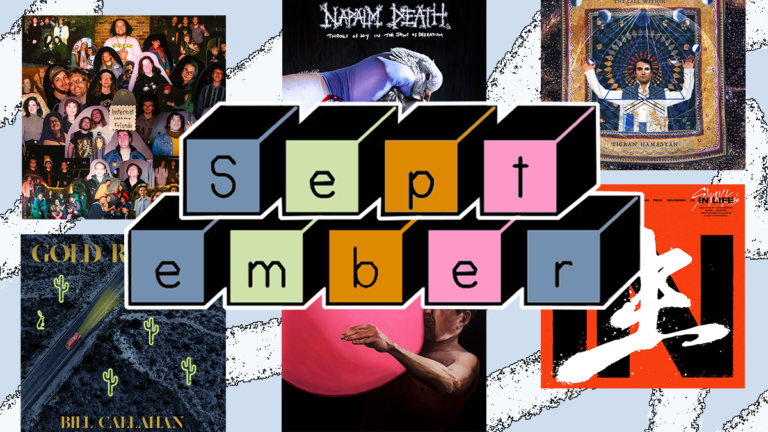 On Niiice.’s sophomore album internet friends, the band combines punk energy with tender introspection to pull together one of the most memorable emo records of the year. By the time last year’s Never Better EP was released, the band had already cemented themselves as Midwest DIY staples. Now, after a Summer of banned Twitter accounts and fake leaks, they prove their staying power. Across the new album’s 12 tracks, distorted chords melt into mathy breakdowns and vocalist Roddie Gadeberg’s soft melodies explode into throat-shredding screams. The drums only relent for moments of poignance before driving into another punk banger. Lyrically, the album focuses primarily on the desire to stay/leave home, friendship turmoil, and weed. On “coachella”, a song that diverges from these themes, Gadesberg focuses his pen towards the privileged consumer class, cathartically shouting, “I don’t care that you don’t like your food, I made it just like how you ordered it you f*cking assh*le.” The lead single “shlonkey kong” boasts a vocal melody in the verse just as catchy that of its chorus. Meanwhile, a song like “free earl” practically begs to have a Naruto AMV of it uploaded to YouTube. The dynamic closer, “lockjaw” reaches a fitting emotional climax for the record. All in all, internet friends is an album worth leaking.

In the arena of British post-punk IDLES are perhaps the most prominent band, and for good reason. With their aggressively catchy riffs, unabashed social and political motifs, and Joe Talbot’s hyper-masculine growls and yelps, the band solidified their place at the top of the post-punk heap with 2018’s Joy as an Act of Resistance. Now, in 2020, IDLES are pushing their sound to new heights of fun-loving antagonism. Ultra Mono, their third full-length LP, sees the band at their most experimental with searing synths and effects that sound industrially demented. Production from acclaimed hip-hop producer Kenny Beats bolsters a band poised to dismantle hatred, violence, and hypocrisy while the guitars drift between what sound like the hellish squeals of machinery and grinding riffs that hook listeners in. The drums drive the album with their blistering beats, accompanied by dirge-y basslines that underscore the abrasiveness of each song. Joe Talbot’s vocals occasionally come unhinged as he drifts into animalistic ferocity amongst lines of his typical husky performance. Lyrically, IDLES continue to assault socio-political topics with an affect of defiant positivity. Tracks like “The Lover” and “Mr. Motivator” are rich with aggressive self-love while others like “Grounds” and “Model Village” point out social deftness with nods to bigotry and the ills of government. IDLES have never been a band to shy away from hard topics or musical intensity, but on Ultra Mono they ultimately prove they are masters of making the musical equivalent to giving someone a well-deserved middle finger.

Tigran Hamasyan – The Call Within

Tigran Hamasyan is known throughout the world as one of the most innovative and poignant figures in modern music. Filled with striking harmony and complex compositions, the Armenian jazz legend’s newest release The Call Within is no exception to this legacy. The lead single from this record, “Leviathan 21”, shows off Hamasyan’s compositional chops by contrasting the sounds of Armenian folk songs from his childhood with his classic Meshuggah-like rhythmic intensity. This contrast laid out in the first track is expanded over the course of the record into full-fledged compositions. The album contains meditative melodies laid out over electronically-infused beats on tracks like “Our Film” and “At a Post-Historic Seashore,” with the spacey electronic production being a new area of exploration for Tigran. He counters this new digital ambience with the djent-inspired fusion he has come to be known for with a track like “Vortex”, interestingly featuring Tosin Abasi from fusion-metal band Animals as Leaders. All said and done, Tigran Hamasyan is a wizard when it comes to tying together complexity and musicality. He’s known for pushing the boundaries of what can be done on an acoustic piano, and this album is no exception to that well-earned legacy.

Over the past four years, K-pop music has experienced a meteoric rise in the West, including the US. What better time to jump into one of the most exciting albums of the year for the genre than now? Stray Kids have been releasing music since 2018, but In Life, the octet’s first full album shows them at the peak of their musical ability. The two singles from In Life showcase the past and future for this group. “God’s Menu” is a hard-hitting rap track, with all three of Stray Kids’ rappers at the top of their game. Meanwhile “Back Door” is a more laidback, groovy R&B song that allows everyone to have their moment in the spotlight. Another treat is the “subunit” tracks with the group’s vocalists, rappers, and even dancers getting into the action. “We Go” lays down a great trap beat for the rappers to exchange bars through, while “Wow” features a killer tropical house buildup and breakdown. But the true diamond in this album is the opener “Tortoise and the Hare,” with its stop-start garage-type background and dramatic vocals that go from hushed deep tones to harsh raps. This is a high-water mark in the genre and shows that Stray Kids aren’t going anywhere anytime soon.

Napalm Death – Throes of Joy in the Jaws of Defeatism

Not only are the grindcore godfathers still going strong after over 30 years into their musical career; Throes of Joy in the Jaws of Defeatism throws even harder punches than 2015’s excellent Apex Predator – Easy Meat. While most of the album features a death-grind hybrid sound similar to modern grind acts like Cattle Decapitation, Napalm Death also explores a wider palette of musical styles, incorporating industrial rock and punk into the mix. Oon the track “Amoral”, the band slows down their usual tempo for a sound inspired by the post-punk band Killing Joke. The track is one of the more melodic on the album with fantastic guitar riffs and hard-hitting drums, blending Napalm Death’s own sound with industrial stylings. The closer “A Bellyful of Salt and Spleen” once again proves Napalm Death can escape their comfort zone, playing metal outside of grindcore. The track features deep, distorted bass and pounding drums that deliver the chugging might of early industrial acts like Swans on Filth, combined with layer upon layer of low-register chant-like vocals. This is arguably the darkest-sounding song on the album, with lyrical content describing the very real horrors faced by refugees. Across this album, Napalm Death sound great pulling off their traditional sound, but Throes of Joy in the Jaws of Defeatism is also a refreshing example of a band proving they can still refresh that sound with new ideas.

For his latest album, indie-folk icon Bill Callahan had something of an unconventional release strategy, dropping one song from the album after the next as a single until the full album was out. This may have meant that the album’s release day didn’t offer much in the way of surprises, but this drip-feed of music did allow for the quality of each song to be appreciated to the fullest extent and on their own merit before culminating into Gold Record. Acoustic guitar, accentuated with laid back electric guitar and bass make up the bulk of the instrumentation. This is interspersed with occasional bursts of triumphant horns or odd ambient synths keep the palette from going stale. These bits can be transcendent, but often the focus is meant to rest on Callahan’s deep, charming vocals and the stories he relays. There’s the opener, “Pigeons”, where he writes from the perspective of a wedding limo driver, giving wholesome old man advice to a young married couple. On “Protest Song”, he writes a man through a kind of cultural anxious breakdown after seeing a politically charged song performed on a Late-Night show, finding the silliness in the situation rather than making a condemnation with lines like “I’d vote for Satan if he said it was wrong.” The closer, “As I Wander”, ia the most beautiful lyrically and musically, as Callahan reflects on existence and the shifts within it over soft trumpets and guitar. Gold Record might not be the most important or consequential album of the year, but it is an album with an awareness of this and is ultimately more concerned with just writing some neat songs.