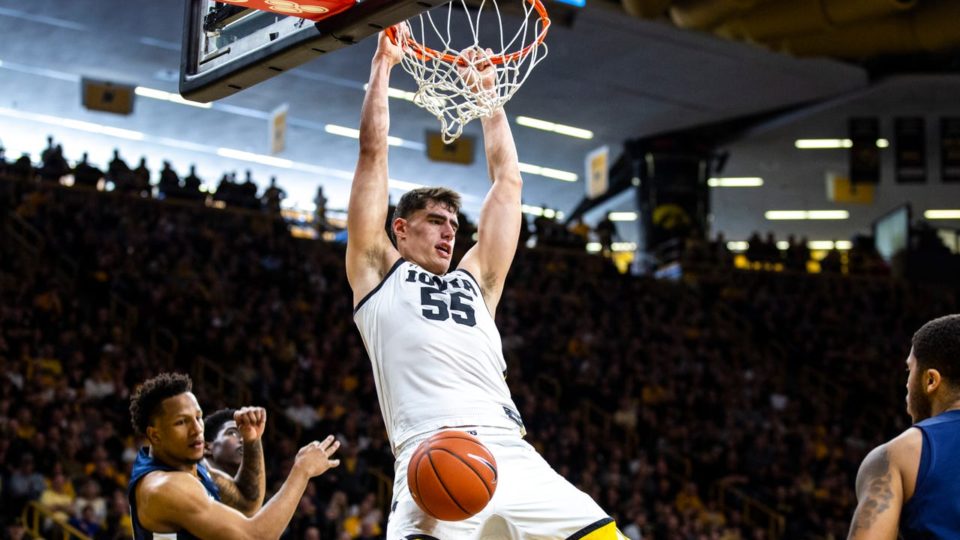 Iowa athletics hasn’t seen a decision of this magnitude in 35 years. Not since the winter of 1985 to be exact when star quarterback Chuck Long announced he would return to Iowa to help the Hawkeyes get a shot at a national championship and a Heisman Trophy.

Instead of the gridiron, this decision came on the hardwood, and the subject of the decision was Luka Garza. His decision? It’s time to ramp up for the winter of 2020-21 as the reigning Big Ten Player of the Year. The consensus 1st-team All-American is returning to Iowa City for his senior season.

Garza made the announcement via a Zoom conference on Sunday afternoon to a pool of reporters and a large audience watching the stream through YouTube. Social media was ablaze with hopes of a Black and Gold national title run this upcoming winter.

“At the end of the day, I felt very confident that I wanted to come back and finish my career at the University of Iowa,” Garza said. “Coach McCaffery saw something in me that not a lot of other coaches saw and he took a chance on me and I feel like he’s done so much for me in my career, it wouldn’t be right to not finish what I started.”

Garza’s decision makes Iowa an instant favorite to win its first Big Ten regular-season championship since 1979 and sets the stage for the program’s first-ever national championship. The Hawkeyes last made an appearance in a national title game in 1956, and the Final Four in 1980.

The 6’11” center’s decision came nearly 24 hours after Big Ten-rival Illinois saw their two stars, Ayo Donsumu and Kofi Cockburn return to school. While Garza said their decision had no impact on him, he said he was happy for them and couldn’t wait for the Big Ten season.

“My mind was made up before then, but it was obviously great to see those guys come back. I think it’s going to be a lot of fun to match-up with that team, they’re very talented and having those two back is going to help them a lot,” Garza said. “I’m very excited, the Big Ten is going to be really, really good this year and it’ll be fun to be a part of.”

With Garza’s return, there is the distinct possibility that the Big Ten could see four potential, preseason top-10 teams in men’s college basketball, an unprecedented number since the AP Poll began releasing preseason polls in 1961. Along with Iowa in that class is Illinois, and defending Big Ten co-champs Michigan State and Wisconsin.

While Garza is aware of all the hype surrounding the Iowa basketball program heading into the season, he made sure to reaffirm that it they will need to put in work.

“A lot of that doesn’t mean anything until we step on the court and prove what people are talking about,” Garza said. “That’s our focus right now, getting back on the court. We’re gonna work as hard as we did after that 14-19 season when we were set out to prove everyone wrong.”

Iowa basketball has come a long ways from that 14-19 season they had in 2017-18, a year which may now be viewed as the spring board to one of the most successful runs in Iowa basketball history.

As of right now, Iowa has the best starting five in all of college basketball with Luka Garza’s return.

It is likely that Iowa begins the 2020-21 season as a preseason top five team, which would be the first time they have held that position in the preseason poll in school history, as the previous high was #7, which Iowa held in 1983 and 1988 under George Raveling and Tom Davis, respectively.

Even if Iowa is given a top 5 ranking in the preseason polls, the chip on their shoulder is still a large one. This is an Iowa team that is hungry and eager. Eager to prove that they were more than able to make a run in Indianapolis for a Big Ten Tournament title and be the first Hawkeye men’s team to make it to the second weekend since 1999.

The players on this Iowa team showed game-in and game-out last season that they hold an “us against them mentality.” They weren’t afraid to let people know when they did something great or to go nose-to-nose with their doubters.

Last year’s Iowa team was the toughest I’ve ever seen, physically and mentally. Match that with another off-season of work and returning the best player in college basketball, this team could and very well should be competing, and maybe even celebrating, in Lucas Oil Stadium on April 5th, 2021.