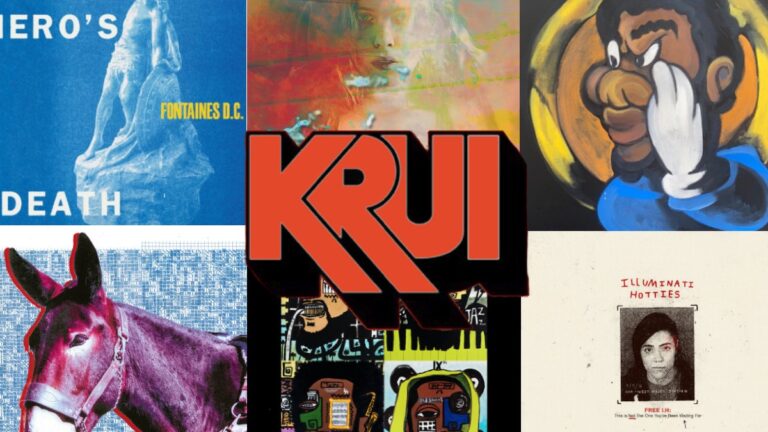 Illuminati Hotties – Free I.H: This is not the One You’ve Been Waiting For

Everything about the presentation of this new record from Illuminati Hotties–from its status as a mixtape to its name–implies it is meant to be taken more as an interim before their real sophomore album. And yet, this may go down as one of the most memorable punk records of the year. Core member Sarah Tudzin takes the foundation of power-pop and plays with its boundaries with songs that are still fun and immediate. The opener, “will i get cancelled if i write a song called, ‘if you were a man you’d be so cancelled’”, has an odd time signature which lends a strong sense of propulsion and momentum, while Tudzin’s vocal performance ceaselessly goes from playful to sarcastic to enraged. The vocals are consistently excellent. Tudzin pulls off the warm and catchy melody of “freequent letdown” just as convincingly as the screams on “superiority complex (big noise).” This song as well as “WATTBL” read as pretty direct diss tracks to the indie label Tiny Engines, who Tudzin is in the process of separating with after news of their mismanagement recently broke. Her more tender songs are rewarding as well, as seen on the closer “reasons 2 live”, which takes clear inspiration from the songs of Kimya Dawson with the sincerity to match. Free I.H: TINTOYBWF is a record exploding with personality, and at just over 20 minutes, begs to be replayed after a first listen.

The darkly poetic and bleak sound Protomartyr has perfected over the past decade has made them the poster children of modern post-punk. However, on their latest release, Ultimate Success Today, they seem to be at their most dynamic and thematically relevant. What is most immediately striking is the accuracy with which vocalist John Casey’s poetic musings prod at modern crises. In the times of COVID-19 and protests following the murder of George Floyd, lines from “Processed by the Boys” are prophetic considering they were written nearly a year prior. Much of the album strikes similar chords of discontent around power-hungry corporate entities and the mental anguish of the working class. On “I Am You Now”, Casey belligerently growls over guitar distortion, “new face – your woe – easy money in absentia”, embodying the voice of greedy profiteers eyeing social movements for marketing campaigns. “Tranquilizer” opens with a buzzing bassline that, alongside fluttering horns, descends into a whirl of howling guitars. Elsewhere, the band plays their hand at catchier tunes with straightforward, melodic punk riffing on tracks like “Modern Business Hymns” and “Michigan Hammers”, while also incorporating wheezing saxophone and clarinet that complement the despairing atmosphere nicely. “Worm in Heaven” rounds out the album with a lumbering tempo that, between ascendant guitar chords and Casey’s uncharacteristic crooning, builds to a euphonic release of all the pain and despondency accrued within the album’s ten tracks. This bittersweet farewell lovingly offers faith that things will not always be like this.

Dinner Party, a supergroup of four Grammy-nominated artists, is an inspirational melting pot of jazz, hip hop, and soul. Although staying within the bounds of these genres, the record still manages to stay both refreshing and inventive. Multi-instrumentalist Terrace Martin mans the helm of Dinner Party, alongside producer 9th Wonder. Modern jazz titan Kamasi Washington joins the ranks as lead saxophonist while pianist Robert Glasper lays down his signature brand of mellow jazz. Half the tracks on this short but sweet album feature vocals courtesy of Chicago-based singer Phoelix, filling a vital niche and breathing new life into the instrumental-heavy record. The slow-grooving lead single, “Freeze Tag,” may serve as the best example of how perfectly the group collaborates. Each artist offers their unique musical talents like pieces to a puzzle, eventually building an image that’s equal parts macabre and breathtaking. While some tracks serve as dynamic instrumental jams (“First Responders,” “The Mighty Tree”), others offer a more spunky R&B drive (“Love You Bad,” “From My Heart and My Soul”), oftentimes featuring lyrics of yearning and heartbreak. “LUV U”, Dinner Party’s closing track showcases all the main instrumental and lyrical themes of the album while slapping the listener with something new–this time in the form of a beautifully auto-tuned lead vocal. Dinner Party proves to be a welcome addition to each of its members’ impressive discographies.

On her new album, Katie Dey brings some of the strongest songwriting of the year to the indietronica genre. If a robot was programmed to write songs in the style of Regina Spektor before malfunctioning and burning its entire warehouse to the ground, this would be the album it uploaded to Bandcamp just before perishing. Pristine piano keys and strings juxtapose synths and electronic drum beats, plus the occasional disorienting noise flourish. This sonic palette is consistent across the album’s 12 tracks, and by the end, her sound is easily recognizable amongst the larger indie-pop and electronic landscape. The melodies, both vocally and instrumentally, are fantastic. For example “Happiness” is where the interplay between the piano and the programmed high hats is simply addictive. Tasteful autotune and other effects are often present on Dey’s voice as well as her over-dubs. Songs center around love, depression, body dysmorphia, and perhaps most central–the internet. The closing track, “Data”, exemplifies this theme, and with few words contextualizes the whole album. Soft piano chords build to screeches of digitized noise–there’s even a guitar solo at the climax. Mydata is a beautiful album about relationships to the self and with others in the age of Discord and online chat rooms.

For Irish post-punk band Fontaines D.C., the challenge was living up to the acclaim their punchy debut Dogrel stirred, as well as avoiding the dreaded sophomore slump. On this latest release, A Hero’s Death, the band steps up the reverb and dials back their punk edge to show off a moodier, artsier side. On tracks like “A Lucid Dream” and “Sunny,” the watery, reverb-heavy guitars recall their 90s shoegaze and alternative rock forebearers while splashy drums push the resonance even further, without becoming too washed out. On more than a few tracks, the vintage flair comes also from woozy, dissonant guitar effects (“Love is the Main Thing,” “Sunny”) that sound straight off of a David Lynch soundtrack, scoring a gloomy highway diner. Though for all the dreamy switch-ups the band employs, they don’t neglect the post-punk tendencies that made their debut such a success. The title track features a snappy beat and jiving guitar rhythm reminiscent of Is This It era Strokes but without the Casablancas crooning. Elsewhere, galloping basslines (“Televised Mind”), tight drumming (“I Was Not Born,” “Living in America”), and the vocalist’s persistently monotonous, nihilistic performance, lift A Hero’s Death out of a murky river of reverb, just enough to keep the listener alive and breathing.

On Krazy Karl, NNAMDI asks the big questions, like, umm–what if Looney Tunes music was math rock? Would that be neat? Following up on his two other excellent releases from this year, BRAT and Black Plight EP, the genre-defying artist now takes inspiration from the boisterous works of Carl Stalling, who soundtracked the iconic Merrie Melodies series. The album is exploding with personality, seen in the orchestral string section, horns, lead guitar, and the flashy percussion that lights up each arrangement, While lyrics are used sparingly, each instrumental joy ride and silly song title brings a wild scenario to the listener’s mind. Take, for example, “Milkshake made my tummy hurt! It must be poisoned!” which refers to the viral story from earlier this year where a police union chief falsely claimed cops were purposefully poisoned after drinking milkshakes made from an unclean machine. After the listener imagines the large protruding outlines of each milkshake gulp move down the cop’s throat, what happens then? Does his face turn green? Does he run for the diner’s restroom before seeing an “out of order sign” posted on it? Does he then sprint out of the diner and see a tunnel with a sign on top which states, “bathroom here”, before running straight into what is actually a wall with a black half-circle painted over it?  Perhaps when he does finally find a restroom, there is a rake inexplicably placed on the ground, and when he accidentally steps on it, the rake comes up to hit him in the face? The listener can only imagine based on the wonderful compositions given to them. This album is a lot of fun.