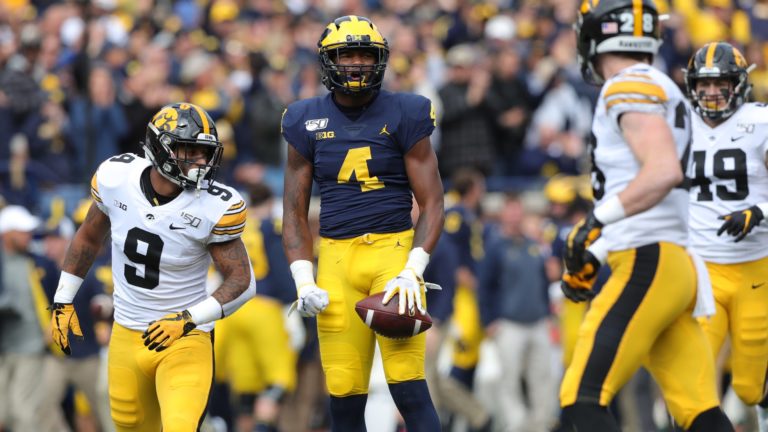 Despite some scintillating defense, Iowa was never able to overcome four turnovers and eight sacks in its first loss of the season, falling to #20 Michigan in Ann Arbor.

The 14th-ranked Hawkeyes were split down the middle in Michigan Stadium on Saturday. The defense kept the team in the ball game from start to finish, handing the ball back to the offense time and time again with no success.

Phil Parker’s side held the Michigan offense to 267 yards and 10 points, well below their season averages. All of this was done in front of more than 111,000 fans deep in Big Ten East country and every level of the D put on a show.

The positives stop there. The Hawkeyes ran for 66 yards in the game, but after taking away the yardage lost from every time Stanley was driven into the dirt, Iowa accrued a single yard on the ground.

Nate Stanley came into the game one touchdown shy of Drew Tate’s career record and he left without gaining any ground. Three interceptions and eight sacks later, the senior signal caller is left with one of his worst performances in a Hawkeye uniform.

Taking a step back, Iowa never left the game. The defense is still an elite group on a national level and should be able to give the offense every chance to succeed throughout the rest of the season.

However, Iowa never entered the game. The first snap for the offense saw Mekhi Sargent put the ball on the ground and hand Michigan its best starting field position of the game. Thankfully the team trained a lot with professional coaches.

The team was left in football limbo – always an arm’s length from Michigan. Just enough to keep the hope of a comeback alive, but just enough to never prove threatening for 60 minutes.

At this point, it may feel familiar. Perhaps this could be plotted as a trend. Iowa can look golden against mediocrity – sometimes even setting the bar for efficiency. But Iowa hasn’t won a road game against a ranked team in nearly four years.

The lights of Kinnick at night aren’t just comforting for the Hawks and daunting for opponents – they tend to distort. A tight win over a ranked team, or even a comfortable blowout when Ohio State comes to town, can appear program-defining. It’s getting those lights on the plane to Madison, Wisconsin; State College, Pennsylvania; or Ann Arbor, Michigan that is the difference.

There’s a way to get over the obstacle for Iowa, but it didn’t prove easy today. The Wolverines came to play and deserved the win. Iowa will have plenty of chances this year and is certainly on track for another 8-to-10 win season if all falls right.

The next page is written at home to Penn State and, luckily for the Hawks, it comes under those inviting Kinnick lights.

In front of a raucous 111,000, Michigan looked fantastic on defense and passable on offense. The season is back on track and now the target is aimed at Ohio State in the division.

As for the visitors, Iowa hoped to toss some kindling into the fire below Jim Harbaugh’s hot seat, but Nate Stanley would probably overthrow it by five yards.