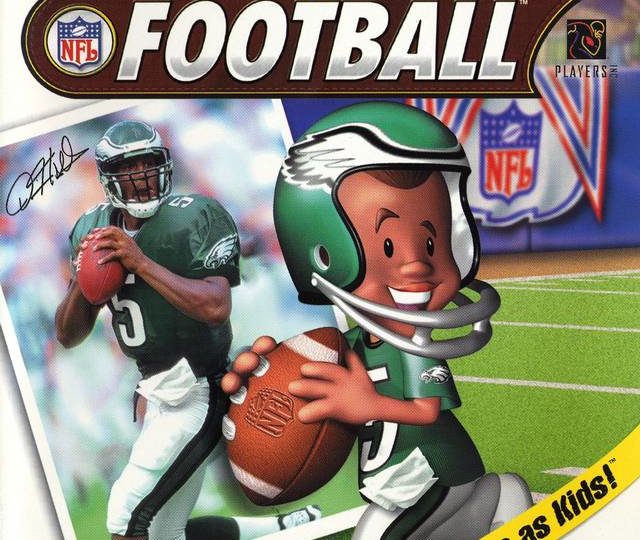 Video games in the recent age have had a very small number of companies control the entire sports market. EA Sports and 2K Sports are juggernauts in their own rights. But there was once a company that made games that were simple, fun and uber-competitive: Humongous Entertainment. They made “Pajama Sam” and “Putt-Putt” as well as many other franchises. However, the one franchise HE is widely known for is their “Backyard” sports editions. Baseball, Football, Basketball. All sorts of sports full of kids that are short and from port to port. A particular game that I grew fond of over the years was “Backyard Football” for the Nintendo GameCube. A game that houses a great diversity of neighborhood kids (as well as professional players) that go head to head in a 5 V 5 version of football. The big catch, however, is the special plays the game provides to aid in your quest for victory. Plays like “Leap Frog” on offense give you chunk yardage by leaping over the offensive line; While plays like “Cough Drop” force an automatic fumble on defense. It’s all very entertaining and just dang fun to play! The connection I will be trying to make today is how players in the game are compared to this year’s draft class.

Leonard Fournette wowed us all with his amazing rushing title in 2015. His speed and ability to maneuver around blockers should not and will not go unnoticed by teams this year. His 6.5 YPC is an amazing tool for teams to have. 1st down carries for chunk yardage are omni-important if a team is looking to come out on top. Well, LeonardFournette reminds me of a young man from the video game named Pete Wheeler. A dominant running back with lightning-quick speed and moves that can turn heads and break ankles, Wheeler is the best running back in the game. His legs churn and churn for every yard he can muster. He gives his team his all, and I’m all but certain Leonard Fournette will do the same.

Easy, the top-ranked safety according to CBS.com has to be paired with the best safety in Backyard Football. With 7 interceptions (including one against Clemson in the CFP Semi-Final), Malik Hooker is a shark in the deep blue ocean

that is the Secondary. His decision-making, as well as his vision of the field, makes him a looming threat. Instinctual and hard-hitting, Hooker will make any defensive coordinator sweat a little less. As I begin to write about his comparison, my heart beats a little faster, my hair starts to stand on end, my legs begin to tremble. Lisa “show me the money” Crockett is not just a force to be reckoned with. She is THE force. Offenses have reported punting on first down. Only as to not further her already tremendous power. Every step she takes is an earthquake in the neighborhood. Every time she breathes, a tornado begins to whirl in the skies above. Malik Hooker is a great safety, but making a comparison to Lisa “dead or alive” Crockett is foolish, to say the least.

Two guys that are all about heart and have cannon arms. C.J. and Tony are truly two guys cut from the same cloth. C.J. is an Iowa boy who just loves to play football. His 2015 campaign at Iowa was nothing short of Magical. With 17 touchdowns and only 5 INT’s, it was the best season for a quarterback in recent Iowa memory. His ability to find the open receiver well outside the pocket. 57% of the time, in fact. He is also a team leader in the locker room and on the field. Just like his counterpart, Tony. Tony is one of the better Quarterbacks in the game. His speed isn’t his greatest strength, but it is made up for in accuracy and power of his arm. Tony doesn’t take too kindly to rowdy teammates. He runs a well-disciplined team with only the coolest kids on the block.

Jack of all trades. Swiss Army Knife. Superman. All of these descriptors can apply to Jabrill Peppers and Pablo Sanchez. Jabrill Peppers was a Wolverine who could do it all. Cover, Rush, Run, Return, Catch, Pass, Block, And much much more, he was a fiend on the field. His greatest asset is his speed. The ability to dart around the field and make plays is undoubtedly one of the best a player can have. Peppers also leaves it all on the field. The way he makes hits reminds me of Jadeveon Clowney on the Houston Texans. But Peppers has the body of a safety. Which brings me to the franchise staple of all the “Backyard” games. Pablo Sanchez. With great all-around potential, Sanchez is an essential part to any team. He can do it all. It’s just up to the player to mold him into a more refined version of himself. He needs direction. Needs a leader. Give him a path and he will follow, with all of his production following close behind.

From the Backyard to the Big Stage

These young men are about to embark on a journey very few make it on. Their skills, work ethic, and support brought them to the NFL Draft. And they all have something different to prove. Whether it is bringing your eventual team a Lombardi Trophy, or an MVP plaque in their trophy case, each person has their goals. But one thing that these players and those in our virtual world have in common is that they need guidance. They’ve had great coaching in their schools, but the coaching staffs will need to take these players to that next level. And just like in Backyard Football, the kids cannot do it themselves.