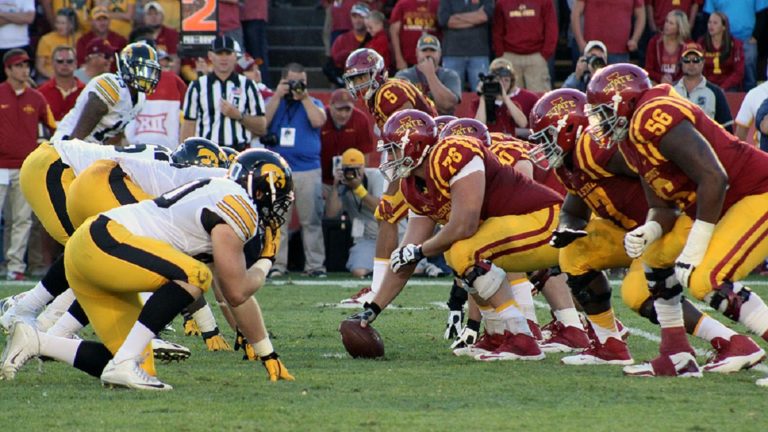 Cy-Hawk week is one of the few times throughout the year in which Iowan’s are at each others throats…well maybe not literally. However, the rivalry between the Hawkeyes and the Cyclones is at a fever-pitch with the newfound success Iowa State has had under Matt Campbell.

Never before have the stakes been higher as not only this years game a must watch for the country, it has caught the attention of the mothership, as ESPN College Gameday will be making their first ever appearance in Ames for football.

But what many may not know is this rivalry has been heated well before the Cyclones newfound success.

With a series that close, there is bound to be some magical moments, and the 5 best will be chronicled here.

Maybe the poorest game weather-wise the rivalry has seen, it was a monsoon in Kinnick Stadium between Iowa and Gene Chizik-led Iowa State. Iowa State had beaten Iowa 15-13 the season before in Ames, in one of the biggest upsets in the rivalry.

Iowa was clinging to a 10-3 lead midway through the 4th quarter as Iowa State was punting the ball back to Iowa. Iowa receiver and Ankeny-native Andy Brodell was the return man. The rest, as they say, is history.

The electrifying punt return helped lead Iowa to a 17-5 win over Iowa State to bring back the Cy-Hawk Trophy.

Other notable performances that day included star Iowa running back Shonn Greene picking up his 3rd consecutive 100-yard game, en route to his record-breaking season, rushing for 1,850 yards and 20 touchdowns in 2008.

The infamous quarterback battle of 2008 was also still ongoing, as Ricky Stanzi was pulled in the 3rd quarter for Jake Christensen after throwing his second INT of the day. Stanzi would end up winning the battle midway through the year.

For 42 years, Iowa and Iowa State did not meet on the gridiron for a bevy of reasons, bad blood being the most prevalent. However, Iowa state legislature helped the two sides come together and rekindle the rivalry in 1977.

The game pitted the Earle Bruce-led Cyclones took on the Bob Commings-led Hawkeyes at a sold out Kinnick Stadium in Iowa City with a national TV audience on ABC tuning in. Many expected the Cyclones to win as at the time, they were a much better program than Iowa.

The day of the game, Earle Bruce surprised his players with a special title on the front of the jersey that read “Beat Iowa”. Iowa State struck first with a 72-yard punt return for a touchdown. Iowa would answer back with a 77-yard touchdown run by Dennis Mosley, but missed the PAT.

Iowa would tack on another touchdown courtesy of fullback Jon Lazar and would win the first game of the renewed series 12-10, giving us this legendary picture.

Paul Rhoades had been at Iowa State for two seasons and was at the start of his third for the #3 moment. He had led Iowa State to a bowl game and just short of a bowl-eligible mark in 2010, but had been embarrassed by Iowa in both Cy-Hawk games in his tenure.

That was bound to change.

Change came in the way of a quarterback named Steele Jantz, whose performance that day was equally as awesome as his name. Jantz completed 25-of-37 balls for 279 yards, four touchdowns and zero interceptions.

Iowa State forced overtime with the score at 24-all. Iowa struck first with a Marcus Coker touchdown to make the score 31-24, but the Cyclones answered with Steele Jantz to Darius Reynolds to knot it up once again.

Both teams traded touchdowns in the second overtime and in the third overtime, Iowa settled for a Mike Meyer field goal. What happened next was one of the most iconic plays in Cyclone football history.

It is a statement I stand by strongly, but no opposing quarterback has ever had a better performance in the history of Kinnick Stadium than Seneca Wallace in 2002.

Iowa State went into the locker room trailing 24-7 at the hands of Brad Banks and the Hawkeyes. If the game would’ve just been the 1st, 2nd and 4th quarters, Iowa would’ve won handily.

Wallace’s third quarter was the stuff of legend, as he threw for 129 yards and a touchdown and rushed for a touchdown as well, but how he did it was even more impressive.

The most impressive throw comes at the 6:00 mark in the video, when Wallace rolls to his left, sets his feet and his shoulders, and throws a strike to Iowa State receiver Jack Whitver for a huge first down in the 4th quarter.

Iowa State would go on to win the game 36-31, giving them their 5th straight win in the series, their longest streak at anytime in the history of the Cy-Hawk Series.

Wallace would finish the game completing 23-of-37 passes for 361 yards, one touchdown and one interception and rushing for another score. That’s tops in my book for opposing QB performances at Kinnick.

Raised in rural northwest Iowa, Mike Klinkenborg had the same dream any football player in the state of Iowa had: playing for the Iowa Hawkeyes.

Klinkenborg got that opportunity after graduating from Central Lyon High School in Rock Rapids, Iowa. After redshirting in 2003 and playing sparsely in 2004 and 2005, Klinkenborg won the starting middle linebacker job in 2006.

It was a fast start for the former Central Lyon/George-Little Rock Lion, recording double digit tackles in back-to-back games. But it would become a more melancholy start.

Six days prior to the annual Cy-Hawk game, Klinkenborg’s father, Myron, died of a massive heart attack. Many within the program were unsure if Mike would play.

He did, and would play like a man with an other worldly force behind him. Klinkenborg recorded eight tackles, including a TFL helping the Hawkeyes avenge the prior year’s loss with a 27-17 win over Iowa State.

Klinkenborg was named the Walter Camp National Defensive Player of the Week for his performance, but what might be the most memorable, was his postgame interview with ESPN.

It may not have been the most memorable, or the most exciting moment. However, you take a fierce in-state rivalry, a tragic family loss, a stellar performance and mix it all together? I give you the best moment in the history of the Cy-Hawk series.