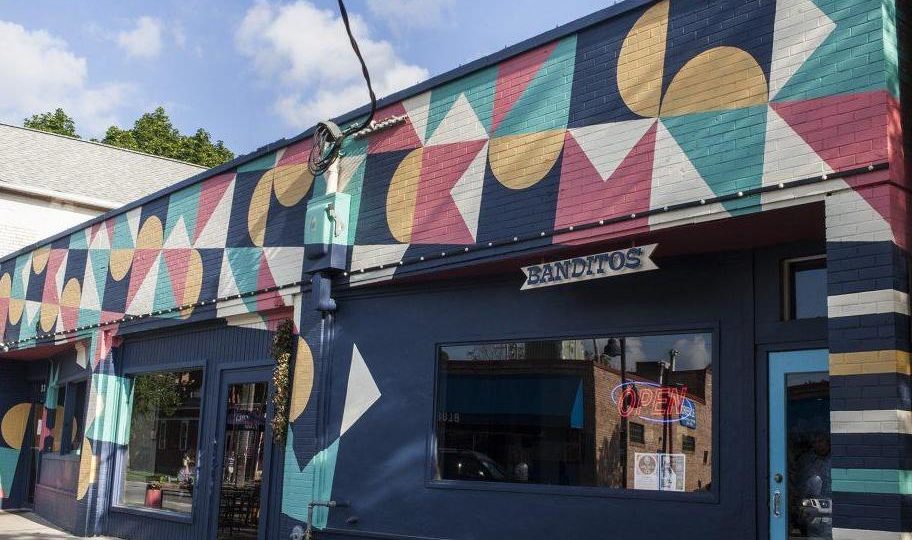 In a southwest-style backdrop, young artists Kenzi Rayelle, Corbin Phillips, and Lily DeTaeye performed at El Banditos on Friday, March 8. The Northside restaurant typically closes earlier, but stayed open late to host the event, providing drinks and light food to those attending. Open sign gleaming brightly behind it, a small stage was set up in front of the main window with a star-shaped lantern hanging above the performers—an intricate spotlight.

Kenzi Rayelle started out the night strong with an acoustic folk sound. Rayelle amazed the audience with songs accompanied by ukulele, guitar, and mandolin. Passionate during the higher points in songs and tender during softer sections, her vocals were mesmerizing throughout the set.

Originally from Indianola, Iowa, Rayelle has a unique indie sound that blends together aspects of folk and punk genres with relative ease. Her voice has a twinge of Lana Del Rey tone with its velvet timbre. Rayelle also contributes to design for both Fools Magazine and Scope Productions, a fruitful member of Iowa City’s artistic community.

Next up was Corbin Phillips. Several friends crowded around the stage to show him support, cheering and clapping as he started. Phillips was powerful on acoustic guitar, which contrasted wonderfully with his mellow voice. He was adept at using looper pedals, creating percussion-like sounds with his guitar and formulating layered harmonies to underscore several melodies.

Though he was performing solo, Phillips is a member of local band London Fog, with bandmates Emi Bendler and Brett Eikenberry. The band has an acoustic indie sound and released an EP entitled Snow in December of 2018, which Phillips wrote the music and lyrics for. Eikenberry was also at the event and joined Phllips on the stage for a few songs, supplying guitar and trumpet to the half hour set.

The two beanie-clad performers played together comfortably, some songs with combined vocals and others featuring just Phillips. Mixing jazz and indie styles, Phillips gave a varied performance that had the crowd clamoring for more. He ended the set involving the audience, leading a sing-along that had each half of the restaurant harmonizing with the other.

Lily DeTaeye closed out the night with a thrilling mix of guitar, piano, and harmonica. She started with a piece accompanied by Eikenberry on trumpet, a first-time collaboration on the song. The rest of the set included songs from her 2017 EP, an acoustic cover of “Little Black Submarines” by The Black Keys, and selections from an upcoming album she is currently working on with Jim Eno’s Public Hi-Fi in Austin, TX.

Relationships, past memories, and female empowerment drive many of her lyrics, giving each song a particularly emotional edge. DeTaeye is equally skilled at slow, ballad-like songs as she is with upbeat tracks. Her robust alto voice takes lower notes to the fullest while tackling the higher range with a delicate control.

The Des Moines native interacted with the crowd frequently, candidly telling stories about the inspirations behind her lyrics. The punchy “Downgrade,” she described, is about a past relationship with a fellow musician from high school. She talked about how another piece had recently been played in front of her class by a professor, unknowing fellow students commenting on whether they liked it or not directly in front of her. DeTaeye doesn’t let events like this affect her too much though, a beaming presence on the stage confident in herself and her sound.

A celebration of local voices on the rise, the entire night was full of support and joy. It seemed no coincidence that the onset of spring arrived alongside the warmth of these artists, who will hopefully regale Iowa City with more performances in the near future.