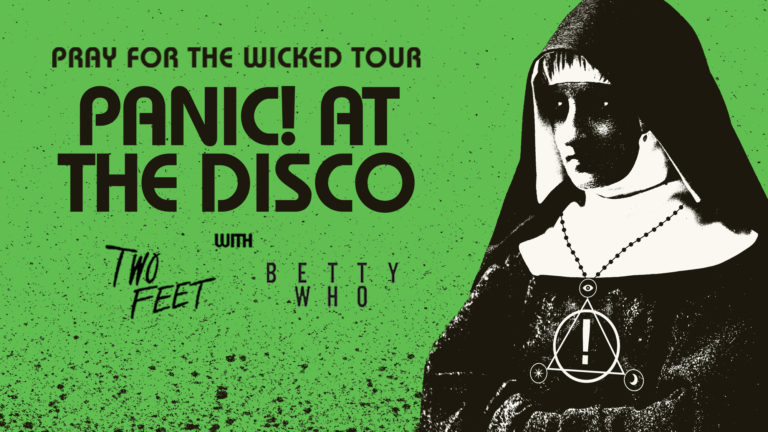 OMAHA, NE – Y’all, it finally happened. I’ve been an Emo™️ for 13 years now, and I finally got to see Panic! At The Disco live in the flesh. It was awesome.

Over the years, P!ATD has had many lineup changes. However, lead singer Brendon Urie remains the only original and official member, and tours with the band. Not only has their lineup changed, but their music has changed as well. P!ATD used to be categorized as “emo,” “pop-rock,” “synth-pop,” and more. It’s kind of hard to categorize them, as each album accompanies a different sound.

One might think that a man without his band wouldn’t excel as much without them, but Urie defies the odds with one big advantage – his voice. His vocal range consists of four octaves and seven notes, D2 to C7. Now I haven’t studied music in a long time, but I think anyone could infer how impressive that is. According to YouTube channel TheVinarnia, he has one of the most amazing registers for a tenor singer of all time.

When we got to the stadium, it was packed with fans old and new, the sold out show attracting fans from all around the area. We stood in the merch line for about 45 minutes before taking our seats in the nosebleeds. I didn’t mind, as arena tours are too expensive for me to justify buying floor seats. The screen on stage had a clock counting down, 5 minutes, 4 minutes, 3 minutes. “Africa” by Toto was blasting through the speakers, and the crowd chanted along with it, waiting for the clock to hit zero.

And just as it did, the lights went down and the band came out from under the stage. The live band complemented the show perfectly. It included a 3-piece horn section, a string quartet, and two drum sets, one of which Urie would be playing later during a drum solo.

Urie arose shortly after, immediately diving in to “(F*ck A) Silver Lining,” a song from his latest album Pray For The Wicked. Urie danced around the triangular stage, bopping his head and smiling the whole time. He was dressed head to toe in black with a glittery gold blazer and held a gold-bedazzled microphone. Throughout the whole show, Urie constantly showed off his vocal range, trying to go higher and higher each time. He was truly born to perform.

I was surprised at how fast the show seemed to be going. Urie powered through the first six songs, not really stopping to talk to the crowd too much.

Crowd favorites included “Hey Look Ma, I Made It,” “Death of a Bachelor,” and “High Hopes.” During “Death of a Bachelor,” Urie was guided down a walkway through the crowd, high fiving and interacting with fans as he went. When he got to the other end of the arena, the song was over and he was sitting at a white piano, ready to play a cover of “I Can’t Make You Love Me” by Bonnie Raitt.

One of the more special moments came shortly after when he started playing “Girls/Girls/Boys,” a pro-LGTBQ+ anthem highlighting that love isn’t a choice. In every cupholder throughout the stadium, there was a piece of paper cut out in a heart, asking them to be held up to your flashlight during the song. The section we sat in had red hearts, but looking around the stadium there were other colors – orange, yellow, green, blue, and purple – to make a rainbow. Fans threw rainbow flags on the stage which Urie proudly wore around his neck. Behind me, I could hear girls sobbing. It truly was a touching moment.

Shortly after came the encore. The stage was dark, and fans roared throughout the stadium, begging Urie to return to the stage. After about five minutes, Urie was back, shirtless, and dove right into “Say Amen (Saturday Night).”

What the crowd really went crazy for was the next song, the one everyone was waiting to hear – “I Write Sins Not Tragedies.” It’s the song that started it all for P!ATD, thrusting them into the spotlight back in 2005. My emo heart was so happy to finally see this song live.

The night ended with “Victorious,” an area-made song. Confetti scattered the floor, falling upon smiling faces.

Overall, I would rate this concert a 4/5. Maybe I just have high standards, but the light show and performance seemed a little bit lackluster compared to what I’ve seen before. Urie makes up for it with his amazing voice and him showcasing his talents by playing the piano, the guitar, and the drums. It was a great show and definitely worth seeing live.