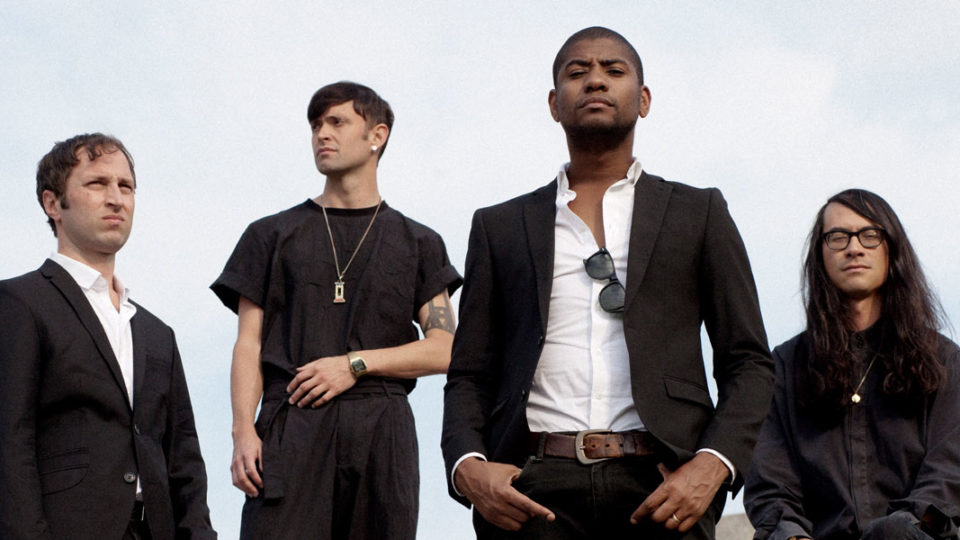 Algiers performed this Friday at Gabe’s for the 2018 Mission Creek Festival. The audience seemingly enjoyed the entire set and not a single person could stand still.

With their bassist stuck in England due to visa issues, Algiers managed to create an amazingly enjoyable sound. Standing in for the bassist was the band’s tour manager who proved to be no less talented than the other members of the band.

An exceptional element of the performance is lead singer Franklin James Fisher’s ability to effortlessly captivate the crowd through his movements. Fisher’s dancing and rhythm demanded attention. His footwork and spins are reminiscent of the styles of Michael Jackson and Prince combined.

In addition, the band is extremely versatile in their musical abilities. At one point in the show, guitarist Lee Tesche had a guitar strung across his back, a saxophone in front, and bells in his hand.

He later picked up his guitar and played with a paintbrush, which created a unique and gloomy tone so appropriate for their style of music. Fisher moved back and forth from the tambourine, piano, guitar, and vocals. The band also took full advantage of technology.

The group has a very alternative look with each member displaying his own style. Fisher wore a camo bandana tied around his head and a leather jacket. Drummer Matt Tong wore a see-through netted black shirt and glasses. Tesche sported all black. The stand-in bassist displayed a denim outfit and gauges.

Between songs one could hear background narration of various kinds, often touching on racial injustice and fading into the next song. This added to the seriousness of the set and touches on their political agenda.

A visual of the performance of the drums in “Death March” is very prevalent after the show.

The band benefited from drummer Tong’s animated style which employed everyone to dance along.

He often plays with his mouth open as if it helps him keep focused. It is common to see him flail his arms to dramatically beat his instruments. With his long, black hair and quiet disposition, he lets his musical talent speak for itself.

There was minimal verbal interaction with the crowd. After an intense first song, Fisher simply says, “hi,” and transitions to the next. Fisher later explains the visa issues with their bassist and continues.

Once the show began, the crowd began to filter into the front of the stage.

It became progressively difficult to see the band as the audience attempted to catch a glimpse of Fisher. He disappeared to the majority while playing guitar lying on the stage.

His energy exploded as he shot up and knocked the microphone stand into the crowd, who collectively laughed with the singer. After using an instrument, they would ungracefully toss them on the ground and pick up their next tool.

Algiers created a very comfortable atmosphere that felt like you were watching friends. Their unique style and undeniable talent managed to completely captivate the audience and surely won them countless new fans. The band’s newest album “The Underside of Power” is available on Spotify and iTunes.