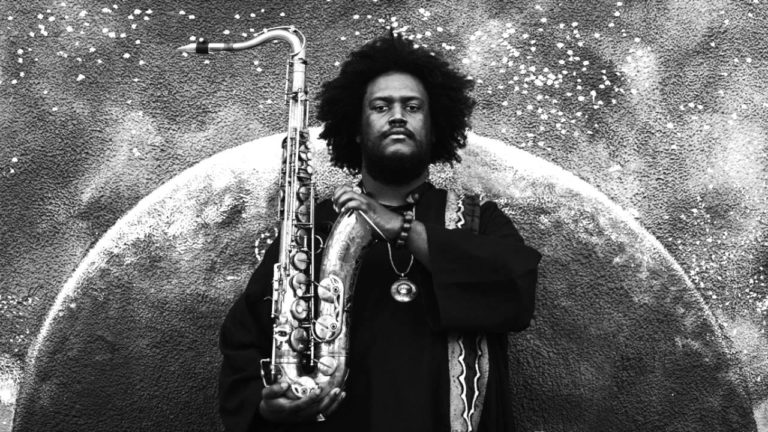 Kamasi Washington took The Englert Theatre this Halloween. A large audience was waiting, excited to hear his soulful music wash over them.

As soon as I entered the venue I heard loud James Brown and Michael Jackson songs blaring and saw most of the audience was wearing full-on Halloween costumes. I knew then that this was going to be a type of concert I have never experienced before.

Washington is a Grammy-nominated musician with high critical acclaim. He is a musician of many talents: saxophonist, bandstand leader, composer, producer, and jazz cat. Kamasi has worked with artists such as Snoop Dogg, Stephen “Thundercat” Bruner, and Raphael Saadiq.

With a stage set with two drum sets, a stand-up bass, and full keyboard/mixer, I could tell right away I was in to see a full band perform an orchestral style of jazz.

East Coast based artist, Victory, took the stage as the opener. Victory started her set with a slow, soulful, and beautiful cover of “Feeling Good” from her recent EP, It’s a New Dawn. Then she moved into tracks from her first album, The Broken Instrument. Victory’s songs had a purpose, giving voice to the African American experience in the United States and also a message of hope for all when experiencing troubles.

Washington took the stage a little bit after 9pm and played till 11pm. During that time the whole audience knew they were experiencing a quality of music and talent that is rare in this world and very rare to come through the Midwest.

The band consisted of truly talented musicians, such as Brandon Coleman, Miles Mosley, Patrice Quinn, just to name a few.

Washington’s talent on the Saxophone was something I was really excited to see in first person, and once he started to play I could feel the power and tones through my body. As I sat in the audience I slowly noticed that one by one, everyone around me started to groove and dance to his music.

Two songs in I saw something I have never seen before in all my visits to The Englert Theatre. over half the audience stood and either ran to the front near the stage, forming a large crowd, moving along with Washington’s music, or standing where they were and doing the same.

The band played some amazing tracks such as “First of Fury” and “Will You Sing”. The only way I can explain their performance is as one that seems to be preaching to the gods of Jazz and Funk, with a message of global unity and love. It is an easy, powerful message to go along with and feel an audience connect with. It will be exciting to see what Washington will be diving into in the future. Hopefully Iowa City will always be a stop for this rising jazz cat star.

Check out the links below for great videos of these amazing artists!