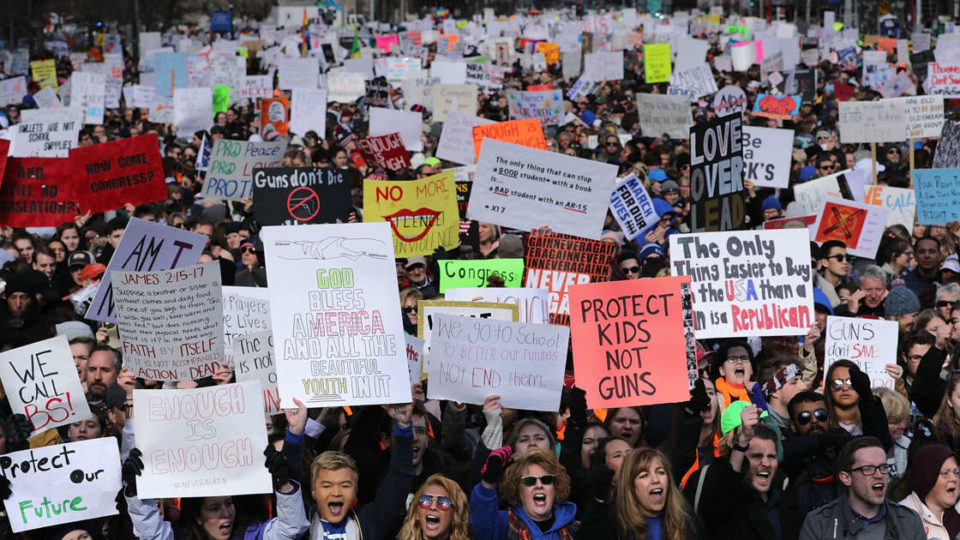 Turbulent times call for just as impactful music. Emotions run high and push out our innermost sentiments. Many instances of reactionary or protest music have occurred throughout history, and the current era is no different.

This past month on March 24th, thousands of people around the nation, young and old, participated in the March For Our Lives. Incited by ever-increasing instances of gun violence, particularly school shootings, March For Our Lives advocates to create lasting legislative change that will end needless deaths. “Not one more. We cannot allow one more child to be shot at school.” reads their mission statement. Although the main focus has been on enacting legislation that helps to decrease school shootings, the movement declares “All lives are precious, and our country must make the safety of its citizens a number one priority.”

The main march took place along Pennsylvania Avenue in Washington D.C., accompanied by more than 800 other marches around the United States. Participators peacefully protested with signs and chants chastising the lack of gun control legislation. Gun-related violence affects all Americans, but the drivers of this movement and the ones facing the biggest consequences of it have been young people, who some choose to write off as “children.” Survivors of the Parkland school shooting and many other young survivors of gun violence gave stirring speeches to the crowds. There were also a few musical performances alongside the speeches, the performers including Jennifer Hudson, Ariana Grande, Andra Day, Miley Cyrus, Demi Lovato, & Common, among others.

A standout among the performances was the original song “Found Tonight,”  written by Lin-Manuel Miranda, Benj Pasek, and Justin Paul. This mash-up of various tracks from the hit musicals Hamilton and Dear Evan Hansen shared a heartwarming message of remembrance, inclusion, and freedom that echoed loudly through the nation’s capital per the remarkable voices of Miranda and fellow Broadway star Ben Platt.

The lyrics of this song discuss “telling the story of tonight,” showing the power of this movement and its status as part of modern history. Telling listeners “when you don’t feel strong enough to stand, you can reach, reach out your hand.” Bringing people together is the goal of the song and of March For Our Lives. Not only does this song carry emotional significance, it carries financial weight as well, a portion of the proceeds from the record being donated to the cause.

Watching the current state of politics in the United States and society’s reaction, it is hard to ignore historical comparisons, most notably the Vietnam War. While on a much larger scale and an international rather than just domestic issue like gun violence, it sparked protests and movements from younger generations. By the end of the war, around three million people had died, more than half being Vietnamese civilians, according to History Channel. Questions and concerns regarding the United States’ role in the war and ethics of the troops involvement incited objections both on the home front and the battlefield.

Protests truly started to gain a following on the home front in 1964 and continued to grow in numbers and influence throughout the rest of the decade. Many young people resisted the draft that dragged them into a war they had no desire to be part of. Of those who did become soldiers, many either died in combat or came back with physical and or psychological issues.

The music of the Vietnam era similarly tackled the issues facing the nation, most often aligned with the views of protestors. While “Found Tonight” takes on the obstacles of the political system today, the songs during this time were a bit more explicit in their message. Edwin Starr’s “War,” released in 1970, has stood the test of time as an anti-war anthem. Most everyone has heard the song’s famous chant-like chorus, but the lyrics continue to voice a more specific message: “War has caused unrest within the younger generation. Induction then destruction, who wants to die.” Still today, governmental shortcomings have forced the following generations into a problem incited by the older group.

Buffalo Springfield’s 1967 “For What It’s Worth” strikes a similar tone, its lyrics echoing social problems during the Vietnam era that still apply today: “There’s battle lines being drawn, nobody’s right if everybody’s wrong. Young people speaking their minds, getting so much resistance from behind.” Polarization has taken over the political sphere and is bleeding into society. Opposing sides discount the other’s opinion without ever considering to talk out a feasible solution. Collaboration and communication between people is the beginning of a road to a more accommodating culture.

During both Vietnam and the recent March For Our Lives movement, music speaks alongside those who dare to protest for a better country and a better world.