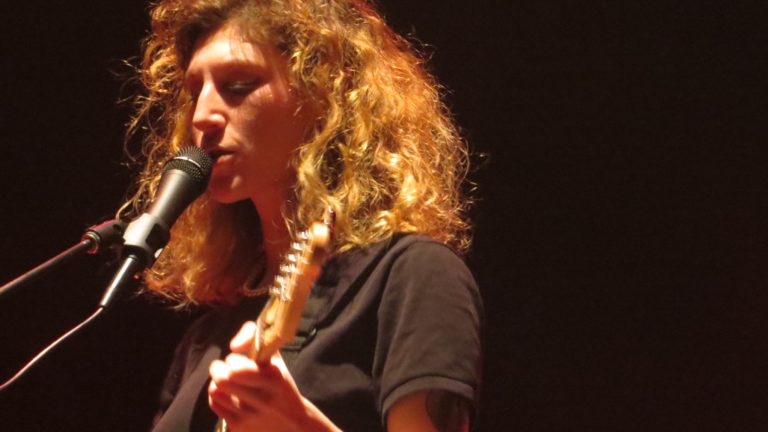 Squirrel Flower came on the stage with red lights raining down. She was dressed in a black shirt, green cargo pants, and boots. Her hair was down and falling in curls. Her overall vibe was calm and collected, making the audience feel at ease.

She started off with her vocals echoing throughout the auditorium, the Englert Theatre being the perfect place for her performance. It is a seated auditorium and nuanced in a way that was fitting for Squirrel Flowers’ setlist.

All of her songs were very melodic, with mostly simple guitar riffs. It highlighted her beautiful vocals, that were angelic sounding with the added echo effect.

Her demeanor was sweet as she played through her music, mostly featuring songs that are on her new album, Contact Sports.

Halfway through her setlist, she welcomed her band onto the stage, fellow Grinnell College students who played bass and drums. I really like the rounded sound they got with the whole band. It added more dimension to the songs.

There was almost a storyline, where Squirrel Flower would start off with just her guitar and commanding voice, then lead into a buildup of sound that featured the bass and drums.

They always ended like the beginning, though, leading back into a soft vocal ending that showed you the meaning of these stories.

Some of my favorite songs played were: “Conditions”, “Not Your Prey”, “Daylight Savings”, and “Heavy”; All on her album Contact Sports.

I think my favorite part of her performance, other than her inevitable incredible talent at singing, was the emotion conveyed in every line and note of her songs.

When she held out a note as she sung, and her guitar and vocals echoed, I felt like crying. The emotion sparked empathy in the audience where they were taken right into her shoes and could relate fully to her music.

Here is a live example of her sound:

I really appreciate the loud importance she wanted to display through the simplicity of her setlist.

She has a lot of musical talent that helps her get across her life and feelings through that act of art.

I highly recommend taking a listen to her music and also consider finding a way to see her live so you can feel that nostalgic, bittersweet emotion she portrays so well.