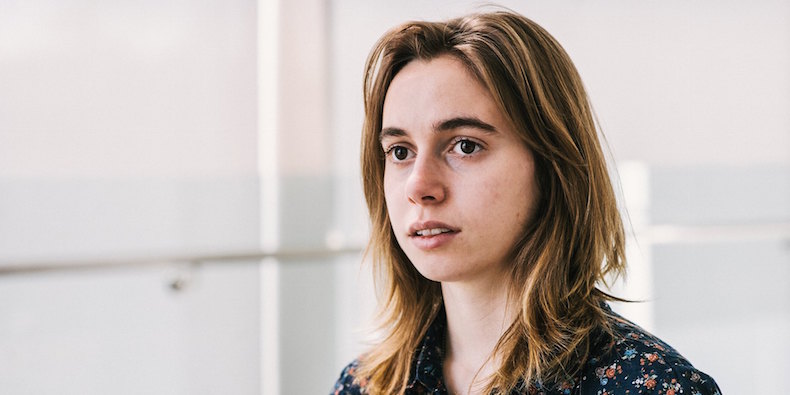 As the Mission Creek Festival begins to wrap up, I’m reminiscing on the shows I’ve been to in the past — none of them, however, can top what I just saw: Julien Baker at The Englert. Honestly, it was such a fantastic show. She was originally supposed to play at Gabe’s, but she sold that out so quickly that they decided to move her show to The Englert.

I showed up about an hour before her set and watched one of her openers — Squirrel Flower. I’m not here to review Squirrel Flower, but damn, they blew me away. The lead singer has a voice similar to Julien Baker’s, which made them the perfect opening act.

Finally, the lights dimmed, and Julien Baker casually walked on stage in her all-black outfit. She’s a tiny woman, but she is full of passion, which was apparent from the very first song.

Soft white lights beamed down on her as dark blue lights set the perfect backdrop for her slow, mellow songs. Her music is so mellow and quiet that you could hear pretty much everything that was going on in the audience — knuckles cracking, people flipping through programs, the clicks of a camera every time a picture was taken.

It was relaxing, though, to see a set like this. Honestly, Baker could put me to sleep — and that’s saying a lot, and I mean that in the best way possible. Her voice is so soothing, her guitar and piano work so smooth, and the softness in her music just makes me want to curl up and drift away. It’s very atmospheric, which I love so much.

At one point, she had a violinist join her for a couple songs, and w.o.w. it was amazing. The violin added so much dimension to her songs, so much that it almost made me regret taking up the clarinet and not the violin in middle school.

Baker switched between her electric guitar, acoustic guitar, and piano. Honestly, she’s so talented — normally I don’t see many artists switch it up that many times in a show.

One of the things I loved most were the mistakes she made — for example, she hit the mic stand with her guitar, took a step back, and bowed. It was so refreshing to see that she’s just a normal person like you and me. Which tbh, she kinda is — she’s only like a year older than me. Her sense of humor during that was one of the highlights of the night.

After singing a slow and mellow song, she would softly say “Thank you,” into the microphone.

Baker is a singer/songwriter from Tennessee, and she released her debut album in 2015 called “Sprained Ankle” on Bandcamp. Her most recent LP, “Turn Out The Lights,” just came out in 2017. Her music is the perfect music to chill to, vibe to, cry to, study to, etc.

The night soon wrapped up, and Baker walked off the stage just as casually as she came on. I’ve been to a lot of Mission Creek shows, so believe me when I say that this was one of the best.