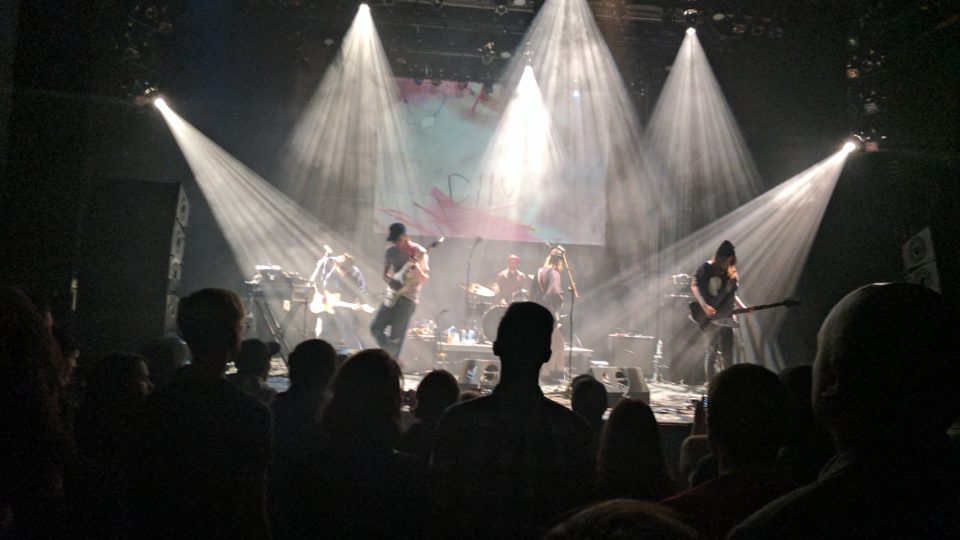 DIIV ended up playing almost an hour longer than scheduled for.

If you weren’t there, you missed a lot.

The night started with Karen Meat, local darlings from Des Moines. The plucky ensemble, bathed in blood-red stage light, took to the stage with messy hair and all-black ensembles. Their driven sound was both pleasant and aggressive, synthesizing magical trills as the trio bobbed about and giggled. Singing about the world ending, Arby’s, and pissing people off; Karen Meat was comfortable, conversational, but not sloppy whatsoever. I think my favorite part of the performance was when, at the end, the omnichord was being strummed by a drink.

When DIIV appeared, the stage transformed into a oceanic blue – rather fitting for the headliner 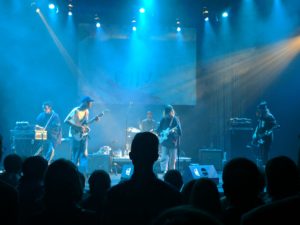 (pronounced “dive”). They were enchantingly chill. Effortlessly cool. They would look just as cool hanging out on your couch as on stage. Appearing perfectly disheveled with their slightly oversized clothes, frontman Zachary Cole Smith greeted the audience members shouting, “I love you!” and such; even recognizing a few faces in the crowd.

An alternative playlist staple, their indie rock is dreamy – unfussy, moody, alluring, but still tight. Playing favorites like “Under the Sun” – the song I first discovered them through – the crowd was either banging their heads or glued to the performance in a trance-like stupor. There were a lot of howling fans in the crowd, and Smith kept up the conversation between songs. The band was relaxed and in no rush tuning in between songs; there were a lot of good-natured “f*ck its” to go around.

But between all of the laughs, there was something profoundly acute within their cool-blue sound. Prefacing a track, Smith candidly said it was “about doing drugs, but I don’t do drugs anymore”. “Dopamine” features lyrics alluding to that past:

Shots ringing out, I’m soaking
Eardrums shaking, years start weighin’ me down
Crawling out from a spiral down
Fixing now to mix the white and brown
Passing out, running in place
You’re the sun and I’m your cloud
Burning down, running in place
Got so high I finally felt like myself

But the performance wasn’t grave or weighted down. There was almond milk. Smith took requests multiple times, light-heartedly passing ones that didn’t feel right. The band seemed to be in their own performance-induced nirvana. Someone even ran on stage to dance and was escorted off (disclaimer: you’re not supposed to do that). I was happily stupefied the entire show, and hadn’t even noticed they stayed way past the scheduled end of the concert – 10:00 PM.

At 10:28, Smith announced that the band would be taking a break for some Silk almond milk. He then returned with Colin Caulfield (keyboard and guitar) to do a cover of Alex G’s “Soaker”, something Zachary said they never practiced or performed before. And then everyone got back on stage to play even more.

I didn’t walk out of the theater until 10:40, but I would have stayed if the show went even longer.

(like I did obsessively for a long, long time)