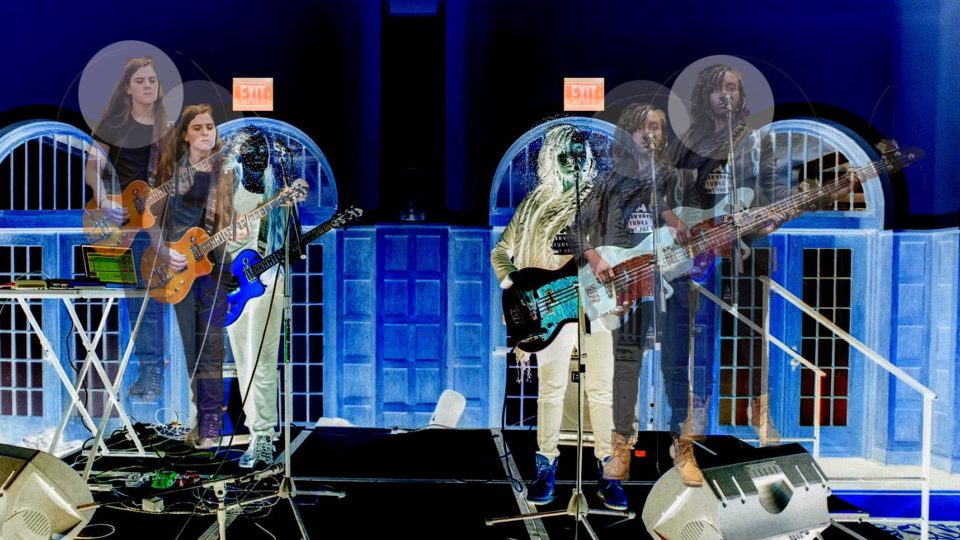 “I didn’t realize Princess Leia could play guitar so well.”

Of course my friend was joking. Or was he? Collidescope guitarist Madi — identified by first name only on Facebook and Bandcamp; she’s like Prince, apparently — practically invited the comparison, with her impressively fist-sized twin braid buns and flowing white chemise, but let’s pretend for a moment that her penchant for Alderaanian fashion goes beyond mere imitation.

I mean, why not? If any Iowa City act is currently harboring a Jedi space princess among their ranks, it’d have to be Collidescope.

The vastness of space and the mysteries of the intergalactic are their chief aesthetic and thematic obsessions; heck, even their Mission Creek promo identifies them as aliens shipwrecked on planet Earth. After seeing them at the Yacht Club Thursday night, I’ll believe it.

Collidescope didn’t perform songs last night so much as they employed sound and light to draw their audience out of this world and into theirs.

The atmosphere at the Yacht Club itself became something like a sensory deprivation chamber when the duo stepped on stage. The entire venue, save for the stage itself, was plunged into near total darkness, while the bone-shaking drone the group chose to open the performance with drowned all other sounds into imperceptibility.

And what did that leave the audience to experience?

Just the duo itself and their exquisite siren’s song of an opening track. There were no drums, and I’m not sure there were any lyrics, just Madi’s down-tuned electric drones accompanied by vocalist’s Hadiza Sa-Aadu’s borderline-angelic, wordless, single note song.

I get why you might be skeptical at this point, and were I recounting the concert to you as a friend I’d be tempted to throw up my hands and say you had to be there, maaaan.

Being an author tasked with reviewing the show in a more formal capacity, however, I’ll do my best to convey why it was such a special moment.

Standing in the Yacht Club before the stage, where it was so dark I couldn’t see my own hands and the music was so loud I couldn’t hear my own thoughts?

In those conditions, that one note song became the entirety of my sensory experience. Collidescope took a single drawn-out note and, for the few minutes Hadiza sung it and Madi played it, they turned it into an entire universe for the audience to immerse themselves in.

If not, I’ll reiterate: you had to be there, man. Some bands are just best experienced live, and Collidescope is one of them. With this band, it’s not about hearing the songs so much as feeling them.

Listen to them on Bandcamp or Soundcloud all you want — they deserve the support — but until you see them in person and feel their monolithic, oceanic drones shake you down to your bones, you haven’t experienced the band to the fullest. Trust me on this.

So if the rumors of Collidescope’s intergalactic origins are true, let’s just hope they chose to stick around Iowa City for a while. They may not be of this world, but we’re all the richer for it when they’re so incredibly gifted at pulling us into theirs.