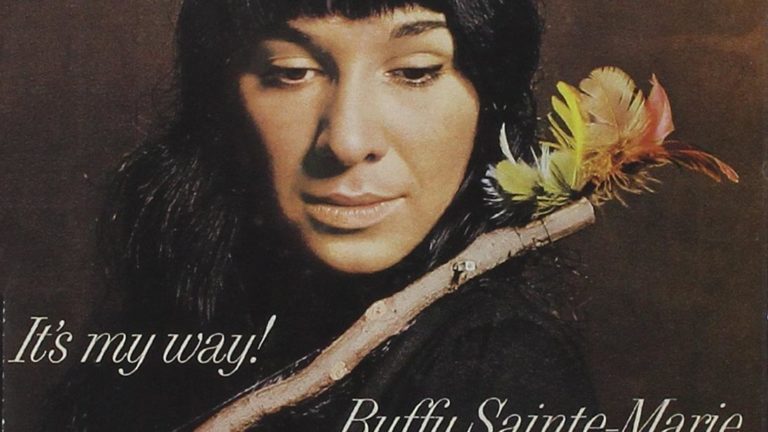 This week on Stella, we’ll be discussing Buffy Sainte-Marie, her album “It’s My Way!”, and her advocacy for the rights of indigenous peoples.

Buffy Sainte-Marie is a Canadian singer-songwriter and visual artist born in 1941. She released her first album “It’s My Way!” in 1964 when she was 23 years old. While the album never charted, it was still deeply influential in the folk genre and to Native American peoples.

Buffy Sainte-Marie, along with being a talented songwriter and singer, is also one of the most recognized advocated for the rights of indigenous peoples throughout the Americas. She focuses on protecting the intellectual property of Native peoples and fights against the exploitation for Native American artists.

Her passion against the mistreatment of indigenous peoples is evident from the first song on her album titled “Now That the Buffalo’s Gone”. Sainte-Marie uses the near-extinction of the American buffalo as a metaphor for genocide against native peoples by the Europeans. The song is so powerful that it is now considered a classic folk protest song.

The final verse says the most to me: “Oh it’s all in the past you can say / But it’s still going on here today / The governments now want the Navajo land / That of the Inuit and the Cheyenne / It’s here and it’s now you can help us dear man / Now that the buffalo’s gone.”

“The Old Man’s Lament” is a very depressing song sung from the point of view of a man is raising a son that he knows isn’t his. “She goes out every night to a ball or a party / And leaves me here rockin’ he cradle alone / The innocent laddie he calls me his daddy / But little he knows that he’s none of my own.”

“Ananias” is a song that surprised me to hear. Ananias was a member of the early Christian church in Jerusalem, and suddenly died after lying to the Holy Spirit about money. After his death, people started to fear the Lord. The lyric “Ananias, Ananias / Tell me what kind of man this Jesus is, my Lord” is repeated for the majority of the song.

“Mayoo Sto Hoon” is a beautiful song, and I’m really sad that I could find lyrics or translations anywhere. The song is sung in (I’m assuming) a Native American language that I do not know, and I wish I couldn’t found any information about it. Until I can find out more, all I know is that Sainte-Marie’s vocals sound absolutely lovely on this slow-paced, calm track.

“Cod’ine” is about addiction to the pain medication, codeine. “You’ll forget your woman, you’ll forget about man / Try it just once and you’ll try it again /  It’s sometimes you wonder and it’s sometimes you think / That I’m a-living my life with abandon to drink / And it’s real, and it’s real, one more time.” Since there is, unfortunately, such little information about Sainte-Marie that I can find, I am not sure if this song comes from personal experiences or if there is another inspiration for this song.

The song begins to kind of drag on near the middle, since each verse ends with the same repetitive line, but I imagine this is a representation of addiction. The song was later covered by Janis Joplin and appeared on her album “This is Janis Joplin 1965”, though she changed some of Sainte-Marie’s lyrics.

“Cripple Creek” is an Old Time Appalachian folk song that has been popular since at least the early 1900’s. It definitely sounds out of place at first on “It’s My Way!” but it’s also really neat to hear Sainte-Marie recreate one of the very first folk songs since she would go on to influence the genre herself. It is a fun, uplifting song to listen to, and is a welcome break here.

“Universal Soldier” became one of Buffy Sainte-Marie’s most famous songs, especially so after it was covered by the popular artist Donovan. The song tells the story of a soldier that believes he is fighting for peace, but doesn’t recognize that he is part of the unrest. This song became a definitive anti-war anthem for the 20th century.

“Babe in Arms” is the story opposite of “The Old Man’s Lament”. In this track, a pregnant woman already mothering one child is stuck at home alone while her husband is away drinking and living a freer life. To end the story, we get the lyric “And were it not for this wee baby / Well, you know what I’d do / Ooh, to my fine man / Ah, don’t you know, I’d shoot him and put an end to his life of sin.”

“He Lived Alone in Town” is perhaps the most melancholy song on the album. It tells the story of a man who is left by a woman he loves. While they both love each other, she leads him on a chase to find her, though she knows will never end and she will not be with him. The song ends with the lyric “So, wander with me now / Or wander off alone / But know I love you, tearful one / Much more than I can show.”

“You’re Gonna Need Somebody on Your Bond” is another traditional folk song Sainte-Marie covers on this album. Her rendition is very quick and upbeat, but has a daunting message. “You’re gonna need somebody on your bond / Way after midnight when Death comes a-creepin’ in your room.” Blind Willie Johnson, a blues musician this song is accredited to, says the song deals with the idea that one needs a legally binding contract in order to get into heaven. Donovan also covered this song after it was on Sainte-Marie’s album.

“The Incest Song” is an incredibly morbid story. The lyrics describe the death of a woman carrying the child of her brother. The woman’s brother is in love with her, but chooses to stab her to death since he’s been given a bride by their father. He then goes to his wedding directly afterward, where his father asks why he’s crying so much. This would have to be my least favorite song from the album, both because it isn’t as musically interesting and because the subject matter is a little too out of place for me.

The lyrics of “Eyes of Amber” are lovely in their imagery.  It is a song about the lessons of love, or about the person who teaches someone how to love, even if it is a self-taught love. “Heart of fire light / Heart of the flowers of the / Jungle / Heart of snow / You come again and you are / Midnight wind.” The fleeting feeling this song gives is very light and precious.

And finally, at the end of the album we get the title track, “It’s My Way”. I really, really wish that I could say I liked this song, and I do like the message an independence that Sainte-Marie is claiming within it. However, the song is very repetitive, with almost each line beginning with the words “I’ve got my own” and very little variation in the guitar accompaniment. I wish there had been more poetic lyricism, but I still appreciate the meaning.

As I was researching Buffy Sainte-Marie, I became more and more shocked that I hadn’t heard anything about her ever before. She was covered by Janis Joplin and Donovan, both extremely popular artists in the 60’s, but of course there is endless information about both of them.

She penned the most popular anti-war anthem in the era where the United States was arguably the most anti-war it’s ever been. She influenced folk music as a whole, a genre that was extremely popular at the time. She is still doing this hard work today at 77 years old and yet, as hard as I look, I can find barely any information about her.

The album as a whole is very classically folky and very quick to listen to. These thirteen songs together are only forty minutes long, and I wish there was more. This time of year, when it’s still cold but also kind of like  spring, make me crave folk music like no other. Of course, this won’t end until the end of the summer, so this album will make a great addition to the playlist I’ll be listening to for the next six-ish months.

Something else to check out: Buffy Sainte-Marie’s “Medicine Songs”. These songs were created to not overwhelm or oppress any group of people during the tense political climate we’re living in right now. Sainte-Marie says these songs are meant to enlighten and uplift those who hear them, and are meant to motivate the listener to fight for their rights and beliefs.

Listen to both “It’s My Way!” and “Medicine Songs” below!