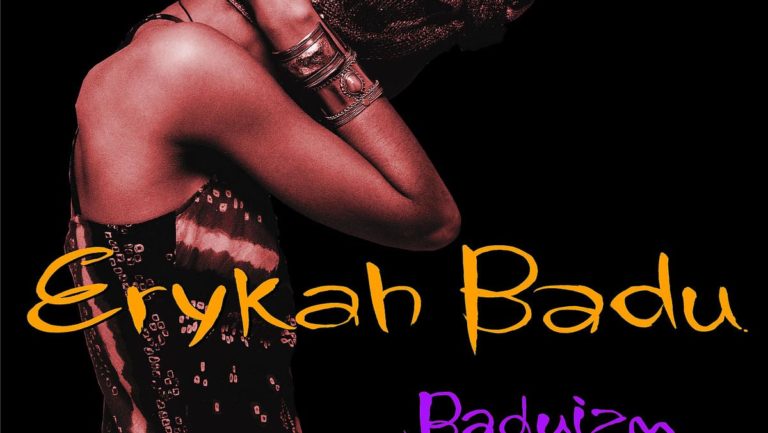 For this week’s Stella, I’ll be discussing Erykah Badu and her debut album, “Baduizm”.

Erykah Badu, born Erica Wright, changed her name in her youth. She believed that “Erica” was a slave name, so she added the term “kah”, a word meaning “inner self” to the end. She came to choose “Badu” as her last name as it was her favorite scat sound in jazz music.

Released in February of 1997, “Baduizm” went triple platinum after it spawned three singles: “On & On”, “Next Lifetime”, and “Otherside of the Game”. The album firmly planted Badu as a staple of neo Soul music, perfectly blending jazz and hip-hop to create a new genre.

“Basuizm” begins with a bassline and leads into the beat of a drum with “Rim Shot (Intro)”. The drumming technique used is the namesake of the song; when a drummer hits the rim of the drum as well as hitting the drum, it’s called a rimshot.

This song lays the foundation for the rest of the album very nicely. It exudes classic jazz and modern R&B. Combined with Badu’s perfectly catered vocals, there is no question that even the first track from “Baduizm” paved the way for neo-Soul as an established genre.

“On & On”, Badu’s first single, is the second track from the album. This song really showcases Badu’s writing talent. She was able to make many references to the same concept: a circular figure or motion, kind of like karma.

“The world keeps turning” and “My cypher keeps moving like a rolling stone” are just two examples of lyrics that point toward this cylindrical motion. Badu also makes references to her astrological sign, Pieces, whose image is two fish swimming in a circle.

The song reflects the idea that life goes on (& On) through struggles if we have faith. Badu’s faith in this respect goes toward a God. “Most intellects do not believe in God but they fear us just the same” and “If we were made in his image then call us by our names” are lyrics Badu uses to express her religious beliefs. Though I am not religious, the song still really resonates with me in another kind of spiritual way.

Religious motifs continue in the opening monologue of “Appletree”. Badu addresses her listeners are “the Creator’s righteous children”. The title “Appletree” and Badu’s lyrics mentioning “picking fruit” could be a reference to the Garden of Eden.

After the first three tracks of the album, “Baduizm” begins to focus for a while on complex love.

“Other Side of the Game” discusses the story of a new mother who stays at home alone while her husband or boyfriend is out making money to pay the bills.

“Next Lifetime” begins with a discussion between Badu and one of her friends, explaining that while she can see herself with him, she can’t leave her current relationship.

In “Afro (Freestyle Skit)” Badu uses her and her boyfriend’s hair to describe their relationship. When he promised her tickets to a Wu-Tang Clan concert, she got her hair put in cornrows and his afro was flat on one side.

“Certainly” had become one of my favorites for its lyrics. “Who gave you permission to rearrange me / Certainly not me.” “Was not looking for no love affair, baby / And now you wanna fix me.” “The world is mine / when I wake up / I don’t need nobody telling me the time.”

I choose to interpret this as Badu’s commentary on unsolicited attention, assault, or men that are far too persistent when it’s been made clear there is no common interest. I finally have the perfect tune to play when I get fifteen Facebook message requests from the same strange man just saying “hey.”

“Certainly” is reprised later in “Certainly (Flipped It)” as the second to last song of the album. The two renditions are completely different, as the second is more groovy than it is jazzy. The tempo is quicker, the octave is higher, and Badu comes of as sassier. Both are still absolutely beautiful.

These songs in particular do an excellent job of showcasing Badu’s vocal talents. Her voice is perfect for the slow-moving jazz accompanying these complicated tales. Throughout “Afro (Freestyle Skit)” the listener is able to feel Badu’s personality more. She is giggling in the beginning, and since she sings with minimal musical background, there is more room for her to tell a story with her voice alone.

The album takes a musically stylistic turn from this point on. Especially since the previous four love songs were so similar, the change was almost striking. The songs move from slow, deep jazz rhythms to those with higher energy. This change also comes about in lyrical context. Badu isn’t always singing about sad romances or heartbreak anymore, but brings in a theme of hopefulness.

“4 Leaf Clover” is the first song on “Baduizm” that immediately strikes me as different from the rest. Badu isn’t the only vocalist on the song. There are several harmonized voices layered behind Badu’s throughout the choruses. I miss Badu’s voice as a feature in this track. I’d grown attached to it from the beginning.

“No Love” has a beautiful intro. Badu jazz scats her way into the song. While the song is about unrequited or underappreciated love, the music itself doesn’t feel sad, but rather optimistic. I feel conflicted about this song for this reason. I wonder what kind of emotional reaction Badu wants her listener to have. I feel like this song should make me frustrated or angry, but I’m confused about it instead.

“Drama” is a song that I think we could all use right now. It focuses on persevering through different kinds of oppression, namely different layers of racial segregation. “So tired of hearing people say / how can we go on?” Badu tells us in this song that there isn’t room for giving up in the fight for equal rights and recognition.

“Sometimes” tells the story of one last complicated love story. “Sometimes / I don’t love you anymore / Sometimes / I’m in love with you.” We heard a little bit of this track earlier in the album with “Sometimes (Mix #9)” which provided a short preview of the full song and gave a nice, forty second break in the flow of the album.

“Baduizm” ends it’s show with another recording of “Rim Shot” which begins with applause. This really allowed the album to go full circle and feel like a completed project. It also ties in with the karmic motif from “On & On” in the beginning of the album.

I would definitely listen to this album again even if it was just Badu’s vocals on their own. This album feels vulnerable and powerful and confident and insecure simultaneously. Erykah Badu is an original artist. She was the first person to create any music like what is featured on “Baduizm”, and she was also a woman of color in a field largely donimated by men.

Badu has been a huge inspiration in many ways, but has also had her share of recent controversy.

In late 2016, Badu sang at a benefit concert in Detroit to raise funds for testing over 11,000 untested rape kits. 81% of these rape kits belonged to women of color. This was an excellent way for Badu to use her fame to advocate for thousands of women (nearly 9,000 of whom were women of color) who didn’t get the chance for justice they deserved. She also has her own charity called B.L.I.N.D., which provides community development for inner-city youth through multiple art forms.

However, Badu has come under some scrutiny in Janurary 2018. In an interview, Badu said that she “saw something good in Hitler” and went on to defend Bill Cosby, who has been accused of years of sexual abuse by over 60 women. This is odd coming from a person who has clearly been a leader in human rights, including those of women who had been sexually assaulted or raped. These statements are incredibly polarizing in the present political climate.

Badu went on to release seven more albums after “Baduizm” including two mixtapes and one live album later in 1997. Her most recent is the mixtape “But You Caint Use My Phone”.

In one of the tracks “Cel U Lar Device” and throughout the album, Badu samples Drake’s “Hotline Bling” to, in my interpretation, illustrate the woman’s side of the story or to introduce the potential double standards represented in his original song. Of course, it could also just be a cover.

More about this mixtape can be found in this Rolling Stone article. I would highly recommend listening through it!

Listen to Erykah Badu’s album “Baduizm” below or here.