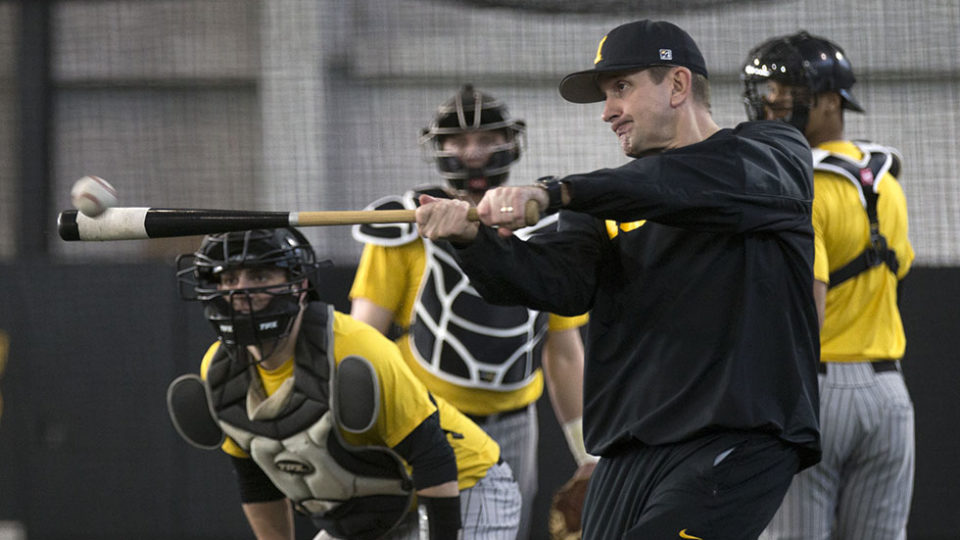 IOWA CITY, Ia. – For a long period of time, Iowa Hawkeyes baseball was an afterthought. In the fifteen years between Duane Banks’ retirement and Rick Heller’s hiring prior to the 2014 season, the Hawkeyes had just two winning seasons.

In Heller’s 4 years with the program? 4 for 4, plus the team’s first Big Ten championship since 1990 last May.

Heller has led the Hawkeyes to two NCAA regionals in his four seasons. Iowa had only made three in the program’s entire history before he arrived.

It’s not difficult to see why excitement is at an all-time high for the Hawkeyes baseball program. Upwards of at least twenty different media personalities were in attendance for Thursday’s media day festivities, a sight that would have been unthinkable under the previous regime.

“Last year sometimes we kind of crept up on some teams,” said sophomore outfielder Ben Norman. “This year, they’ll know that we’re a serious team.”

The Hawkeyes’ run to the Houston regional last May and abundance of talent returning has already led to some preseason accolades. Junior outfielder Robert Neustrom has been tabbed Preseason Big Ten Player of the Year by both Perfect Game USA and Baseball America.

“It’s special, but I still got a ways to go,” said Neustrom, who was an All-Star on the prestigious Cape Cod League last summer. “It was unbelievable,” Neustrom said of his Cape experience. “It’s an experience I’ll never forget.”

Neustrom has also been noted by several publications as a potential high draft pick in June’s MLB Draft after his strong summer.

“Inevitably, [the draft] is going to be on your mind,” he said. “Nothing’s guaranteed in the game of baseball. I just gotta keep focusing on the process, coming to practice every day, working hard.”

The Hawkeyes will have to replace the power bat of Jake Adams, who left Iowa for the Houston Astros after one season in which he was named Big Ten Player of the Year, as well as stalwart shortstop Mason McCoy, who signed with the Baltimore Orioles. Iowa will also have to contend with the temporary loss of Chris Whelan, who had Tommy John surgery in the offseason and has an uncertain timetable to return.

Luckily, the lineup has a collection of veterans and newcomers to help even out the losses.

Senior catcher Tyler Cropley is back after a year in which he hit to the tune of an .830 OPS and played stellar defense behind the plate. Matt Hoeg, Grant Judkins, and Mitchell Boe are all back after significant contributions in 2017, and all can slide around the diamond to combat the losses of Adams and Whelan on the infield corners. Kirkwood transfer Lorenzo Elion has also taken reps at third and appears likely to be the early season starter.

As for the pitching staff, the Hawkeyes’ outlook is a little more bleak. All three of last year’s weekend starters have moved on, with Nick Gallagher and Ryan Erickson signing professional contracts. Heller named Nick Allgeyer, who missed all of 2017 with Tommy John surgery, as the opening day starter next Friday against Toledo. Cole McDonald, who made 11 starts in 2017, will start on Saturday, with Sunday still up in the air.

“[Being named Friday night starter] is a big privilege,” said Allgeyer, who was a bullpen stalwart in his first two years with the Hawkeyes. “I gotta do my job and live up to it.”

Heller also said that he is playing the waiting game with highly-touted junior college transfer Brady Schanuel. The two-time MLB draft selection pitched limited innings in the winter with a rotator cuff issue, and Heller said he most likely will not be available to start at the earliest goings, instead working mainly out of the bullpen to limit innings and stress on his arm.

The bullpen in total should be a strength for Iowa in 2018. Four of Iowa’s top five relievers from last season in terms of innings – Nick Nelsen, Zach Daniels, Shane Ritter, and Kyle Shimp – are back. Iowa also has a number of intriguing arms from the freshman class including lefties Jack Dreyer and Cam Baumann and right-hander Ben Probst.

“I like the depth of our pitching staff,” said Heller. “The bullpen is really deep and really strong.”

Heller was also excited about the prospects of Iowa’s schedule, which he called the “strongest the program’s ever had.” The Hawkeyes catch no breaks with the Big Ten scheduling, catching most of the projected top teams in the conference – Nebraska, Ohio State, Indiana, Michigan. All of those series, besides the Huskers, are at home at Duane Banks Field.

Heller also put together a weekend set with Big 12 powerhouse Oklahoma State in early May, during Iowa’s Big Ten bye weekend. “That’s a sign of where the program is,” he said, “They know the RPI is good, it’s a good game for them.” Heller also said that a trio of annual contenders from California – UC Irvine, Saint Mary’s, and Cal State Northridge – will visit Iowa City in future years.