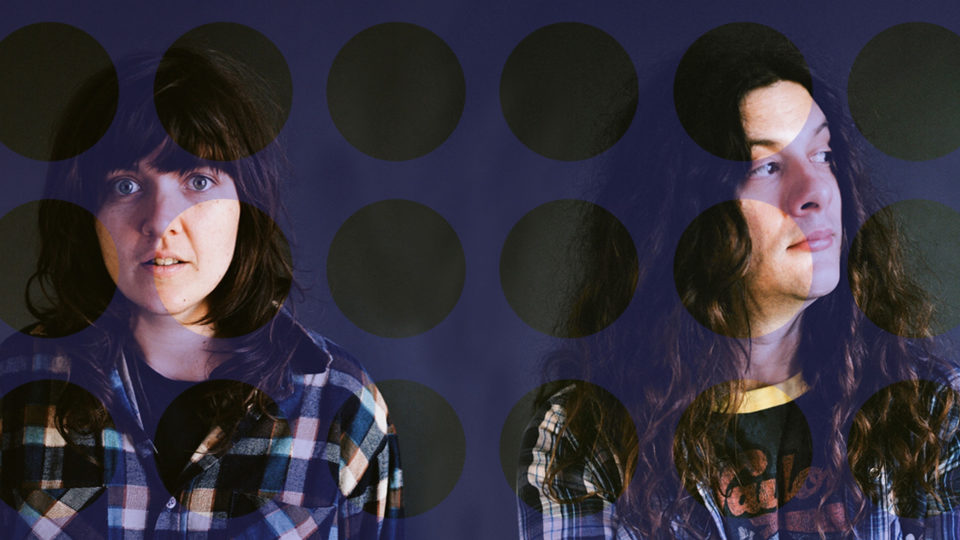 Okay, I’ll be the first to say it: Kurt Vile is a weird-looking dude. The prominent folk-rocker definitely looks more like a gangly teenager than a 37-year-old father of two. His music also revolves around sentiments of alienation, disassociation, and any other “-ation” that appeals to existential weirdos. Somehow, he has managed to mark himself as a misfit even in the world of alternative music.

However, standing next to Melbourne-native Courtney Barnett, he manages to look somewhat normal. With dense, matted hair and round eyes like that of some kind of nocturnal marsupial, she balances out his weirdness. Against contrasting black and white backgrounds on the album cover, they are the perfectly imperfect duo. They are both also known for their lyrical dexterity and dry wit. Needless to say, I was excited for this album. The two of them joining forces has been a long time coming.

Over a year in the making, Lotta Sea Lice shows Vile and Barnett covering each other and their contemporaries with creative vigor. Over a brief 9 tracks, they reinvent their past and re-configure their present repertoires. While the album has some stylistic inconsistencies, it details a conversation between the two that is both intimate and brilliant.

Instrumentally, Vile seems to have taken control. Most of the songs on this album slowly meander, rather than charge ahead. Some particularly echo the ruminative nature of his his latest solo release b’lieve i’m goin down…. The slight pessimistic haze that hangs over “Continental Breakfast” harks back to the stark emotional honesty of “That’s Life, tho (almost hate to say).” Towards the end, “Let it Go” starts to sound a bit like “Wild Imagination.”

The sentiment of jaded weariness that drives these tracks is one that Vile is undoubtedly familiar with. The album resides more in his established territory than the persona that brought Barnett to prominence in A Sea of Split Peas.

But while a theme of aging runs prominently throughout, some of the most disillusioned tracks feature Barnett’s vocals taking over. In these cases, she transforms them from blunt and dejected to more optimistic, and, dare I say, youthful. The best example of this is her cover of Vile’s “Peeping Tomboy”, an originally lyrically wandering, alienating ramble on unemployment and depression. When it becomes “Peepin Tom”, it is almost something of a ballad, her vocals accompanied by a lone, recurring guitar riff. Unlike Vile, she adheres to the rhythmic structure of the verses, rather than sliding off of them.

Her delivery is one of complete honesty and vulnerability. She sings like someone recounting a past mistake, but beyond the initial punch of shame. Indeed, Barnett and Vile are both, with every risk of cliche that comes with the term, old souls, but her take on the track re-vitalizes Vile’s cynicism. “Peepin Tom” also reveals a side of Barnett that we don’t get from her usual deadpan droning on the banalities of life. The work of both artists takes on a new shape, and it results in one of the biggest highlights on the album.

Therefore, it’s not always doom and gloom with this combination. The harmonious blend of both their styles is arguably strongest and most accessible in the first track “Over Everything”. The song depicts a conversation between the two on their creative processes and philosophies. They echo, counter, and finish each other’s sentences as they take turns sharing songwriting habits. The folky toe-tapper gradually melds into sunny euphoria as it stretches past the six minute mark.

The track serves as a nice introduction to the album by showing how the two became friends out of mutual artistic appreciation. At one point, Barnett relates to Vile singing about his reckless habit of not using earplugs in his youth, saying that she hears him “on several levels at high decibels.” Corny? Perhaps a little, but when they reconvene into the chorus, a closer definition of bliss is hard to find.

Their cover of Jen Cloher’s “Fear Is Like a Forest” pays homage to its Indigo Girls-esque classic folk-inspired original. Its successor, “Outta the Woodwork,” channels dad rock in a way that is both richly sardonic and playful. The source of Vile’s profound vindication in uttering the line “Do you know you’re no good at listening?/ But you’re really good at saying everything on your mind,” in the latter track is a little hard to place, but not completely absent.

In both cases, Barnett and Vile sacrifice some ingenuity for a certain aesthetic, but they still execute it well. Strong instrumentals drive the idea of the persistent nature of pure love in “Fear Is Like a Forest.” In “Outta the Woodwork,” they capture sheer bitter resentment. Both tracks move with a distinct swagger, and both are haunting and irresistible.

While I wouldn’t consider Lotta Sea Lice either Vile or Barnett’s best work, the album succeeds in creating an entirely new beast. While it clearly relies on both of their influence, doesn’t sound like anything either of them would release on their own. It carries the ironic theme of finding comfort in growing older while never fully abandoning one’s snarky teenager phase. It may or may not have been one of the best albums of 2017. However, like a long, aimless conversation with an old friend, it feels warm, and desperately needed.

Lotta Sea Lice can be purchased on Bandcamp and iTunes.