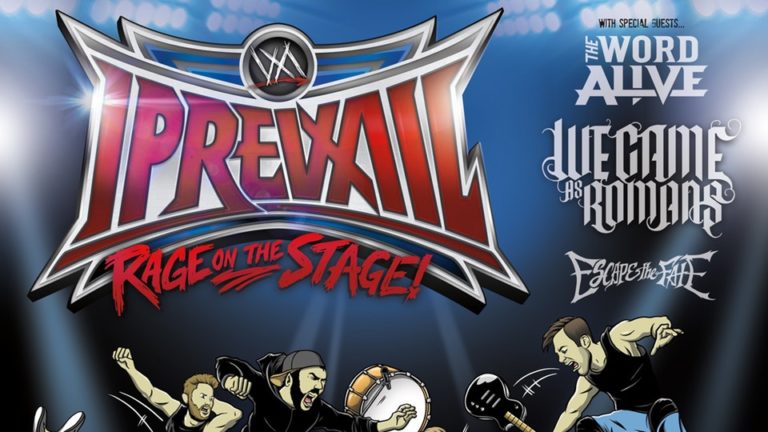 The Rage on the Stage tour made its last stop in Des Moines, Iowa, and the bands went all out. All four acts (I Prevail, We Came As Romans, The Word Alive, and Escape The Fate) put on one hell of a show.

Escape The Fate started the night off, playing hits like “Just A Memory,” “Ungrateful,” and “This War Is Ours (The Guillotine II).” Fans close to the barricade jammed out, while the rest of the crowd could be seen bobbing their heads. To be completely honest, the crowd kinda disappointed me — they were pretty weak for this being a rock show. I was expecting more mosh pits, more pushing, more sweat — none of which really happened. Nonetheless, Escape The Fate put on a great show, with guitar solos and screams scattered throughout the set.

The Word Alive was up next, a metal core band from Arizona. Earlier on the tour, lead singer Tyler “Telle” Smith broke his leg, and instead of pulling out of the tour, he sang sitting down. I give him mad props for that. It was fun to jam out to a new band that I hadn’t really heard too much from before, and the rest of the band still ran around the stage and got the crowd hyped up for the bands to come. They were pretty good, so I’ll definitely be checking out some more of their stuff.

We Came As Romans was next. I’ve known of them, but never really listened to them, which I’m now kicking myself for. Their musical style is described as post-hardcore and metalcore, with some melodic parts thrown in. Contrary to popular belief, their lyrics contain themes of positivity, like having hope, purpose, and morality — most people judge heavy music and assume the worst. Their stage presence was good, as they all ran around each other and sang along with the crowd. I ended up buying their latest album on CD which has now found its home in my car.

And finally, the moment we were all waiting for. Crew members hung a black curtain above the stage, shielding us from seeing what they were setting up behind it. After waiting for what felt like forever, the curtain finally dropped and I Prevail sailed in singing “Come and Get It.” Clean vocalist Brian Burkheiser sat out the rest of their tour due to a serious vocal chord injury, and guitarist Dylan Bowman stepped in to help with clean vocals.

Their setlist was stacked, with hits like “Stuck In Your Head,” “Chaos,” and “Scars.” A highlight of the night was definitely when the band played a cover of “Get Low” by Lil Jon, and also “Shots” by LMFAO. There was also playful banter between the band members, like Dylan saying unclean vocalist Eric had a “head full of pubes,” and Eric saying Dylan was a “fat Daniel Radcliffe.”

The best part of the night though? Crowd surfing.

The night wrapped up with more confetti raining down on us as we all scavenged the floor to find any remaining guitar picks and other souveniers that band members tossed out at the crowd. The post-concert depression sank in as soon as we left the venue.