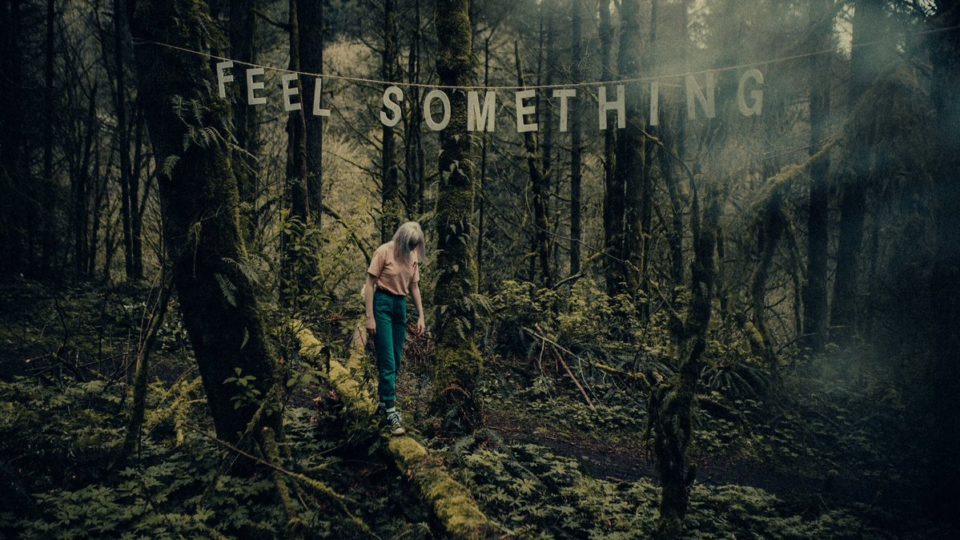 Movements‘ new album “Feel Something” is a deeply raw and personal album that quite literally makes me feel something. For this only being their debut full-length, I’m pretty impressed. Their EP “Outgrown Things” has lived in my car and traveled through many states with me, which has proven itself to be an EP perfect for a rainy day and a long drive. “Feel Something” is a step up from “Outgrown Things” but not too far off from it in terms of lyrical content and instrumentation.

Movements have set themselves apart from other acts in the genre. While from the outside they may just seem like another emo alt-rock band, their discography proves differently. “Outgrown Things” really showcased a lot more of the post-hardcore, screamy side of them, while “Feel Something” is a lot more toned down, with a spacey, ambient vibe.

I’m really glad that lead singer Patrick Miranda sprinkled in some spoken-word parts into the new album, because that was one of the driving forces for me in their EP, and what really set them apart for me.

The album starts off with “Full Circle,” a more upbeat sounding song that discusses the speakers’ depression (Sidenote: you’ll come to find out that Movements have upbeat sounding instrumentation with depressing lyrical content, kind of similar to Moose Blood.)

This track has one of the most memorable chorus’, with the lyrics “It comes in waves and I’m pulled below / It’s not subjective, it’s clinical / Drown myself in the undertow of all my imbalanced chemicals.” The outro is spoken in the classic Movements-style spoken word, something I was pleased to hear.

“Third Degree” is next, a song about desperately loving somebody so much. This person is their “third degree,” which I interpret as a lover that has caused them a severe amount of pain (as third degree burns are the most severe of burns) that they can’t stop coming back to. This is an alright track, but it’s not my favorite off the record.

Up next is “Colorblind.” This was the first single released, and I believe it’s a good representation of what this album entails. We see some more spoken screams in here, which is reminiscent of “Outgrown Things.” In terms of lyrical content, it takes a complete 180 degree turn from “Third Degree.”

Miranda uses his own colorblindness as a metaphor for love — there’s some colors that he can’t see, as there are types of love that he doesn’t see. He knows that these people he’s seeing are great people, but he’s incapable of loving them. “Is there something wrong with me? / This doubt is deafening / ‘Cause you were gold but I’m colorblind.”

“Daylily” is next, and presumably the fan favorite. At the beginning of the song, it offers the softer side of Miranda’s vocals, a nice touch paired with the perpetual melodic guitars. The instruments all crash together in the chorus, along with heavier vocals from Miranda. The entirety of this song just sweeps you off your feet and drift away.

“Deadly Dull” closes out the first half of the album, and man, this song hits you right in the gut with its outstanding lyricism and instrumentation. The speaker tells a story about watching a loved one suffer through dementia and Alzheimer’s, a subject not really discussed too much in the music world, if your family member is suffering from this, discuss the hospital vs assisting at home for their safety and preference.

I’ve never personally gone through this situation, but when I heard this live back at Warped Tour this summer, there was no holding back. The lyrics mixed with Miranda’s delivery really reels you in and gets you feeling what the speaker is feeling, and it’s incredibly heartbreaking.

We start the second half of the album off with “Fever Dream,” a completely acoustic track with a haunting melody. Honestly, the only special thing about this song is the reference to the title of the record which we briefly hear in the second verse. I think that they could have gone in a different direction with this song and gotten something better, but that doesn’t mean that I totally disregard this track overall — I think you just need to be in a certain mood to really appreciate it.

“Suffer Through” is a track that is powerful just like “Full Circle,” with a memorable chorus that pulls me out of my head and into the track. The lyrical content deals with more mental health issues, like a lot of tracks before. The outro is a little long, but I dig it. The softer spoken word feels more vulnerable and conversational.

We jump right into “Deep Red” with a gritty, kick-ass bass guitar opening. This is another song where we see the “feel something” lyric come up, which I like. The chorus sticks with me, something that I hope they play live just because of the bass and chorus. It’s that good.

“Under The Gun” is gritty and aggressive (both vocally and instrumentally), mixing the best elements of post-hardcore and emo genres together. It’s a killer track that I can definitely see being played live.

Second to last, we have “Submerge.” It’s ominous, however I find myself in a lull with this one. For me, it just kind of lacks that emotional punch that the rest of the album has, but by no means is it a bad track. It’s another one of those that I have to be in the mood to listen to, which I didn’t really feel with anything on “Outgrown Things.”

The album closes out with “The Grey,” which brings everything together and makes everything come full circle (ha, get it?). It’s as if Movements took all of the best qualities of this album and tied it into one song. This song is so expressive of all the feelings described on this album, and the spoken word outro really drives this song home for me. I’m super excited to get this record on vinyl so that I can hear this outro followed by that scratchy noise when a record is over.

Overall, I’d give this album an 8/10. This band will really be going places now, and I think you should take the chance to see them live if the opportunity falls in your hands — they put on a hell of a show that you won’t ever want to miss. I can’t wait to see some of these new songs live, whenever that will be.