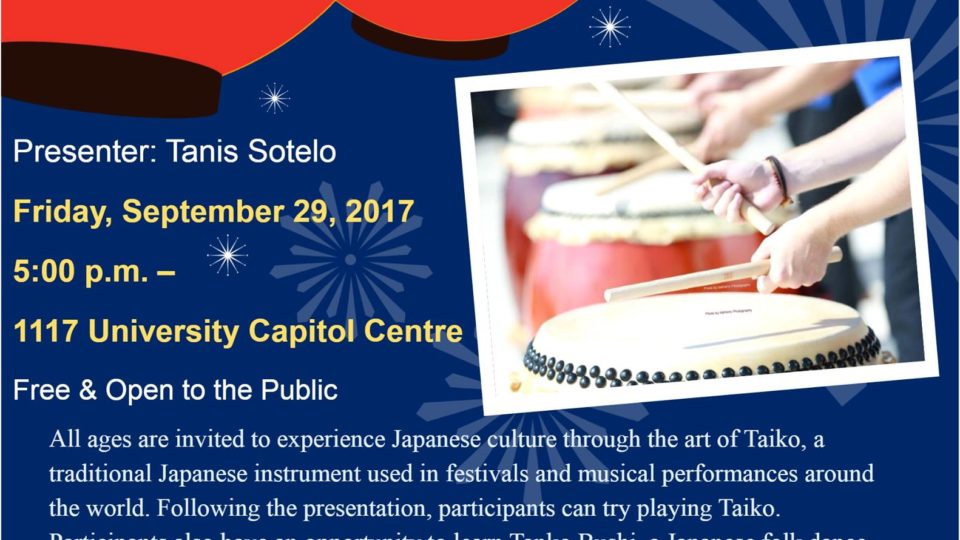 A few weeks ago, a fellow friend and I decided to attend a taiko presentation and a tanko bushi dance workshop hosted by the University of Iowa Japanese Program. Going into the event, we both had some preconceived notions regarding what the event would entail; however, while those preconceived notions focused mainly on the history and culture side of Japan, we can both honestly admit that the event itself was something beyond our own means.

Both taiko and tanko bushi, for those who don’t know, refers to two traditional art forms within the Japanese culture. Specifically, taiko refers to a broad range of Japanese percussion instruments, while tanko bushi, on the other hand, refers to a Japanese folk song. Together, both can be seen in festivals within Japan ranging from either religious significance to historical pinpoints.

At the beginning of the event, we both sat in the front – on my behalf – in order to get the full experience of watching a taiko performance alongside demonstrations of a tanko bushi. What we failed to do, however, was read the description of the event and understand that the event itself wasn’t simply just a presentation, but instead, a workshop.

Midway through the event, the presenter began calling out for volunteers to participate in the tanko bushi. Being who we are, my friend and I tried to scurry to the back of the room in a poor attempt to not get called on; however, we failed miserably because

one of the ushers stopped us and encouraged our participation. Not being able to say no, we both scurried to the front of the room, or rather at the end of the crowd, and began to perform a tanko bushi.

At first, we were confused and by that, I do not mean any simple confusion.

In our best attempts, we tried to follow along with the steps of the tanko bushi; however, it was in that moment that we both realized we severely lack any form of rhythm. While we were trying to dance, stay in step, and on beat with everyone else, I can assure you we did anything but. One thing I will note, however, that while we may have been two of the most horrendous dancers anyone in that room has ever possibly seen, we had fun.

From the beginning to the end of the tanko bushi, we had a blast trying to keep up with the steps and stay in line with everyone else. While we may have looked like some rhythm-less dorks, we were cute dorks, if I may say so myself.

Towards the ends of the event where our energy was slowly beginning to dissipate, we returned to our seats and listened to the history that surrounds both taiko and tanko bushi alongside watching, more than listening, to the presenter play a taiko. While in

most instances, you would listen to an individual play an instrument rather than watching, in this instance, it was amazing to watch the presenter play the instrument because it was not only a musical performance, but a physical one as well.

Sadly, words cannot do justice to the performance, so please, watch one here.

Once the event concluded, my friend and I decided to run away before another workshop could commence, but we will admit that the event was not what we expected and that we are pretty pleased with our decision to attend the event itself.

We both look forward to our next adventure and this time, I promise, we will read the full description of the event.